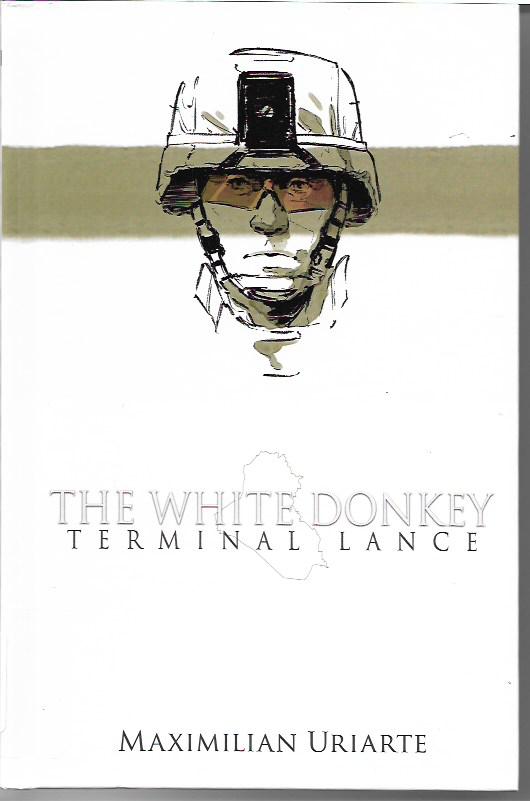 Tales of war and warriors are among the most fascinating, horrible and profound stories of the comics art form. When removed from the crass jingoistic tone that characterized the genre for much of its existence, such comics works can illuminate the human condition and draw readers into the experiences of the men and woman called upon to put their lives on the line for our lives or, far too often, for the economic or political desires of those who do not serve, have not served and will never serve their country and their fellows in this dangerous manner. If I seem to have climbed on to my soapbox, it’s because of this week’s pick of the week.

A New York Times bestseller, Maximilian Uriarte’s The White Donkey: Terminal Lance [Little, Brown and Company; $25] is an emotionally-changed graphic novel about a young Marine who faces the horror and the mundane realities of serving in Iraq. Abe enlisted in the Corps in search of something missing from his life. What he finds comes at a terrible price.

When I cite the emotional nature of this graphic novel, I refer to my emotions as I read it. I could feel the lump in my gut growing as I turned page after page. How can we put our young soldiers into situations like the then and now disaster that is the Middle East and do so again and again? How can we squander the potential of men and women who have so much to give our country in peace as well as in war? My jaw drops as Uriarte tells Abe’s story in crisp, to the point dialogue and drawings. There are more than a few moments that made me gasp or even choke as I read them. There were tears…for Abe, for his fellow soldiers, for my country.

Uriarte is am Infantry Marine and Iraq veteran, who enlisted at 19. He served four years as a MRAP turret gunner and as a combat artist and photographer. He created Terminal Lance while still on active duty. The strip is published in the Marine Corps Times. The White Donkey is the first graphic novel of the Iraq War written and drawn by an actual veteran of the War.

Released in April, The White Donkey: Terminal Lance deserves to be nominated for all applicable comics art and comics industry awards. It needs to be read…and not just by comics fans. Simply put, it is an unforgettable graphic novel. 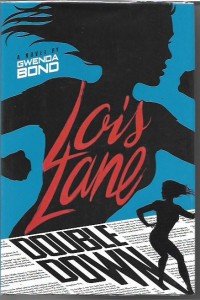 Lois Lane: Double Down is the second book in the young adult Lois Lane series by noted YA author Gwenda Bond [Switch Press; $16.95]. Weighing in at close to 400 pages, the novel is a solid thriller on every level. It has likeable characters, dastardly villains and a couple of players who fall somewhere in between. Even not so young adults – says the senior citizen reviewer – will enjoy it.

Bond keeps the focus on Lois throughout the book, but never slights other characters. We see more of what will make Lois an incredible reporter in the future. We get to know her mother and sister much better. We get to know her friends and other supporting players. We get new reasons to not trust Sam Lane, her father, and further than I could throw him. We get more of the online relationship between Lois and her “SmallvilleGuy,” even as we are introduced to a new online presence, the mysterious “TheInventor.”

I hope Bond is writing another Lois Lane book because she’s created an impressive Lois for modern readers. If she isn’t, I hope Switch Press has another writer lined up. This is a Lois Lane I definitely want to watch grow into the woman her fans have always known that she could be. I recommend this novel to Superman fans of all ages and genders. It’s a great read. 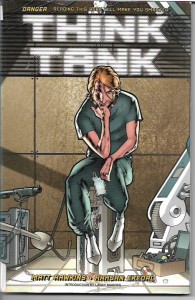 One of my favorite current comic-book series is Postal, the ongoing Image title by Matt Hawkins and Bryan Hill and Isaac Goodhart. The series, which I’ve praised in the past, is set in the very odd town of Eden, Wyoming. When I learned Postal would be crossing over with two other series created by Matt Hawkins, I went in search of those  earlier series.

Think Tank Volume 1 by Hawkins and artist Rahsan Ekedal [$14.99] came out in December, 2012, but is still in print, Its protagonist is David Loren, a genius recruited by the government when he was a teen. He’s the smartest scientist in the military think tank where he lives, but he’s grown increasingly opposed to the military using his creations for killing. Loren wants out.

David is MacGyver on super-science brain steroids. His success rate is higher than any other scientist in the think tank and would be even higher if he weren’t withholding some of his successes. But he’s considered such a high-value government asset the military would be willing to stick him in a dark hole or even terminate him to keep him from taking his talents elsewhere. That’s a challenge David can’t resist.

What follows is a fast-moving and very smart story. Even the more outlandish science stuff seems completely implausible within this collection of Think Tank #1-4. The story itself is reason enough to seek out this book, but the bonus features add considerable value to the collection: a cover gallery, the fascinating “Science Class” columns and previews of two other Image series, Echoes and Sunset. I’ve ordered both.

Think Tank Volume 2 is also on its way to me, but I couldn’t wait to let my Tips readers know how much I enjoyed the first volume in the series. For me, Hawkins has become a writer worth seeking out. I’m sure I’ll be writing about his other work in the future. In the meantime, check out Postal and Think Tank.