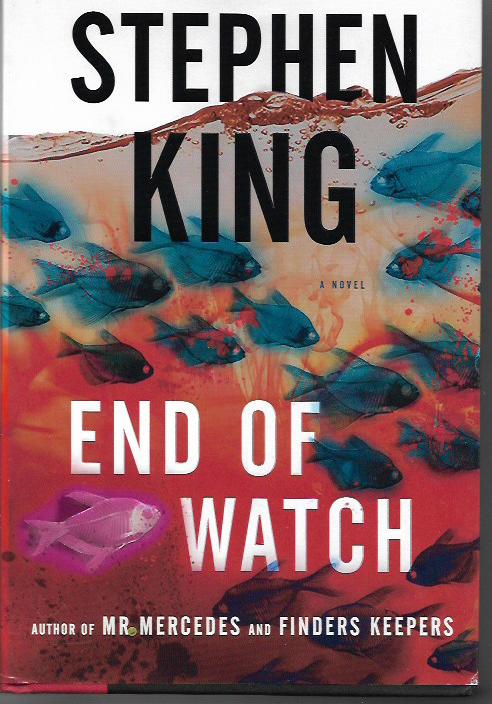 It’s not a comic book or graphic novel. It’s not a book about comic books or anything related to comic books per se. My slim rationale for choosing Stephen King’s End of Watch by Stephen King [Scribner; $30] as my pick of this week is that it does have a super-villain. Before I discuss this new novel, I need to make with a bit of “what has gone before.”

THERE ARE SPOILERS AHEAD

End of Watch is the finale of King’s Bill Hodges trilogy. Hodges is the retired police detective we met in Mr. Mercedes (2014). He is haunted by his most infamous unsolved case, the slaughter of people waiting in line at an early-morning job fair. Their killer ran them over in a stolen Mercedes and then drove the woman whose Mercedes he stole to suicide. The killer – Brady Hartsfield – is a computer genius and a sociopath.

Brady’s mistake is when he tries and fails to drive Hodges to suicide as well. He compounds that by trying and failing to kill Hodges, by accidently killing his own mother and by trying to go out with a suicide bomber bang at a concert. Hodges and his “team” – Holly Gibney, the niece of one of Brady’s victims, and Jerome Robinson, a young friend – prevent Brady from carrying out this massacre. Holly prevents the heck out of it by clobbering Hartsfield with her laptop until Brady’s brains are mush. The mad killer ends up in a coma and an institution.

Finders Keepers (2015) has Bill working as a private investigator with Holly and Jerome at his side. In this second book, the big bad is an obsessive fan who murdered a reclusive writer and, 35 years later, is seeking that writer’s lost notebooks. Hartsfield is not a major player in this novel, but King features him and reveals Mr. Mercedes isn’t quite as brain-damaged as we thought.

In End of Watch, Bill’s health is failing, though he tries to hide this from Holly. Meanwhile, an egotistical, immoral neurologist has used Brady as a test subject for experimental drugs. The treatment gives Brady the ability to act despite his ruined body. He’s going after those teens he failed to kill at the concert…and he’s going after Bill Hodges and his team. Which is as specific as I’m going to get here.

THE SPOILERS ARE OVER

End of Watch is as riveting as the best King novels. Hodges, Holly and Jerome are heroic, likeable and relatable characters. Pete Huntley, Bill’s former partner on the force, is a solid supporting player. Pete’s new partner is a detective more focused on advancing her career than doing her job. And Brady? He is a scary, venomous villain. The kind you love to hate.

End of Watch delivers heart-stopping thrills and horrific moments. Most importantly, it delivers a satisfying ending that feels right. Not only does King still have it, he’s never lost it. I will keep reading his books as long as he keeps writing them. 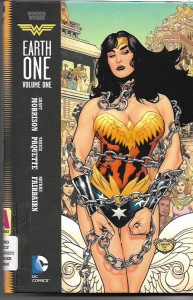 Wonder Woman: Earth One Volume One by Grant Morrison with artist Yanick Paquette and colorist Nathan Fairbairn [DC; $22.99] is the latest in the series that has seen modern-day reinterpretations of Superman, Batman and the Teen Titans. Some of those graphic novels have been brilliant, some less so. This one isn’t brilliant, but it is a solid and solidly entertaining work.

Morrison never soft-pedals either the oppression of the Amazons by abusive men or the lesbianism that naturally results as the warrior woman create their own island society. Paquette with his drawings and Fairbairn with his colors draw a sharp contrast between those two states of existence. The oppression is hard to take, the island is wondrously uplifting despite the secret dishonesty which lies at the heart of Princess Diana’s birth.

Morrison’s reinvention of Steve Trevor as a man of color who sees the parallels between Amazon and American history re: slavery and other deprivations and deceits. Etta Candy is gloriously reinvented as a unabashed bisexual whose confidence and joy of self is simply delightful. I love her and I love this graphic novel.

I highly recommend this graphic novel. You will read it and love it and then join me in anxiously awaiting Volume Two. 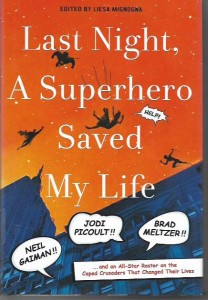 Edited by Liesa Mignogna, Last Night, a Superhero Saved My Life: Neil Gaiman!! Jodi Picoult!! Brad Meltzer!!…and an All-Star Roster on the Caped Crusaders That Changed Their Lives [Thomas Dunne Books; $25.99] is a collection of articles by authors about the comic-book heroes with whom they connected in a formative way. Those of us in the comics industry whose creative bent is to honor the essentially optimistic nature of the super-hero genre have long understood the power of our work to change lives for the better. More than I can express, I cherish the communications from readers who have told me they became teachers because of Black Lightning or found a key to strengthening their relationships in a scene I wrote decades ago. If you want to take the above as my disdain for comics creators and publishers who use super-heroes to act out their own darkest desires, feel free. They are damaged individuals incapable of appreciating or understanding the joy of the genre.

Back on point, Last Night is the mixed bag you’d expect from such an anthology of stories from diverse creators. A couple of them are pretentious and virtually unreadable. Most are intriguing. A few of them will touch your hearts and souls. Among the latter were the contributions from Delilah S. Dawson, Anthony Breznican, Alethea Kontis, editor Mignogna, and the three pieces on Wonder Woman from Carrie Vaughn, Leigh Bardugo and Jodi Picoult. There’s a lot more good than bad in Last Night and a fair share of great. I recommend it to readers whose interest in comic books extends beyond just the comic books themselves.