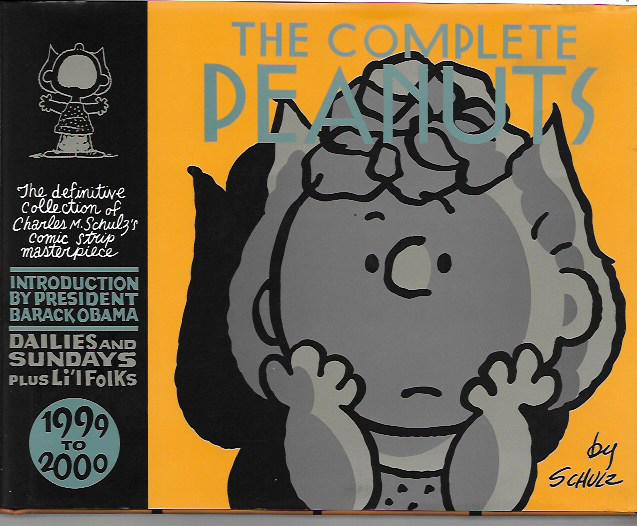 The Complete Peanuts 1999-2000 by Charles M. Schulz [Fantagraphics; $29.99] is my pick of the week. This 25th and final volume in the series collects the final thirteen-and-a-half months of the strip that redefined comic strips with its 1950 debut and continued to be a joy to its devoted readers and an inspiration to cartoonists all over the world for half a century. Indeed, since Peanuts reprints still run in many newspapers, the strip has continued to bring joy and inspiration in the 15 years since its creator’s death.

President Barack Obama, our first president to reference the comic books he read as a young man, wrote the foreword to this farewell volume. Calling Peanuts “an American treasure,” he wrote how this comic strip could bring one’s childhood rushing back: “That’s what made Charles Schulz so brilliant — he treated childhood with all the poignant and tender complexity it deserves.”

To me, Peanuts is always of the now. Even though I knew these were the concluding strips, I was still caught by surprise when I came to the last ones. Probably because Peanuts isn’t really gone and it will never be really gone. We can all still recall that one special strip or sequence that spoke to us so truly. We can close our eyes and see Charlie Brown and Snoopy and all our friends. Adults that we have become – and how the heck did that happen? – if we tried to speak to them, they would hear nothing more than bleating trumpets. Yet, magically, wonderfully, we can still hear them.

Also included in the book is the complete Li’l Folks feature Schulz did before he did Peanuts. This was a weekly feature consisting of three or four gag cartoons featuring a continuing cast of children (and a dog) not unlike Charlie Brown and his gang. Indeed, one of the kids is even named Charlie Brown. There were 138 installments of this feature, the building blocks of the international sensation that Peanuts would become.

Founded in 1976, Fantagraphics has published a stunning library of comics and books of all kinds and for all sensibilities. I couldn’t even begin to estimate how many of their books I have enjoyed and own. If I ever organized my Vast Accumulation of Stuff and go from boxes to bookshelves, it would not surprise to find a bookcase or two or three filled with Fantagraphics volumes. But, of all those amazing books, none of them have filled me with more sheer delight than their Peanuts collections. And, when I reach that far off day when I locate all of my Peanuts volumes and have them in one place, I’m going to read them again from start to finish.

Schulz is an American treasure. Fantagraphics deserves considerable praise for preserving his great achievement. Every public library, every school library, even comics reader’s library should include these books. They are golden dreams. 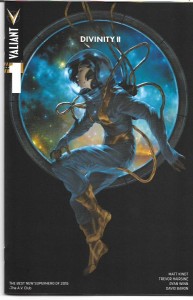 The Valiant Universe again reaches into the Unknown for Divinity II [$3.99 per issue] by writer Matt Kindt with artists Trevor Hairsine (pencils), Ryan Winn (inks) and David Baron (colors). In the first series, we learned how Russian cosmonaut Abram Adams and two of his fellow cosmonauts were sent deeper into space than anyone before. They met something Unknown. That contact changed Adams and gave him unimaginable powers. He became Divinity.

There was the expected clash with the forces of the West. It was a violent clash. Divinity won. Then he retreated into a reality that he created for himself. Those few humans who knew of his incredible power breathed a fleeting sigh of relief.

In this new series, Myshka, one of the other Cold War cosmonauts on that distant mission, has returned to Earth. With the same powers as Adams and no reluctance about using them in the service of her vision of Mother Russia and in her quest for vengeance towards the man who abandoned her in space. It’s on.

I’ve read the first two issues of this second series and there are seriously frightening moments in them. Myshka herself is as scary a villain as I’ve seen in the Valiant Universe and that is saying something. I can’t wait to see what happens next.

What you can expect from this series is fine writing that is also friendly to new readers. Even if you didn’t read the first series, Kindt and a concise “what has gone before” page will bring you into the ongoing adventure. Hairsine’s drawing and visual storytelling are first-rate, full of dynamic action and gripping emotion. Winn and Baron tie it all together with excellent inking and color work. This is a darn good comic-book series.

Divinity collects the first four-issue series in a 112-page, full-color trade paperback. Divinity II will be published in September. I recommend both. 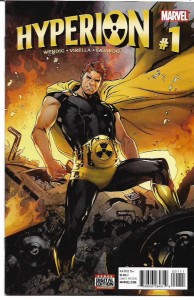 I wasn’t expecting much from Hyperion #1-2 [Marvel; $3.99 each) by Chuck Wendig with artist Nik Virella. It’s a spinoff from the new Squadron Supreme series and I can’t say I’m a huge fan of that one. While SS has interesting concepts, it started out with the kind of cheap shock tactic on which too many super-hero titles have come to rely. The shock was accompanied by a Marvel executive’s apparent glee over the decapitation of a Marvel Universe icon, which further pushed me from any regard for Squadron Supreme. Some people should not to get to play with other people’s toys. Strike three came from this Hyperion incarnation being created by Jonathan Hickman, who has worked his way onto my no buy/no read list.

That said, I’m intrigued by the notion of a super-hero taking some time off to contemplate the violence, including committing murder, of his life while questioning what kind of hero he wants to be and even if he wants to be a hero. This Hyperion is still an arrogant and callous jerk, but I give him points for considering a different and perhaps better way.

Two issues haven’t been enough for me to decide if I like this new series. I know I like some things in it, first and foremost among them a young runaway named Doll who has the power to nag Hyperion into occasionally doing the right thing. I like enough about this comic book to keep reading it for now.