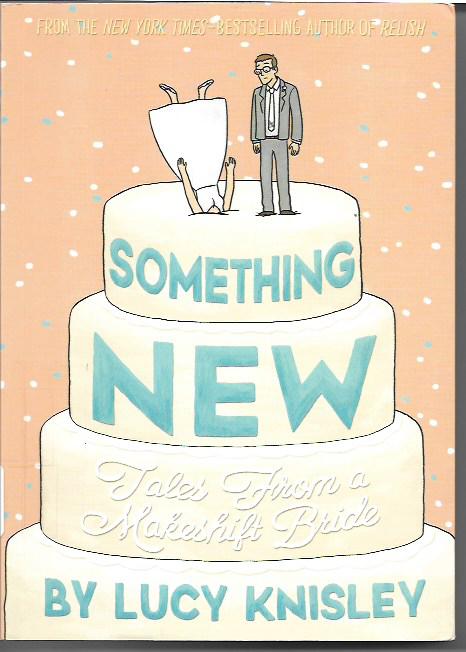 Cartoonist Lucy Knisley is a national treasure. If you need proof of that, you need only read her newest work. Something New [First Second; $19.99] is a nearly 300-page graphic autobiography charting Knisley’s journey to marriage.

Three years after Knisley broke with her boyfriend, John came back into her life and proposed. That which had divided them had ceased to be issues. To me, Lucy and John had clearly been “the one” for each other and, if that was all this book was about, it would still have been an entertaining romance tale. But, instead, Knisley has written a delightful hilarious, honest and sometimes frightening exploration of two outside-of-the-box lovers facing one of the most cherished institutions in our culture and finding a way to make it (mostly) their own.

Something New takes readers along each step of the way in easy-to-digest chapters. The sheer amount of human interactions and useful information in each chapter is staggering, especially considering the amazing addendums/epilogues to each chapter. Just forget about saying yes to the dress. Lucy and Jon should be the stars of a TV show looking at their wedding and then getting involved with other weddings. I’d watch that show in a heartbeat.

True confession. I cry at weddings. I’m not obvious about it or, at least, I don’t think I’m obvious about it. But I tear up at these things because the union of two people is either a beautiful thing or a horror waiting to be unleashed on the unsuspecting bride and groom. I’m 32 years into my wonderful marriage so I’m always hoping for the best at these things.

So, yes, I got a little teary at various times while reading this book. Sometimes Lucy or John would do something so wondrous that I shed a tear of joy. Sometimes I felt the sting of frustration when things didn’t do quite so well. Overall, I smile and laughed a lot more than I got all misty-eyed. This is a funny and life-affirming graphic autobiography. It’s my pick of the week and – say it with me – should be in every public and school library and in the home library of every true devotee of the comics art form. I’m ordering some extra copies to give out as gifts.

The CW’s Arrow is one of my favorite TV series, something it shares with both DC’s and Marvel’s comics-inspired shows. However, it was just recently that I first read any of the short Arrow comic-book-style stories posted online and in various print editions. I liked what I read.

Arrow Volume One [DC Comics; $16.99] features nineteen short comics stories by a variety of writers and artists, among them the show’s executive producers Marc Guggenheim and Andrew Kreisberg, and Mike Grell, the legendary creator whose Green Arrow work is the standard by which other interpretations are weighed. This first volume was published in 2013 and has had additional printings since then.

These stories take place around the televised episodes. They add to those episodes and reveal background and other secrets only hinted at in those episodes. Each story is ten pages long and manages to tell a complete and satisfying tale in those ten pages. There have been times when I have felt such compact storytelling was a skill lost to the comics ages. I’m pleased to see it is still practiced.

I don’t know if I’d classified any of the stories as great per se, but they are all entertaining and well done. The stories were done by many writers and artists, but every character is in character, and the visuals retain the action, drama and realism of the show. That’s impressive for stories of this length.

There have been three volumes of these Arrow comics stories. I plan to read the other two as soon as possible. 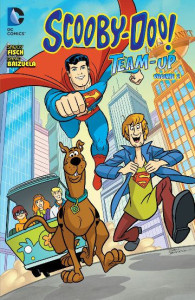 While Scooby-Do! Team-Up isn’t the weirdest take on the classic and beloved cartoon – I’m thinking DC’s forthcoming Scooby Apocalypse wins that “honor: hands down – it’s still pretty far out there. But I read Scooby-Doo Team-Up Volume 2 by Sholly Fisch and artist Dario Brizuela [DC; $12.99] last week and it just plain tickled me.

Scooby and his meddling kids go back into the past for a hilarious visit with the Flintstones, then go into the future to team up with the Jetsons. There are also adventures with Superman, Jonny Quest and Secret Squirrel and a spooky crime caper with Harley Quinn and Poison Ivy. Fisch’s stories are clever and very funny with enough meta jokes to please my inner fan. The art by Brizuela and Scott Jeralds is lively in design and sure-handed in the storytelling. The original cartoons should only have looked and moved this well.

Scooby-Doo! Team-Up is good fun for all ages. There have been two volumes to date and I hope more are coming.

My next convention appearance will be at Indy Pop Con, June 17- 19 at the Indiana Convention Center in Indianapolis. But I’ll be back here next week with more reviews.