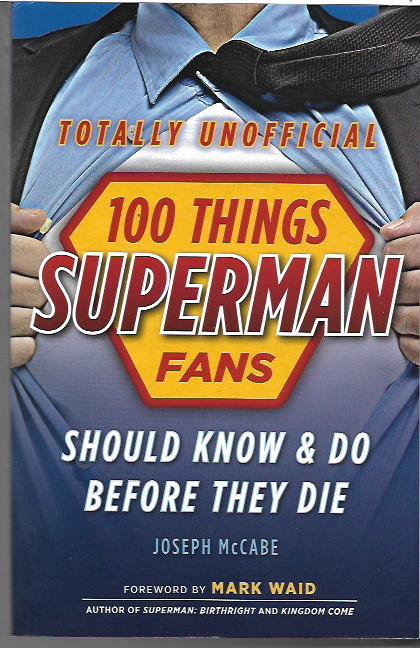 If you’re one of those Superman fans who don’t enjoy the Ayn Rand-infused cinematic tragedies of director Zack Snyder, you may well find Totally Unofficial 100 Things Superman Fans Should Know & Do Before They Die by Joseph McCabe [Triumph Books; $14.95] a welcome relief from Snyder’s inability to grasp the most basic concepts of the super-hero genre. This 300-page-plus softcover takes the reader from Superman creators Jerry Siegel and Joe Shuster to the Batman v Superman: Dawn of Justice movie. Covering over 75 years of super-adventures and behind-the-scenes events would be a challenge even for a man of steel.

McCabe does an excellent job covering that territory. There are a few places where he states his opinions as facts, which is always annoying to a grumpy old fan like me, and one case where he seems to be completely ignorant of an individual’s criminality, but he’s able to leap years and decades of Superman history with a hundred breezy chapters, over two dozen interviews with actors, comic-book creators and movie makers, and countless illustrations and photos. Okay, yes, someone could count them, but that someone wouldn’t be me because I would lose count and have to start over and just would never finish this review.

There’s also one terrific foreword by my pal Mark Waid, one of my favorite comics writer and one of the four or five writers I would hire to write Superman if I was in charge of the character. A fan can dream.

I read 100 Things Superman – What? You expect me to type the entire title again? – over a few weeks. It sat on top of a pile of books I keep on my bedroom night stand. I’d read a dozen pages before I went to sleep and before I would take a nap and sometimes because reading a book I knew I’d review is something I can delude myself into considering not goofing off. Because it wasn’t. I was working. No, really. Stop snickering. I hate you. 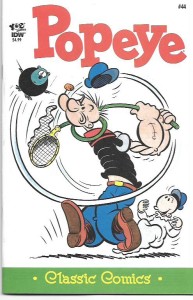 IDW’s Classic Popeye [$4.99 per issue] is one of the true delights of this true Golden Age of Comics. Readers can enjoy wonderful new comics from all over the world as well as classic and not-quite-so-classic comic books from the past. This title earns its adjective issue after issue.

Classic Popeye #44 reprints Popeye #44 [Dell; April-June 1958} with stories and art by Bud Sagendorf. Save for the back cover house ad and two small, bottom-of-the-page house ads, the issue is cover-to-cover entertainment. Two Popeye stories, a short O. G. Wotasnozzle tale, two one-page Popeye gags and a single-page text story. Given that a near-mint condition copy of the original comic could easily sell for a hundred dollars, five bucks seems like a real bargain to Thrifty Tony.

The stories are funny and imaginative. Swee’pea opens a mysterious box and out pops a strange creature called Orbert, which grants the lad’s every wish. Modern readers will laugh and then be ashamed of themselves at a panel in which Popeye grabs Bluto by the collar and demands to know “What’s in the box?”

In the middle story, Wotasnozzle accompanies his annoyed landlord on a fishing trip. As usual, O.G.’s scientific devices are not yet ready for the marketplace.

The second Popeye story has Swee’pea kidnapped by criminals wanting to know where Popeye has buried the vast quantities of pirate gold the one-eyed sailor has found over the years. The so obvious answer had me laughing out loud.

IDW has been reprinting these reprints as Popeye Classics. They’ve published seven hardcover volumes to date with an eighth volume on the schedule for September. These volumes may be difficult to find and even a little pricey, but it’s worth looking for them and also looking for bargains.

Arf…these am some swell comical books. 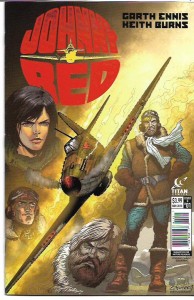 Garth Ennis writes war comics that are the equal of all but a few of our history’s very best war comics – Harvey Kurtzman’s EC Comics titles and Archie Goodwin’s Blazing Combat – and superior to most titles in the genre. Currently, he almost has the genre to himself between War Stories (Avatar) and Johnny Red (Titan), my pick of the week for this week.

Johnny Red first appeared in Battle, the renowned British weekly of the 1970s. Created by writer Tom Tully and artist Joe Colquhoun, the ongoing serial told of a Royal Air Force cadet who received a dishonorable discharge after hitting a superior officer. He ended up joining and becoming the leader of a Russian fighter squadron. That’s not the entire Johnny Red story, but it’s enough for the purposes of this review.

Johnny Red #1 [$3.99] starts with a wealthy collector of warplanes bankrolling the restoration of a Hurricane, a single-seat British fighter plane that could be catapulted from the deck of a ship for what would, unless a pilot could manage to reach a friendly land, almost certainly be its last flight. The restoration craftsmen have done research into the history of this aircraft, which conversation leads us into the dangerous life of our title hero.

In the six issues published to date, Ennis gives us grim-but-real characters fighting and sometimes surviving in the perilous setting of the Second World War. There are brave men and women facing doom on a daily basis. There is courage and an odd fellowship. There are dastardly Germans and corrupt Russians. It’s a hopeless situation, but the sharp writing and the explosive art draw the reader into it and make you feel like you’re facing the same perils.

I can’t say enough good things about the art of Keith Burns. He is a keen storyteller and, when the pages erupt in battle, it’s as if bullets and flaming metal are all around you. I think it’s the most exciting war art since Joe Kubert, Russ Heath and Sam Glanzman were at their best. Were I able to afford original art, I’d bust open my budget to get one of Burns’ magnificent art combat spreads. Wow, this is great stuff.

Johnny Red is one of the best comics being published today. Besides all of the above, each issue also features a historical text piece or two. If you’re more inclined to write for a collection, Johnny Red: Collection 1 [$16.99] is due to be released in October of this year. It’d make a great gift for war buffs and war comic book fans alike. It gets my highest recommendation.