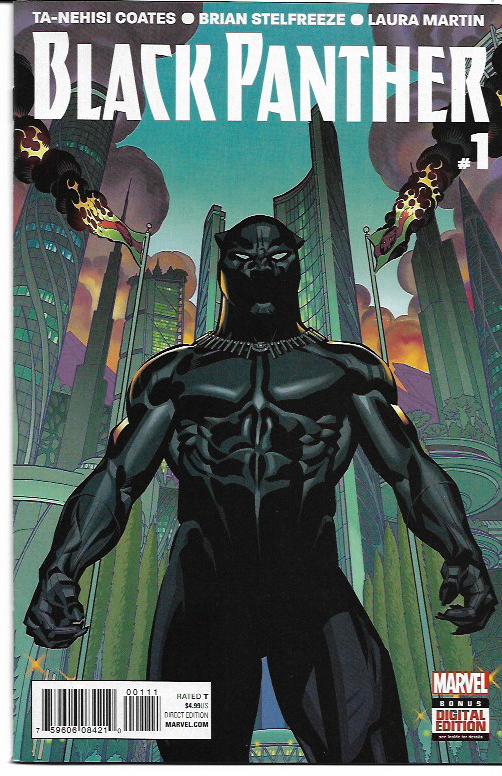 This week is my first-ever “First Issue Special” review column in which I’ll be taking a look at the first issues of three new comic-book titles. Which one will be my pick of the week? I’ll save that for this week’s big finish.

Award-winning author Ta-Nehisi Coates makes his comic-book writing debut in Black Panther #1 [$4.99] and it is a breathtaking journey into the soul of Wakanda. I have expressed my dissatisfaction and even disgust with how the Black Panther and Wakanda have been seen in Marvel comic books. Unconquerable Wakanda has been conquered at least three times in recent years. T’Challa’s innate nobility has been tarnished as inferior comics writers – those who would bring darkness to the most optimistic of comics genres – brought him down to their level. Had I been relaunching the Black Panther, I would have ignored all of that and claimed it all went away when reality was remade in the wake of Secret Wars III. Coates does not do this.

Coates jumps into the rodeo and rides all of these untidy elements. He presents a Wakanda divided, but the divisions come as a likely result of the multiple tragedies. While this initial issues is more than a mite short of the Panther action so brilliantly portrayed in the 1970s stories written by Don McGregor, there are political and spiritual conflicts that intrigue me. I do still want to see of the “people punching other people” that Coates himself lists as one of the key elements of a good super-hero comic book, but this issue is a good start.

The issue’s visuals are as wonderful as the writing. Artist Brian Stelfreeze brings a thoughtful design sense to every aspect of the Wakandan backdrops and costuming, drawing heavily on the “African mentality” of the script and settings. His storytelling is likewise excellent. Color artist Laura Martin enhances the art. This issue is a class act all the way: a terrific story and bonus pages on the development and aspirations of the series. Editorial earns points with a “what has gone before” opening page that sets the stage for this and future issues.

I only buy a handful of Marvel Comics titles. Black Panther is and will remain among them as long as subsequent issues are as terrific as this premiere effort. 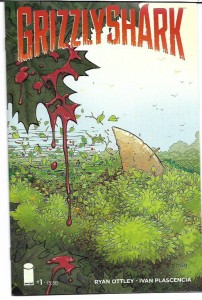 I’m not sure comics creator Ryan Ottley knows who I am or anything about me. However, if he did know anything about me, he would have known it’s not in me to resist buying a comic book called Grizzly Shark [Image; $3.50]. Outside of my wife and kids and a few of my friends, comics are my first love. My second love is cheesy monster movies. I am the guy who will watch Dinoshark and Mega-Shark Versus Giant Porcupine and every other darn movie of that sort. The cheese is strong within me.

Grizzly Shark is about a shark who has somehow ended up in a forest and is now chowing down on anyone who crosses his path. Though we rarely see the entire shark – I suppose Ottley’s budget for special effects was limited – we do see the critter munch on a whole bunch of folks in gory and hilarious ways. Colorist Ivan Plascencia uses a lot of red in this comic book.

This is a goofy comic book. I love it. I will be back for the next issue and as many more issues as Ottley wants to make. It’s like he can see into my very soul. 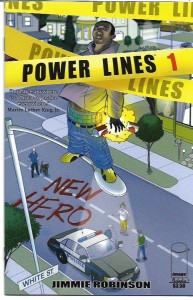 Jimmie Robinson’s Power Lines [Image; $3.99] likewise speaks to me, albeit in a far more serious manner. It’s a tale of ancient power returning to our divisive world and one that doesn’t shy away from the barriers preventing our unity.

When we meet Derrick – his street name is D-Trick – he and his pals are heading to an affluent, mostly white California suburb to tag the buildings there. Their graffiti is their art and they believe creating it in this place will insure their fame. However, Tight, the leader of the crew, is there to smash and grab whatever he can. He shatters a car window and steals the purse inside the vehicle.

Derrick is spotted by the local police before he can tag anything. He runs from them when. They corner him…and that’s when strange things happen. Derrick feels the power around him and he flies away from the cops. He has no idea what just happened.

When we meet Sarah Bellingham, the 48-year-old widow whose car was broken into, she appears to be a stone racist. Yet she’s also been touched by the power, something Derrick recognizes when Saran and her ex-solider son come looking for her stolen phone. Later events bring Derrick and Sarah into contact again and we get to see her in a different light.

This comic has heroes and villains sans costumes. It has mystery. It has great characters. It has surprises and, at the end of issue #2, a truly “gotta see what happens next” cliffhanger. I’m hooked.

Power Lines is a one-man show. Robinson created the series, writes it, draws it, colors it and letters it. I envy his multiple talents and I recommend this series to anyone who likes super-heroes with a different attitude.

My pick of the week was a tough call, but the honor goes to Power Lines. I hope T’Challa and Grizzly Shark will be good sports about my choice.