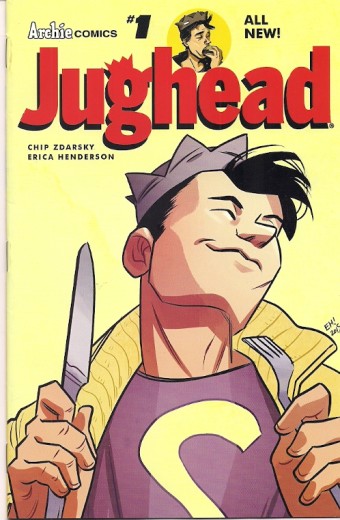 Jughead has long been my favorite of the Riverdale High characters. I especially enjoyed the first volume of his comic book when it was written by Craig Boldman, my third favorite Archie Comics writer of all time. The first two are Frank Doyle and George Gladir, so Craig is in the best of company. I’ll also get back to him in a moment.

Zdarsky’s Jughead isn’t as hilarious as earlier interpretations of Archie’s pal, but it has its moments. These two issues are a battle of wills between Jughead and new principal Stanger. Jughead is the more clever and, despite his cynicism, the more good-hearted of the two. Stanger is bone-nasty and positively eager to do whatever it takes to cement his rule of the school. What’s right and wrong does not figure into Stanger’s philosophy.

So we have an excellent hero versus villain situation, enlivened by wild segues into weird territory. In the first issue, Jughead has a “Game of Thrones” dream that gives him insight into his reality. In the second, he goes on a mission with the Time Police – which I never saw coming – which also gives him insight into how to combat Stanger. It’s something that could get old, but, two issues in, is still fresh and funny.

Digression. I have a dislike of evil principals. As a teen, I had my own battle of this nature, albeit with a basketball coach who was the school’s “dean of discipline” or some such. He could never lay a glove on me and he was fired at the end of my senior year. I count that one as a win for me.

On the other hand, I introduced an evil principal into an issue of my second Black Lightning run, the issue that was rewritten by the scab writer hired by the evil editor who fired me. I don’t believe Pat “the Rat” Garrahy was smart enough to figure it out, but “Ryan Flaherty” was based on him. End of digression.

Henderson’s art and storytelling are both very good. It takes me a beat to adjust to the new looks of the Riverdale characters, but I can manage that in most cases. I am a little bummed over the once-formidable Principal Weatherbee being visually diminished in such a drastic manner. But, overall, I like the art a lot.

Adding to the these first issues, we have commentary by Zdarsky and reprints of very early Jughead stories. Zdarsky seems fixated on Jughead’s Uncle Herman and is considering adding the dangerous mad scientist to the series. I’d be all for that.

One more thing. Craig Boldman’s Jughead run rarely got the acclaim it deserved. I’d love to see a complete reprinting of his Jughead comics. Those stories deserve that.

As for the new Archie series, I haven’t given up on it yet. Once my errant copy of Archie #3 arrives, I’ll read all four issues and see if that changes my initial opinion of the title. 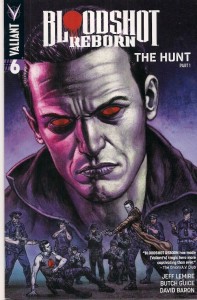 Valiant has been terrific about sending me review copies, so I feel a little guilty I don’t write about their comic books more often. The publisher has created a vast universe in just a few years, so I am sometimes a little intimidated when I read their books. Still, I never feel lost because editorial and writers alike do a spiffy job keeping readers in the loop via inside-front-cover summaries of what has done before and Valiant writers just seamlessly including pertinent information in their scripts. I enjoy Valiant’s comics.

My favorite current title is Bloodshot Reborn [$3.99 per issue] by writer Jeff Lemire, artist Butch Guice and colorist David Baron. I am drawn to Bloodshot, a man injected with nanites and turned into a killing machine by a shady paramilitary organization. Freed from his curse by the mystical geomancer he loved, the man now calling himself Ray Garrison went adrift in his new life. Dire events made it necessary for him to again embrace his former identity.

Bloodshot Reborn is about a good man desperately trying to hold on to his humanity. He again becomes Bloodshot for the most noble of reasons, even knowing that doing so could push his humanity out of his reach. It is said that if you show me a hero, I will show you a tragedy. That may very well be the case here, but I’m definitely in Ray’s corner here.

Lemire’s writing is first-rate. Guice’s art is beyond first-rate. I would love to work with him someday. Baron’s colors enhance the series. This is a great comic book on all fronts.

Happy birthday to me! On my special day – December 22, if you must know – my Sainted Wife Barb and our kids Eddie and Kelly gave me Amazing Fantastic Incredible: A Marvelous Memoir by Stan Lee with Peter David and Colleen Doran [Touchstone; $30]. The 192-page book is Lee’s autobiography in graphic novel form.

Some of these stories you will have heard before. Some will be new to you. Some were even new to me who has known Stan for over four decades. You may question some facts as reported by Stan, who is, after all, one of the greatest storytellers of modern times. Me, I am reasonably confident of the basic accuracy of the book, filtered by my knowledge that we are all the heroes of our own stories. It is true for me, it is true for Stan, it is true for some of Stan’s detractors. Deal with it.

How much of the writing is Stan and how much is Peter’s isn’t all that clear to me. Peter definitely captured Stan’s voice and earns considerable kudos for that.

Colleen? I swear, her art gets better and more surprising with each new project. She captures the cast of this book wonderfully with a breezy storytelling style that just adds to the fun. Her work here deserves an Eisner Award nomination.

If you’re a fan or friend of Stan, you’ll want this book. I got a number of books for my birthday and Christmas. This was the one I read first. Consider that my recommendation.