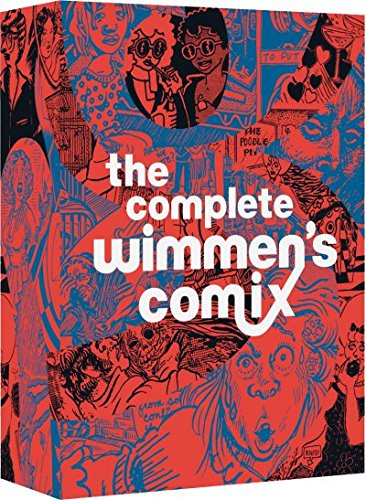 When I select my “pick of the week” each week, it’s generally the comic book, graphic novel, collection or other publication that I enjoyed the most. It’s a little more complicated this time around. I can’t say I enjoyed my choice more than the other things I’ll be writing about in this column, but I do believe this week’s winner is one of the most significant comics collections ever published, and that it’s coming at the right time in comics history.

The Complete Wimmen’s Comix [Fantagraphics; $100] is a two-volume reprinting of the underground/alternative comics anthology that was both part of a movement that changed the way many of us looked at the comics art form and a precursor of the current comics era that may be most notable for its greater inclusion of female writers and artists. When I see how many of my favorite modern comic books and graphic novels are by women, it makes this collection all the more indispensable to comics historians and readers.

I started buying underground comix when I moved out of my parents’ house in the early 1970s. I was working for a local newspaper and lived a short walk from a “head shop” that sold drug paraphernalia, counter culture magazines and underground comix. That I only bought the comix – and I bought them by the fistful – made the shopkeeper nervous at first, but, once he realized I was a comics afficionado, he relaxed. What he never understood was how I could read all kinds of comics from Archie and The Avengers to The Fabulous Furry Freak Brothers and Wimmen’s Comix. 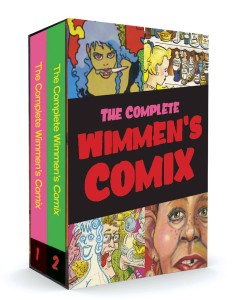 As with the alternative comics works of today, I found underground comics to be a mixed bag. Then as now, I found artsy-fartsy comics pretentious and uninteresting. I still struggle with and despise lettering that makes reading this works more difficult. While I did not and do not mind a bit of naval-gazing from the comics creators who work this side of the comics street – the personal comics are often the best – sometimes it’s as self-indulgent as any “reality” show featuring the Kardashians.

Wimmen’s Comix was and is no different. Born in a era when, season of love and tolerance or not, women cartoonists were not usually respected by their male counterparts, the stories in these volumes are sometimes more anger then craft and more political statements than insights. But, as with the other comics and graphic novels I love, there are so many diamonds in the rough.

These volumes reprint the pivotal It Ain’t Me Babe Comix and all 17 issues of Wimmen’s Comics, over 700 pages of art and story plus an informative introduction by Trina Robbins, long a favorite comics creator of mine and also one of our most groundbreaking historians. Over 100 cartoonists contributed to these comix/comics and it’s as stellar a line-up as there ever was: Alison Bechdel, Joyce Farmer, Shary Flenniken, Phoebe Gloeckner, Roberta Gregory, Joan Hilty, Carol Lay, Lee Marrs, Cynthia Martin, Barb Rausch, Dori Seda, Mark Skrenes, Carol Tyler and so many more.

If I had to pick a favorite issue, it might be Wimmen’s Comix #6, which was a “bicentennial” issue with entertaining looks at history and herstory. But that favorite pick would probably change the next time I flipped through these volumes. Though the reading gets tough at times, the great stuff in these books makes the effort totally worthwhile. If you want to know how we got here, you have to look back at where we were. That’s why I believe The Complete Wimmen’s Comix is an indispensable part of your comics library. 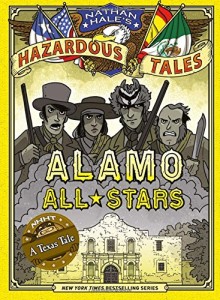 Nathan Hale’s Hazardous Tales: Alamo All-Stars [Abrams; $12.95] is the sixth book in the wonderful series of graphic novel histories from the New York Times bestselling and award-winning author. Hale is a master of presenting the facts, grim as they often are, in an entertaining and even humorous fashion. The books are suitable for readers as young as eight, but can be enjoyed by adults as well, be they comics fans or history buffs.

The starting point of the books in this series is Nathan Hale, the hero of the American Revolution, facing his death by hanging. But, taking his cue from Scheherazade, the legendary storyteller of One Thousand and One Nights, Hale delays his demise by telling tales of American history to his executioners, including events taking place long after his death. After the initial jolt, this seems perfectly reasonable. Then again, I believe a man can fly.

In this book’s 120 meticulously-researched pages, Hale covers the events leading up to the battle of the Alamo and the key players in those events. It’s the story of Texas, the story of bad things done by men whose history we cleansed to fit modern myths – for example, Jim Bowie was a smuggler dealing in illegal slaves – and the story of how much we lose when we take shortcuts with history. Forgotten is the Goliad Massacre in which 350 men were slaughtered by Santa Ana’s army.

Alamo All-Stars is dense in facts and observations, presenting them in a downright breezy manner. The entire Hazardous Tales series is, to my mind, a must-have for school and public libraries. Nor would these books be out of place in the personal library of comics fans who embrace true variety in their collections. 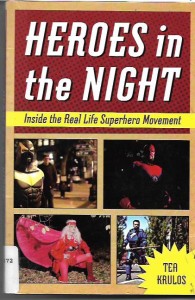 It came out in 2013, but I only recently discovered and read Heroes in the Night: Inside the Real Life Superhero Movement by Tea Krulos [Chicago Review Press; $16.95]. From time to time, you’ve probably seen TV news reports on the seemingly random citizens who don their homemade, sometimes very sophisticate costumes to fight crime and help their fellow citizens. As Krulos reveals, while the former is not always successful or wise, the latter can have benefits to the communities in which these heroes operated.

Krulos takes his costumed subjects seriously. He doesn’t hold back when examining when heroes are out of their depth of acting in the name of personal glory. But he also applauds their good deeds and their overwhelmingly good hearts. If you don’t tear up a little on reading the segment of the book on Power Boy, a nine-year-old kid facing an incurable disease and the story of his virtual adoption by real-life super-heroes from across the country, then you don’t get super-heroes and super-hero fiction at all. On the flip side, if you’re at all sane, you must be at least a bit concerned about the number of these real-life costumed heroes who cite Rorschach as their inspiration. Shudder.

Heroes in the Night is a fascinating book. I wouldn’t recommend you use it as a super-hero handbook, but it may inspire you to question what you can do to be a hero in your everyday life.