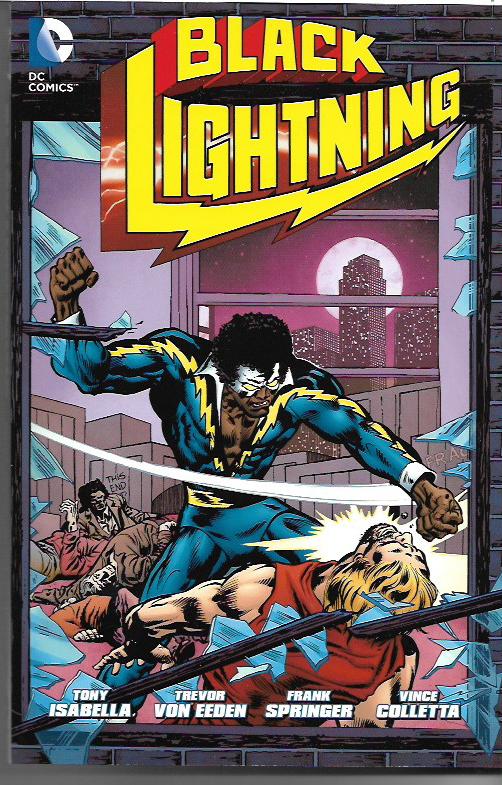 I have no shame.

My pick of the week is Black Lightning [DC Comics; $19.99], which collects the stories from Black Lightning #1-11, Cancelled Comics Cavalcade #1 and World’s Finest Comics #260. These stories, mostly written by yours truly with two by the legendary Dennis O’Neil and mostly drawn by original series artist Trevor Von Eeden, have never been reprinted since their original appearances from 1977 to 1979. Okay, if you want to quibble, Black sLightning #1 was reprinted at reduced size in a DC digest magazine during that period, but that’s it. Unless you read these stories in their original publications, they will be new to you today.

When I created Black Lightning, it was the not-quite-culmination of a personal quest to create an inspirational African-American super-hero who readers black and white, young and old, could relate to. My quest was born of my longing for simple fairness, long before I heard and embraced the term “diversity.” I had black friends who read comic books and they didn’t often see themselves in the comic books they read. I thought that was wrong. So when I got into the comics industry in 1972, I wanted to do something about it.

I got my training at Marvel Comics under the tutelage of Stan Lee and Roy Thomas. I was privileged to be part of an amazing bunch of writers which included Gerry Conway, Steve Englehart, Steve Gerber, Don McGregor, Len Wein and Marv Wolfman. When I moved to DC and new challenges, fate and two questionable scripts by another writer gave me a rare opportunity to make comics history. But you can read all about that in this collection’s new introduction.

In these stories, you will meet Jefferson Pierce, a man who, after some disappointments in his life, returns to the high school where he first earned renown as an athlete and embraces his studies as a teacher. He came looking for a new start, to encourage students as he had been encouraged young minds and, perhaps, to reconnect with the sense of community that has always been so vital to our black communities and our nation. What he didn’t expect to happen was to become a reluctant soldier in a war. With the fourth issue of the original series, each story began the same way:

Jefferson Pierce: a man who came home and found that home in the merciless grip of the 100. Now he fights the mob on two fronts, in the classroom as a dedicated teacher and in the streets as the dynamic…Black Lightning!

In these stories, you will see Black Lightning accept the mantle of super-hero while contending with ruthless mob-boss Tobias Whale and minions such as the Cyclotronic Man and Syonide. You will see him meet such classic DC characters as Inspector Henderson, Jimmy Olsen and Superman. You will see the earliest work of future super-star artist Trevor Von Eeden.

When a writer reads stories he wrote four decades ago, he’s putting his ego at risk. Long-forgotten flaws in the work leap out at you. But, at the risk of sounding immodest, I think these stories hold up pretty well. There are moments that make me proud, such as when Black Lightning explains to Superman why he can do what Superman cannot do or when Jeff Pierce makes peace with his past. There are thrilling action sequences, tragic losses and joyous victories to be had. I’m proud of this work and I hope you’ll find enjoyment and merit in it as well.

Jeff Pierce’s “mantra,” as it were, was his version of an old poem:

Justice, like lightning,
Should ever appear,
To some men hope
And to other men fear.

Thanks to Den Didio, Geoff Johns, Paul Santos and other DC folks, the hopes I had for this creation live on. Their respect for Black Lightning and my work is genuine and welcome. These old tales could represent a new beginning for Jefferson Pierce and what he stands for. I invite you to join the dream. 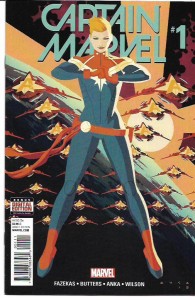 Welcome to the new comics industry. Sisters are continuing to do it for themselves and I’m extremely glad for it. As regular readers of this column know, many of my favorite super-hero and other comics star female characters and are often written and drawn by talented creators who happen to be women.

Danvers) commands the Alpha Flight space station, an early warning and defense station protecting our planet from alien encounters of the unfriendly kind. That the first issue of the new series was also the first comic-book script for the duo boggles my mind. It’s the equivalent of hitting a home run in your first at-bat as a professional. Maybe not a perfect out of the park homer, but a home run just the same.

Carol is everything a super-hero should be. Human and super-human. We can relate to her frustration at the bureaucracy involved in her new job while admiring her leadership chops. The use of the Alpha Flight characters is a little problematic for me – Puck asking for Carol’s autograph, the seemingly unnecessary mention that Sasquatch and Aurora were once romantically involved – but I’m intrigued by other supporting cast members as well as the mini-Babylon 5 vibe of the station’s dealings with various extraterrestrials. Two issues in and I’m hooked.

Captain Marvel looks and reads well with solid art by Kris Anka and colors by Matthew Wilson. If you’ve enjoyed other super-hero titles I’ve recommended, you’ll enjoy this one, too. 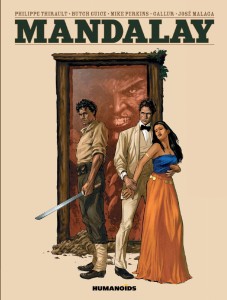 Mandalay by Philippe Thirault with art by Butch Guice, Mike Perkins and others [Humanoids; $39.95] is a dark and exciting adventure set in colonial Burma in the 1940s. It’s the tale of twin brothers who find themselves on opposite sides of conflicts between the Burmese and their British occupiers, between the British and the invading Japanese and between their passions for the same woman, with all of these situations inflamed by dark powers released from an ancient, cursed city. Published in a glorious, hardcover, oversized edition, Mandalay is 188 pages of excitement, horror, romance and tragedy. Once I started reading the graphic novel, I couldn’t turn its pages fast enough…and then I went back to savor them again.

Mandalay almost slipped under my radar, but a brief online mention led me to it. The story is compelling with an ending that is both satisfying and wonderfully unnerving. The Guide/Perkins are is top-notch, as are the forty or so pages drawn by other skilled artists. It’s the kind of book that makes me want to seek out other comics work from Europe. Read it and see for yourself.