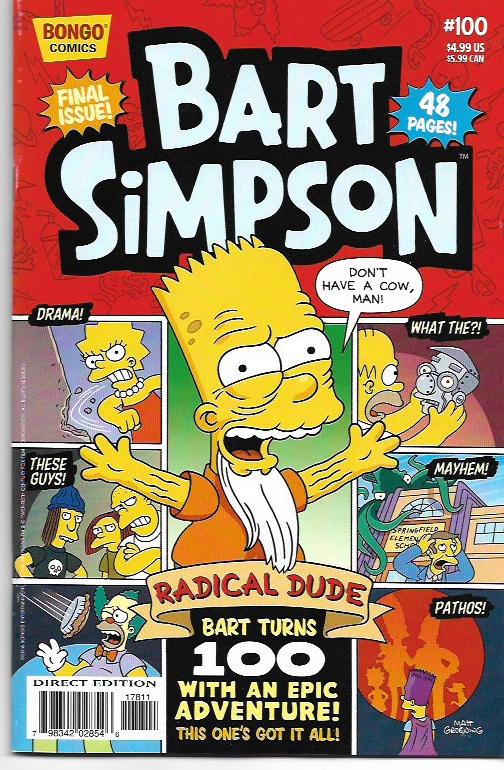 Welcome to another column of reviews, views and even a plug for my latest comics effort. We’ll start with my pick of the week…

Awarding “pick of the week” to Bart Simpson #100 [Bongo; $4.99] may seem like rewarding bad behavior, but I’ve enjoyed the kid’s comics and TV adventures for too long not to honor the final issue of his series. For the grand finale, Nathan Kane (story and edits) and Ian Boothby (script) have pulled out all the stops for a 44-page time-traveling, reality-altering epic. Kane and Boothby are accompanied by excellent artists Nina Matsumoto (pencils), Andrew Pepoy (inks) and Art Villanueva (colors). It’s a great looking comic book.

This extra-long story has a twist around every turn of the pages. There are lots of laughs and wild action scenes. There is even an heartwarming moment when Bart encounters Mrs. Krabappel in Heaven. I got a little misty over those pages. They cemented my view that this issue deserves a nomination in next year’s comic-book awards.

Bongo Comics itself deserves ongoing praise for its publications. They feature entertaining done-in-one stories (and sometimes more than one done-in-one story) that don’t rely on continuity beyond a passing familiarity with the Simpsons TV series. I’m not even sure you need even a passing familiarity to enjoy Bongo’s wonderfully-written, well-drawn and impeccably produced comics. Their various titles have been on my buying list for years, outlasting a number of favorites from other publishers. If there were a Tony Isabella Seal of Approval, Bongo would get it. 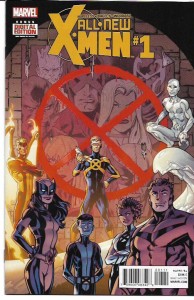 All-New X-Men [Marvel; $3.99 per issue] stars four of the original five X-Men, brought from the past to the present because modern-day Hank McCoy went mad scientist with time travel. His intentions were good. Cyclops and the current X-Men had gone off the rails in a big way and Hank thought seeing their younger selves would remind them of a time when they weren’t megalomaniacal jerks. It didn’t work, but the old kids back on the block were interesting as they looked with horror on what their future selves had done. Also, the young Jean Grey outed the young Iceman as gay, which came as a shock to the adult Iceman. Good times.

In the post-Secret Wars version of the title, Jean Gray is starring in an X-Men title that’s not as good as this one. Angel, who has a glowing set of wings for some reason, is romancing the all-new and female Wolverine. Other members include Kid Apocalypse, a bamf name of Pickles and Idie Okonkwo, a mutant with the power of temperature manipulation. It’s a good group and I especially like how the young Cyclops is trying to hide from and then live with the sad fact that his adult self was a megalomaniacal jerk to end all megalomaniacal jerks. While young Scott Summers has inspirational and leadership chops, he’s afraid to make the most of them.

Written by Dennis Hopeless, the first three issues featured Scott and the others crossing paths with a gang of young Chicago mutants who called themselves the Ghosts of Cyclops. Kids do the stupidest things. It was a solid story with excellent art by penciler Mark Bagley, inker Andrew Hennessy and colorist Nolan Woodward. I liked it these issues, though I somewhat alarmed that the fourth issue is a lead-in to Apocalypse Wars, “the next big X-Men event.” Because, Bullwinkle, that trick never works.

If All-New X-Men is still good after “the next big X-Men event,” I will keep reading and recommending it. 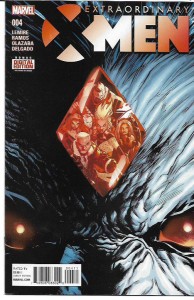 Extraordinary X-Men [Marvel; $3.99] is the X-Men title that’s not as good as the one I just reviewed and, in truth, it’s a title that seems designed to make me not like it. The roster includes Storm, who I don’t know anymore; Iceman, whose struggles with realizing he is gay get a little creepy when he asks a much younger gay mutant for advice; Magik, who has always been unlikeable; Colossus, who is way too enabling of his kid sister; Cerebra, some sort of Sentinel, but a good one; Nightcrawler, who is currently suffering through a nervous breakdown; Jean Grey, who shouldn’t be in this book; and an alternate universe version of Wolverine, a character who is still overused in any universe. They have been fighting the uninteresting Mister Sinister and a clone of the dead older Cyclops. Oh, yeah, and this team and the mutants they shelter are all living in a sanctuary in Limbo. Where’s House Hunters International when you need it?

That’s my come away from all this: bad choices, twisted characters, very clumsy handling of Iceman’s life-changing revelation and the disappointment the whole “mutants are deathly allergic to Terrigen mist isn’t making for much better, more emotional and more gripping stories. I would give this one a pass. 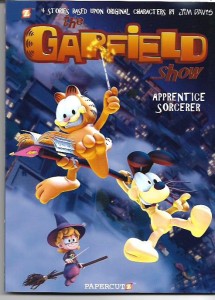 You’ll have to look real hard to find my credit in my latest comics work. I did the “dialogue restoration” for The Garfield Show #6: Apprentice Sorcerer [Papercutz; hardcover $12.99, paperback $7.99]. The short version of what I do is:

I take the French comics albums adaptations of the popular Garfield TV show and try to restore as much of the original English scripts as the art and space allows. I write some new dialogue here and there as necessary or sometimes because I’m just having so much fun working on these stories.

It’s a great gig for me. Mark Evanier, who produces and does most of the writing for the show, is one of my dearest, oldest friends. Tom Orzechowski, a pal from my pre-Marvel days in comics fandom and another old/dear friend, got his first professional gigs from me. Papercutz editor-in-chief Jim Salicrup is another old/dear friend. Jim has hired me to write for him at three different publishers. In short, I’m having great fun working with three great pals. Buy this book and get it on the fun.