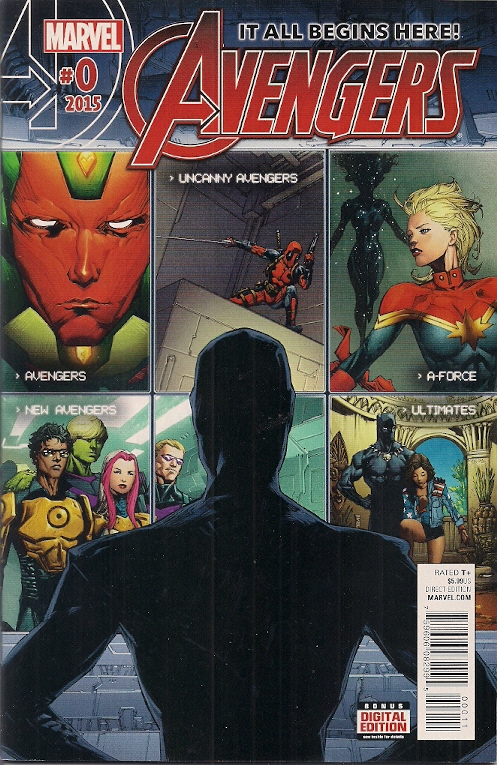 The Avengers is Marvel’s signature franchise these days with only the Amazing Spider-Man and his growing Spider-Family titles coming close to the plethora of core and sold Avengers titles. Avengers #0 [$5.99] is an introduction to the six core Avengers books: All-New All Different Avengers, New Avengers, Uncanny Avengers, Squadron Supreme, A-Force and Ultimates.

As a sampler, Avengers #0 is a mix of stuff that interests me and stuff that doesn’t. At first blush, the Squadron Supreme bridging sequence appears to be following in the footsteps of the brilliant Mark Gruenwald series from the 1980s, albeit, in keeping with our own sad decade, walking a far more brutal path. This one will be a tough sell for me, even with a creative team of James Robinson and Leonard Kirk.

From the All-New All-Different Avengers, we have a honestly moving story featuring the Vision and the Scarlet Witch by Mark Waid and Mahmud Asara. It doesn’t give much of a hint as to what the All-New team series will be like, but that’s okay since I’ll be reviewing the first two issues of it later in this column.

The Deadpool vignette by Gerry Duggan and Ryan Stegman is a sort of prologue to Uncanny Avengers. Steve Rogers has recruited Deadpool to be a member of his unity squad. I’ve never been a Deadpool fan, but this fragment worked for me. Deadpool has great respect for the first Captain America and Rogers sees something good in the wise-cracking mercenary.

The New Avengers segment by Al Ewing and Gerardo Sandoval didn’t do much for me. I like the idea of Sunspot buying A.I.M. and making it a force for good. I like most of the heroes. The deal breaker: the main villain is an evil Reed Richards from a destroyed universe and
I’ve had quite enough of heroes behaving badly. I don’t understand Marvel’s fascination with tarnishing legendary heroes, but I know I find it tiresome.

Captain Marvel and her A-Force is our first line of defense against invaders from other worlds and other dimensions. I’m on the fence here. I loved the previous Captain Marvel series. I’m a big fan of writer G. Willow Wilson. What will sell me on this title is whether of not Carol Danvers has a supporting cast as good and as real as she had in her previous title.

The Ultimates? Unfortunately, the segment by Al Ewing and Kenneth Rocafort was too brief and too trippy for me to get a sense of the title. I’ll need to see more.

Avengers #0 is a good, but not great sampler of the Avengers post Secret Wars. I recommend it for the Vision and Deadpool vignettes. 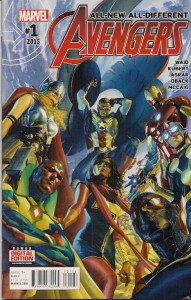 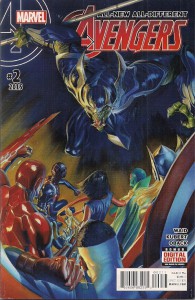 All-New All Different Avengers #1 [$4.99] and #2 [$3.99] introduce the roster for this Avengers team: Iron Man, Captain America, Thor,
Nova, Ms. Marvel, the Vision and Miles Morales. There doesn’t seem to be a “The Avengers” team yet, but this line-up makes a case for its earning that “The.”

Written by Mark Waid, the heroes are all interesting in different ways. Ms. Marvel is impressively mature and more cognizant of the people and buildings around her than the reckless Nova. As Captain America, Sam Wilson is dealing with the politics of being the black guy wearing that uniform. Tony Stark is very close to the Tony of the Marvel movies and that works for me. The Vision is very much a “taking care of business” hero while Miles seems overwhelmed by his new world. I know and like Thor for her own title, but, as she does not make her first appearance until near the end of Avengers #2, I can’t judge how well she works in this team.

In another echo of the Marvel movies, the most visible opponent for the new team is a Chitauri warlord name of Warbringer who Nova once threw into a sun. In a fresher twist, there’s also something very
unnerving about Mr. Gryphon, the guy who bought Avengers Tower from a cash-poor Stark. For starters, he speaks fluent Chitauri. There’s more, but I’ll leave you to learn it for yourself.

When it comes to super-heroes, I generally prefer the more down-to-earth kind of adventures. But I like that the Avengers handle the bigger stuff. The original Kree-Skrull War and such. The Avengers movies, both of which I enjoyed, showed us how to do big whopping menace without losing the human element. That should be the goal of
this title and it’s gotten off to a good start.

Though I’m a story-first-and-foremost reader, I would be remiss if I failed to give artist Adam Kubert his props. He is wonderful at portraying both the big stuff and the human stuff. I hope that he and Waid have a long run on this series.

One more thing. Could Marvel please make an Avengers organizational chart and share it with us? I’m already having trouble figuring out
what’s what and who’s who with all these different teams claiming the Avengers name. Give an old guy a leg up, will ya?