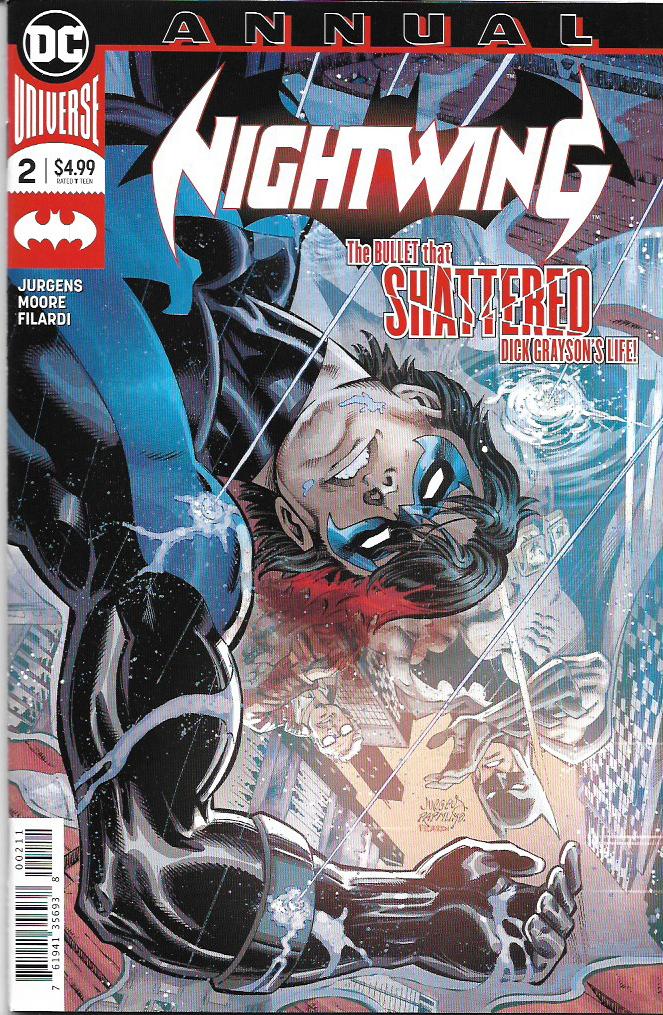 The comic-book world is abuzz with the news DC Comics is now down to one publisher, with the online worlds of praise and condemnation for the departed Dan DiDio and with all manner of speculations as to what this means for the DC Universe. I have refused a number of requests that I take part in this discussion for the simple reason I find it distasteful. A man who was clearly passionate about comic books has lost his job. I find that sad and wish him well in what future endeavors he may pursue.

Instead, let’s talk about Nightwing. I tend to read ongoing series in big whopping chunks. I wasn’t keeping count of how many issues I read, but I think it was around forty. What struck me most about these issues was, that while some offered good writing and art, the stories revolved around making Dick Grayson not Dick Grayson. Which struck me as odd because, if you understand the core values of this character, you would embrace them.

In the most recent issues I read, he had lost his memory and was calling himself Richard Grayson. It didn’t even happen in his own book. It happened in Batman. Talk about an insecure actor hogging the stage. Batman needs a therapist.

Grayson’s origin has been retconned to make him the heir apparent assassin of the terminally boring Court of Owls. The secret group Batman – who knows everything – somehow didn’t know about. I never could get past that illogical contrivance.

Dick Grayson can be a fascinating character. He comes from the same terrible loss of his parents that shaped Batman. He’s taken in by Batman and, at least before DC decided Batman was psychotic, given a childhood and a life brighter than any Batman has known. Then, as young men will do when they reach adulthood, Grayson went his own way. He tries to honor Batman without becoming Batman. I bemoan the corporate lack of imagination that doesn’t realize how many years, nay, decades worth of stories that can come from this character’s core values. It’s sad.

However, if Nightwing doesn’t fill me with joy, there are plenty of other comics that do. Here are this week’s reviews… 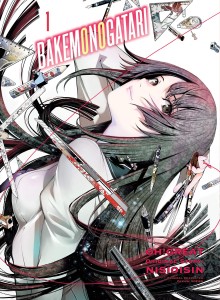 All three of today’s entries are comics I got from my local library system after I read excerpts from or read about them in last year’s Free Comic Book Day and Halloween ComicFest giveaways.

Bakemonogatari volumes 1 and 2 [Vertical Comics; $12.99 each] star high school student Koyomi Araragi. Once turned into a vampire and then cured, he retains some of his vampiric powers: superhuman healing and enhanced vision. Now he tries to help others who suffer from supernatural maladies.

Drawn by the humble Oh!Great from the original story by Nisioisin, Bakemonogatari isn’t always the easiest to follow, but is worth the effort. Araragi is a relatable hero. Senjogahara, a beautiful and sometimes unpleasant high school student, is the first person that he helps. Then she joins him to help another supernatural victim. She claims she’s just repaying her debt to him, but, if I were the sort to “ship” comics characters, I’d definitely ship these kids.

I liked these first volumes of Bakemonogatari well enough that I’m looking forward to the third, which should be available in March. If you’re into manga, I think you’ll enjoy this series. 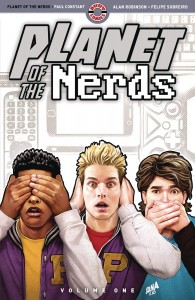 Planet of the Nerds [Ahoy Comics; $17.99] has already been optioned for a live-action movie by Paramount. Written by Paul Constant with art by Alan Robinson, it’s a sci-fi comics about 1980s high school jocks and the genius nerd they torment. Alvin (the nerd) is working on a device to cryogenically freeze living creatures to be revived in the future. When the jocks break into his secret laboratory, the three of them get fast-frozen with Alvin escaping. The laboratory remains hidden until 2019. It’s uncovered by a construction crew and the jocks are revived. Suddenly finding themselves in a world they don’t understand, the jocks have a rough go of it in a society where nerds rule. They have no plan…until they realize Alvin is alive, rich and powerful.

Constant does a great job with the personalities of the jocks, an old girlfriend of one of them and, of course, Alvin. Robinson’s art and storytelling is first-rate. There are many surprises along the way, only some of which I saw coming. Most importantly, this done-in-one trade collection delivers a satisfying ending. I had a ball reading it, but, in an industry that often fails to realize when a story has reached its natural conclusion, I like the closure that comes with the ending. 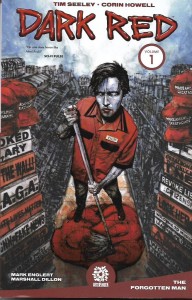 Dark Red by Tim Seeley and Corin Howell [Aftershock Comics; $14.99] is my pick of the week. Protagonist Chip is a “forgotten man.” He was turned into a vampire during World War II, but has staked his claim to a small town he feels is more decent than the big cities with their secret vampire kingdoms.

Chip does not feed on his neighbors. He works a lousy third-shift job at a gas station. He gets his nightly sustenance from a young woman whose body produces too much blood, a condition that will be fatal in time. It’s a peaceful existence until other vampires come to town. Chip has a long-standing problem with these vampires and not merely because they want his turf.

What puts this series a cut above most vampire comics is Seeley’s strong characters and Howell’s ability to make those characters distinctive and interesting. The story is a page-turner with lots of eye-opening scenes and surprises. The ending is satisfying, even though there is clearly more to come.

Dark Red isn’t Tomb of Dracula or Dracula Lives, but I can’t think of a vampire comic books I’ve enjoyed more since those two classics of the form. This gets my highest recommendation.