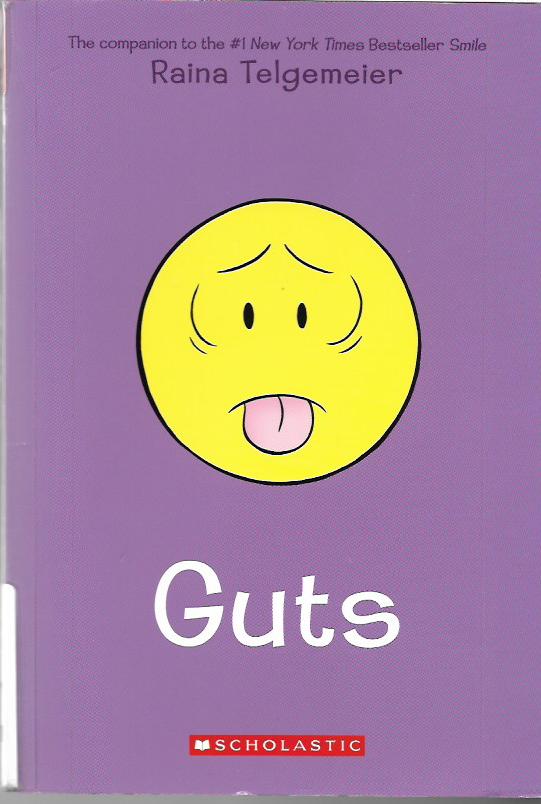 Whew! My 2019 convention season is over. My final appearances were at the Akron Comicon in Ohio, followed a weekend later by the Grand Rapids Comic Con in Michigan. Both were fantastic events, but I’m looking forward to spending the next three months at home.

There are a dozen books I want to write. I’ve set myself the lofty goal of finishing three of them before my first appearance of 2020. Can the market support that many Isabella books at once? I hope we get the chance to find out.

At both of those conventions, I had fans tell me my review columns here and elsewhere introduced them to some of their favorite comics and graphic novels. I never tire of hearing that. If these columns have a mission, it’s just that. Bringing comics readers to amazing comics they may not have heard of before I reviewed them. Let’s see if any of this week’s three subjects fit that bill…

For a week in late October, and perhaps longer as I don’t check the lists frequently, Raina Telgemeier’s Guts [Graphix; $12.99] was the bestselling book in America. I’m not talking just the bestselling graphic novel. I’m talking bestselling period, even topping Stephen King’s The Institute. When I checked the book’s Amazon listing, I learned it was currently ranked #1 in Children’s Biography Comics, Anxiety Disorders Books and Children’s Difficult Discussions Books. All of these honors are well-deserved.

In Guts, the New York Times bestselling author and multiple Eisner Award-winning creator, Telgemeier tells the true story of her bout with an anxiety-triggered stomach disorder. From the back cover of this softcover book:

Raina wakes up one night with a terrible upset stomach. Her mom has one, too, so it’s probably just a bug. Raina eventually returns to school, where she’s dealing with the usual highs and lows: friends, not-friends, and classmates who think the school year is just one long gross-out session. It soon becomes clear that Raina’s tummy trouble isn’t going away… and it coincides with her worries about food, school, and changing friendships. What’s going on?

Having suffered similar disorders in my life, Guts was difficult to read at times. Telgemeier relates her story with courage, humanity and humor. It’s aimed at readers eight to twelve years old, but I wouldn’t hesitate to hand it to a younger child and would darn near force it upon an older reader. Especially a delusional older reader who thinks comics are dead or dying. Comics are so much bigger than superhero crossover sagas and dark interpretations of superheroes twisted because comics publishers lack imagination.

I’m not going to proclaim Telgemeier is the future of comics, but I’ll put forth the undeniable truth that she is definitely a future of comics. Quality and sales are the proof of that.

Consider Guts and all other Telgemeier original graphic novels as highly recommend by this comics veteran. You’re in for a whole lot of great reading. 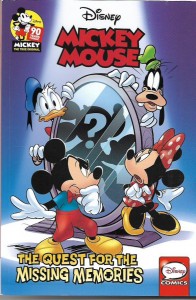 I was not a Mickey Mouse fan in my youth. I liked the serials that ran in Walt Disney’s Comics and Stories okay, but it was hard for me to find every chapter of them. I also found them tame compared to the other comics I was reading. Then, as an adult, I discovered Mickey comic stories from overseas. These were more action-packed than what I’d read previously. I related to this feisty adventurer, short in stature but big on bravery. I particularly liked the great Italian creators who worked on these stores.

Mickey Mouse: The Quest for the Missing Memories [IDW; $14.99] is a particular treasure. Written by Francesco Artibani, this eight-part saga starts with Mickey defeating the Phantom Bolt at the cost of his memories. With chapters drawn by eight top Disney artists, he tries to live his life while reconnecting to character traits he can’t actually access emotionally.

One by one, teaming with a amazing cast of friends and heroes, our Mickey does recover all the missing pieces of his personality. It is an exciting thriller filled with friendship, heart and dangerous villains. This is my Mickey. More please.

Mickey Mouse: The Quest for the Missing Memories is suitable for readers of all ages. I know Mickey might not be first and foremost among kid favorites today, but I think this trade paperback would make a splendid gift for a youngster in your life. As well as for older friends and family members who would love to catch up with an old friend. 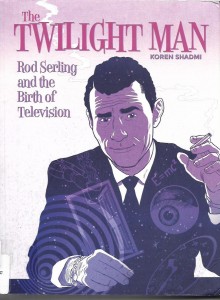 The Twilight Man: Rod Serling and the Birth of Television [Life Drawn; $22.95] is a comics biography of the man who revolutionized television and became a beloved guide to millions of “tourists” as they journeyed into the realms of the fantastic and the future and the supernatural. The sign post he showed us directed us to some of the best acting and writing ever broadcast on television.

Writer/artist Koren Shadmi uses a storytelling style that fans of The Twilight Zone will recognize to show us the life of a man who was driven to expand television as he knew it. From his time in the military to the end of his life, Sterling experienced triumphs and losses. In short order, Shadmi brings him to vibrant life, making at least this reader wish he’d met Sterling and spend an afternoon with him. I know I would have come away smarter from the encounter.

Sterling lived his life with intensity. Shadmi allows us to share that life, albeit from a distance. If you’re a fan of The Twilight Zone, this book definitely belongs in your home library. Me? I just took a mid-paragraph break to order the complete series on DVD. I can’t wait to see and follow those signposts.