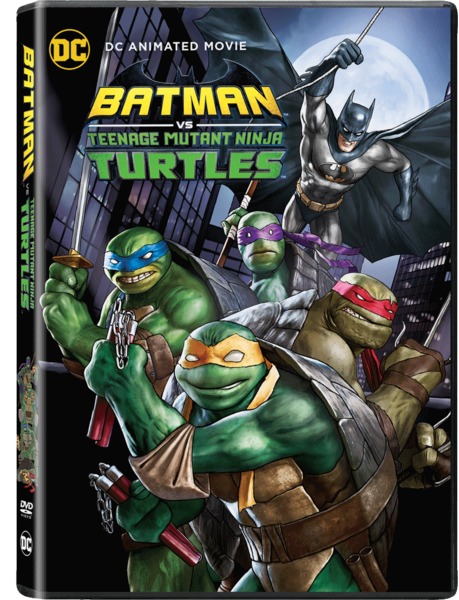 Saintly Wife Barb and my wedding anniversary hit on the same day as Father’s Day this year. I took Barb to dinner on the night before. Our kids Eddie and Kelly came over to our house on the actual day. The day could have gone better.

We ate at a pretty nice restaurant in our home town of Medina. The food was good and the service was slow. I was going to describe it as “glacially slow,” but, in these sad days of climate change, that isn’t as slow as it once was. Because of the slow service, we were unable to hit a primo donut and pastry shop just a few doors down from the restaurant before said shop closed.

We decided to go for ice cream at a once-beloved ice cream stand in the area. Another fail as the stand has gone downhill since we were last there. Fortunately, our evening’s entertainment turned out to be fun if somewhat disturbing. We watched Batman vs Teenage Mutant Ninja Turtles (2019). It’s “Rated PG-13 for fantasy violence” and you need to take that rating seriously if you’re planning to watch it with younger children.

Batman, Batgirl and Robin forge an alliance with The Teenage Mutant Ninja Turtles to fight against the Turtles’ sworn enemy, Shredder, who has teamed up with Ra’s Al Ghul and The League Of Assassins.

I want to reiterate this is a very violent feature. Decapitation, dismemberment and a very graphic scene in which one of the Turtles gets his arm broken. I don’t like giving you a spoiler like that, but I need to stress this film is not for younger viewers.

The movie is written by Marly Halpern-Graser, based on the comic by James Tynion IV and Freddie Williams II. The story is a solid one with a number of gripping moments. The “versus” part of the title is well-played. Stubborn heroes with little knowledge of each other and their own ways of dealing with situations. I enjoyed how both sides learned to work with one another and to respect one another. That was one of the most satisfying parts of the film.

Directed by Jake Castorena, the movie has terrific voice work and animation. Troy Baker is excellent as both Batman and the Joker. I’m not as familiar with the actors who voiced the Turtles, but I felt their performances worked well. It was a treat to hear Rachel Bloom as Batgirl, John DiMaggio as Mr. Freeze, Brian George as the ever-faithful and sarcastic Alfred, Tom Kenny as the Penguin and Tara Strong as Harley Quinn and Poison Ivy.

After getting over my shock at the violence level in the movie, I did enjoy it. However, I was disappointed that neither April O’Neil or Splinter appeared in the film.

Batman vs Teenage Mutant Ninja Turtles was worth the $4.99 rental fee (Amazon Prime) and the 87 minutes I spent watching it. I don’t expect I’ll watch it again, but I do recommend it to fans of Batman and the Turtles.

Some of my creative contemporaries made their professional debuts in the Charlton comic books of the 1960s and 1970s. Others, myself included, simply enjoyed those quirky efforts with lousy printing and the lowest rates in the industry. Of late, some of those pros have launched Charlton Neo Media.

Neo Media’s initial offerings were original anthologies created in the spirit of Charlton and sometimes featuring Charlton characters considered to be in the public domain. Those comics might not have been classics, but they were fun. I’m okay with fun.

Of late, Neo Media has been publishing a series of “Charlton Comics  Silver Age Classic Cover Gallery” books. Courtesy of Rob Jones, an assistant to the legendary editor and artist Dick Giordano, these gallery editions feature vintage covers shot from the actual stats used to print those covers. Printed in black-and-white, the covers look better than in their original publication. Which doesn’t mean I wouldn’t love to see them re-colored.

I ordered Nurses Monsters and Hotrodders [$7.99] on a whim. In its 64 pages (counting covers and the inexplicably blank pages at the end of the book), the square-bound comic book had an introduction, information on the various titles, 31 covers and a list of how to read these comics and more online for free. The covers shown are from such titles as Blue Beetle, Cynthia Doyle Nurse in Love, Drag-Strip Hotrodders, Doctor Tom Brent Young Intern, Gorgo, Hot Rods and Racing Cars, Konga, Konga’s Revenge, Nurse Betsy Crane, Three Nurses and The Young Doctors. Besides Giordano, the cover artists are Bill Fraccio, Vince Colletta, Pat Masulli, Jack Keller, Steve Ditko and Charles Nicholas.

I got a kick out of this cover gallery collection. Indeed, I have bought three more since: Teen-Age Love Confessions, Outlaws of the West and Strange Space Mysteries. I’m planning to buy any others I come across as well. These books won’t be for every one, but they will delight Charlton fans and comics historians. I recommend them to anyone who fits into either of those groups. 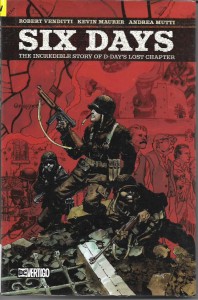 DC Comics made its bones in the general book markets with Vertigo volumes. To ditch that strong brand for DC Black Label, a moniker better suited to lousy beer, is one of those nonsensical decisions corporations make from time to time. I didn’t love everything that was published under the Vertigo brand, but so much great material was published that comics fans and historians will be talking about Vertigo for as long as there are comics and graphic novels. If they remember Black Label at all, it will probably be that the brand’s signature move was to show Batman’s privates in an execrable mini-series.

The recently-released Six Days: The Incredible Story of D-Day’s Lost Chapter [$24.99] proves there was still creative life in the Vertigo brand. Written by Robert Venditti and Kevin Maurer with art by Andrea Mutti, this hardcover graphic novel tells the remarkable story of American soldiers dropped too far into enemy territory on D-Day and how they were joined by the people of a French village in holding back the advance of the German army.

Six Days is history, grim and heroic. The cast of characters is a large one, but we get to know many of them. When one of them falls, it’s a pain we readers can share with the characters. I was moved by this gripping story. It’s my pick of the week and I recommend it to comics readers in general and war comics readers in particular.