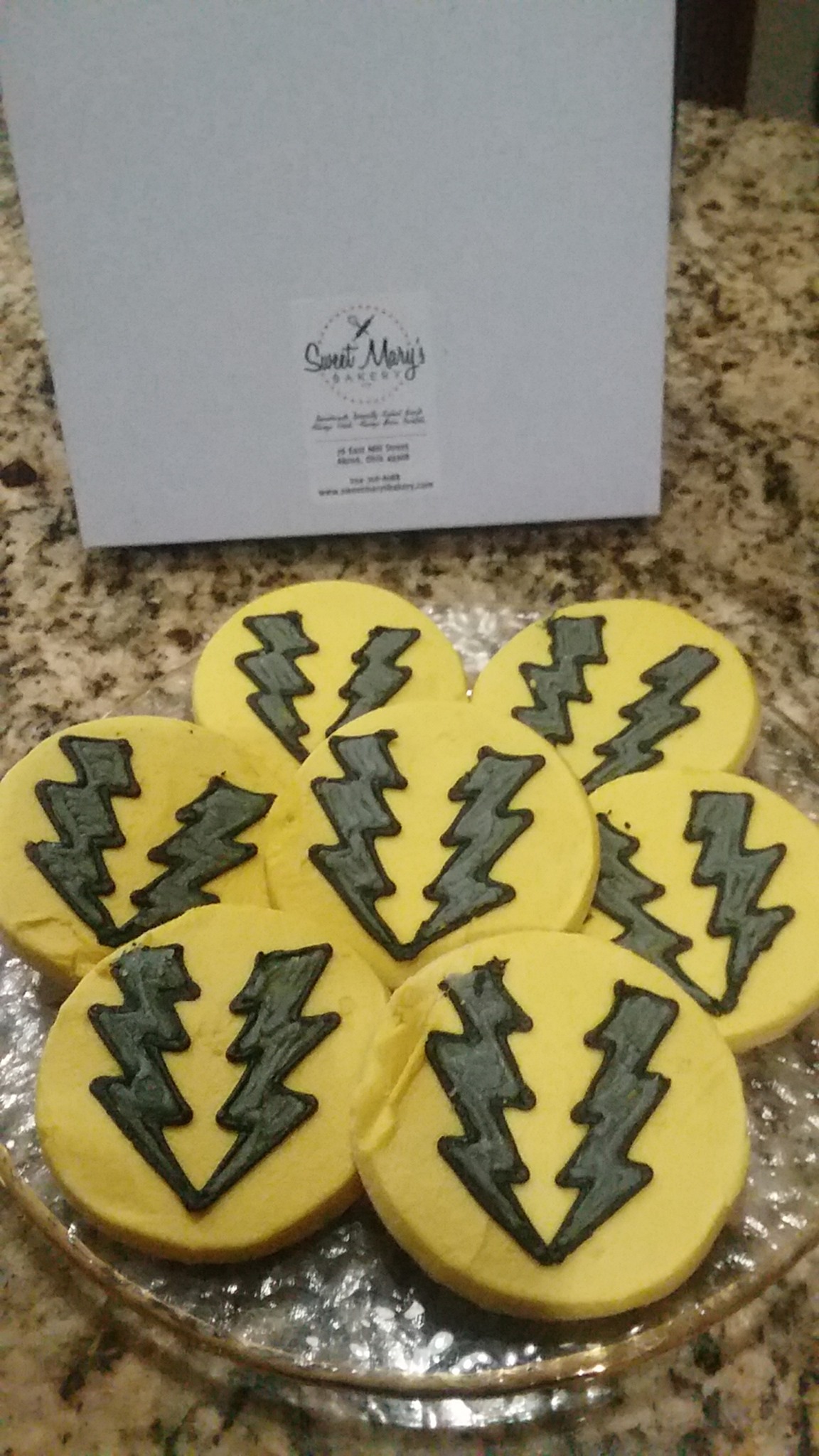 My Free Comic Book Day was spent at Rubber City Comics in downtown Akron, Ohio. I had a wonderful time signing comics for the fans and selling them Black Lightning and other books I’d written. One of my biggest sellers was Scooby-Doo Team-Up #46 wherein brilliant writer Sholly Fisch teamed my creation with Scooby, Shaggy, Velma and the rest of the gang. Thanks to Sholly’s respect for the characters who guest star in the book, as well as his uncanny knack for seamlessly including “in jokes” and still tell a solid suitable-for-all-ages Scooby-Doo tale, Scooby-Doo Team-Up has become my favorite current comic-book title. It gets my highest recommendation.

A special FCBD treat – and I do mean “treat” – were the scrumptious Black Lightning cookies from Sweet Mary’s Bakery, located next door to Rubber City. The bakery created several different cookies tying into the event. I might be a wee bit biased here, but I thought the Black Lightning ones were the best. 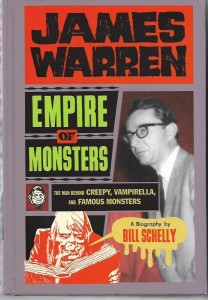 Joe Kubert. Harvey Kurtzman. John Stanley. Bill Schelly is arguably our finest comics biographer. His latest triumph is James Warren, Empire Of Monsters: The Man Behind Creepy, Vampirella, And Famous Monsters [Fantagraphics Books; $29.99], the amazing, engaging tale of one of the most interesting and pivotal publishers of the 1960s and beyond. Though I only knew Warren briefly and probably only had a half-dozen or so real conversations with him, Schelly’s Warren is precisely the intriguing guy I knew in New York City.

If you were a 1960s kid into monster, Famous Monsters of Filmland was a magazine you bought whenever you could scrape together the cover price. Already crazy about comic books, I would do chores to earn “extra” money. I’d sweep out a barber’s shop. I’d collect old pop bottles. I didn’t get every issue of Famous Monsters, but I got many of them.  Editor Forrest J Ackerman was the magazine’s “star.” It wasn’t until Warren launched the black-and-white comics magazine Creepy that his name became part of my comics world.

Creepy and companion magazine Eerie were inspirational. During the unfortunate Bill Parente years, I sent at least two scripts to the magazines. Neither sold, but editor Parente included some helpful tips with the rejections. I never did sell to Warren Publications, but the early issues of these magazines and Vampirella remain among my all-time favorites. But I digress when I should be extolling the wonders of this biography.

Schelly details Warren’s childhood. He shows the man’s ambition and talent. He reveals the persona Warren cultivated and how he lived up to it more often than not. He tells of Warren’s great successes and awful defeats. He pulls no punches, but the Warren that emerges is the one I knew and wish I knew better. Schelly recognizes that James Warren is rightfully a comics legend.

Fantagraphics does its usual magnificent job designing this book. It is as handsome a hardcover as you’ll find. Running a little over 350 pages, it is a bargain at its $30 price tag and even more so if you order it at a 30% discount from InStock Trades which sponsors this column.

James Warren Empire of Monsters is a riveting book that should be in the home library of everyone who’s serious about comics history. It’s my pick of the week. 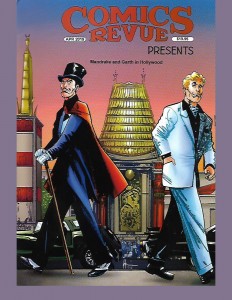 Rick Norwood’s Comics Revue [Manuscript Press; $19.95] remains one of my favorite magazines. Each 130-page issue is packed with great comic strips of the past. Issue #395-396, the most recent, also has a brand-new cover by Howard Chaykin.

The cover highlights the Hollywood adventures of two heroes: Garth by legendary writer Peter O’Donnell (the creator of Modesty Blaise) and artist Steven Dowling, and Mandrake the Magician by creator and writer Lee Falk with art by Phil Davis. The Mandrake sequence is a heartwarming tale of the master magician’s encounter with a spoiled child star. The Garth tale actually takes place after his time in Hollywood and features a mysterious man name of Malvino. Has Garth finally met an adversary equal to himself? I’ll have to wait until the next issue to be sure.

My favorite stories this time around are Roy Crane’s Buz Sawyer in which the title hero is reunited with his believed-lost-at-sea wife and Stan Lynde’s Rick O’Shay. The latter kicks off what promises to be the hilarious tale of gunslinger Hipshot Percussion trying to give up smoking. Lynde was a master of action, drama, suspense and humor. Truly a classic cartoonist and strip.

Other features include the Phantom, Steve Canyon, Krazy Kat, Sir Bagby, Casey Ruggles, Flash Gordon, Alley Oop, Steve Roper, Tarzan and Gasoline Alley. I recommend Comics Revue to all fans of great comic strips. You can get subscription information by going to the magazine’s website: www.comicsrevue.com 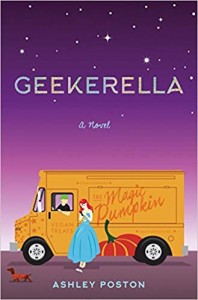 This week’s odd entry is Geekerella by Ashley Poston [Quirk Books; $18.99]. Billed as a “Once Upon a Con” fangirl fairy tale, it’s a young adult novel with a modern take on Cinderella. Geek girl Elle lives with her “evil” stepmother and two “evil” stepsisters. She’s treated like a servant in the house the stepmother inherited from Elle’s late father.

What Elle shared with her parents was a love of Starfield. Her dad founded a convention honoring the cult TV series. He and her mother were amazing cosplayers who attended the convention as Federation Prince Carmindor and Princess Amara. Those are the memories which keep her going and inspire her Starfield blog.

Teen actor Darien Freeman is playing Carmindor in the reboot of the show. Elle loathes the notion of him in the role and is brutal on her blog. What she doesn’t know is that he’s a Starfield fan, too. Adding to the fun…they’ve been texting one another with neither knowing the true identity of the person for whom they’re developing feelings.

What amused me most about the novel is how it adheres to the basics of the Cinderella story while modernizing it and throwing more than a few surprises into the mix. There are heartbreaking moments and there are soul-lifting moments. There’s even a grand ball following the convention’s costume competition.

I enjoyed Geekerella, so much so that I’ll be reading its sequel – The Princess and the Fangirl – as soon as I can get the book from my local library. This novel won’t be of interest to all readers. However, if you like stories about fans, I think you’ll get a kick out of this one.