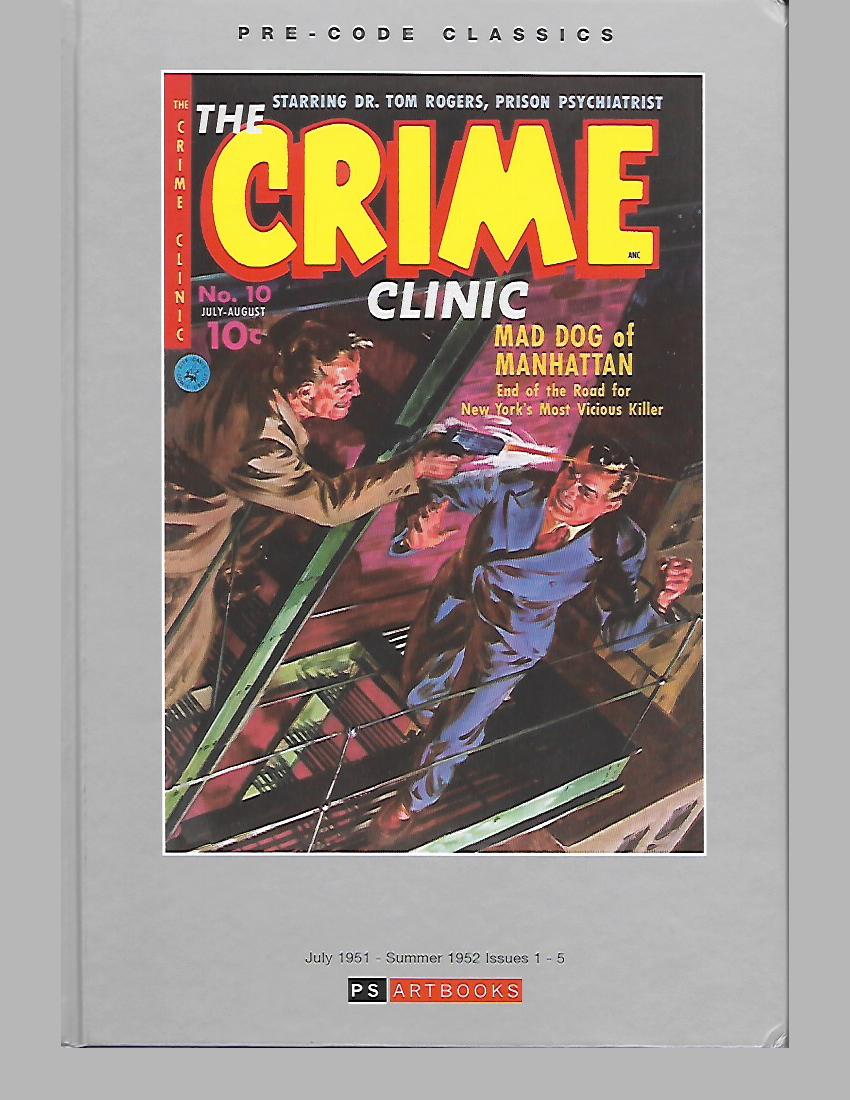 Much to my dismay, I find I have wearied of PS Artbooks’ hardcover collections of classic and usually not-so-classic horror comics of the 1950s. While I am endlessly fascinated by the comics published by companies that are no more than ghosts today, I simply read too many of the volumes in too close proximity to one another. Clearly, I needed something different.

Perhaps PS read my mind, but I absolutely loved Pre-Code Classics: The Crime Clinic Volume One [$44.99]. This was a crime comic with a difference. It starred Dr. Tom Rogers, a prison psychiatrist, and focused on returning convicts to society by treating their mental and sometimes physical ailments. This book collects all five issues of the unusual title cover-dated July 1951 to Summer 1952.

While the Batman comics of the 1940s and 1950s – back when Batman was sane – did several wonderful stories about reformed criminals, reformation was the core value of the Dr. Tom Rogers stories. Even when faced with seemingly unsalvageable criminals, the good doctor found a way to reach them and offer them a chance of a better life in the future. With prison and sentencing reform finally becoming something of a bipartisan issue, this social justice comic was way ahead of its time.

Though the Dr. Tom stories are the highlights of these issues, the title offered some other interesting features as well. “The Padre” appeared twice; he was a Catholic priest in a slum neighborhood who worked to keep boys and older men alike on the straight and narrow.
Private eye Barney Bailey appeared once. In addition to the series stories, Crime Clinic would feature one-off stories with surprise endings, a true-crime tale written by Carl Wessler, multiple crime-related gag pages and the usual text stories I never seem to read. Maybe someday.

Outside of that one story by Wessler, we don’t know who wrote Crime Clinic stories. We do know the artists.

Pre-Code Classics: The Crime Clinic Volume One is my pick of the week. I know PS plans some other crime volumes and hope they delve into western, romance, war and teen humor as well. I would buy all of them. And, just to be clear, I haven’t given up on their horror volumes. I still buy them all, still intend to read them, and still plan to do some different things with them in the future. 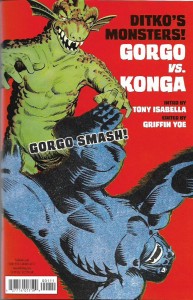 I have worked with some fairly childish editors in my nearly fifty years in comics, but eight-year-old Griffin Yoe is the first actual child listed as editor of a project to which I contributed. The son of Craig Yoe, Griffin picked the four stories reprinted in Ditko’s Monsters: Gorgo vs. Konga [Yoe Books/IDW; $9.99].

One of the best things about Ditko’s Monsters: Konga vs. Gorgo is Griffin’s brief notes as to why he picked the stories he chose for this flipbook. One side is Gorgo, the other side is Konga and the whole package is delightful.

The Gorgo side has an introduction by me. It reprints the Charlton Comics adaptation of the Gorgo movie as presented by the prolific writer Joe Gill and artist Steve Ditko. The second story is “Gorgo Captured” from 1963. Gill and Ditko has a knack for combining big monster action with human comedy, drama and romance.

The Konga side has a wonderful remembrance of Ditko by his nephew Mark. It skips the Konga movie adaptation – the movie was not good – and goes to two 1962 stories. The Konga series had continuity of a sorts and the second of these two tales begins directly after the first of them. More great stuff.

Daddy Yoe has collected all the Ditko-drawn Gorgo and Konga comic books in handsome hardcover editions that are worth whatever you have to pay for them. As good as these books are, I dream for the complete collections of Gorgo, Konga and Reptilicus/Reptisaurus. Even when not drawn by Ditko, these are fun comics that I continue to enjoy to this day. 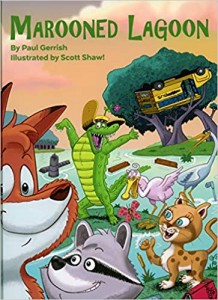 Scott Shaw is one of my favorite cartoonist. When I learned he had illustrated a children’s book, I ordered it immediately. Written by Paul Gerrish, Marooned Lagoon [Play-tone, LLC; $19.99] is a 76-page oversized – 12.2 x 9.4 inches – hardcover adventure of very young animals separated from their families by a hurricane.

The kid critters must work together to survive. Not every one is a team player. Some of the alliances are scary at first. But, at the end of this first book, friendship and working together keeps the youngsters safe.

The story is entertaining. The writing is great. The illustrations give me more reason to consider Shaw one of the finest cartoonists working today. I’m looking forward to the next book in the series.

Marooned Lagoon is suitable for all ages. I wish my kids were still young enough for me to read it to them. But, since they’re 30 and 27 years old, respectively, that would be awkward.

I’ll be back with more reviews next week.