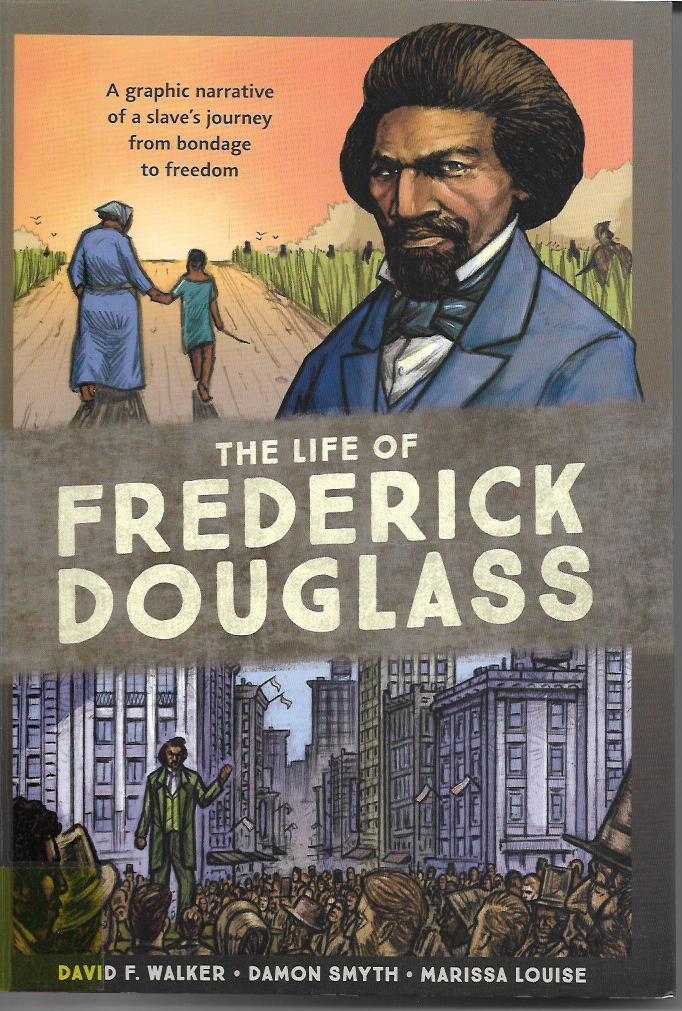 As this week’s column posts, I’m traveling back to my Medina, Ohio home after spending the weekend attending the Big Apple Comic Con in New York City. My mystic powers tell me I had a wonderful time introducing my Saintly Wife Barb to my friends there.

If I’m reading my schedule correctly, I won’t have to hit the road for another event until the Great Philadelphia Comic Con on April 12-14. An entire month of staying at home, writing, watching movies and TV shows and, of course, reading cool stuff so I can tell you about it right here in “Tony’s Tips!”

First up this time around and my pick of the week is The Life of Frederick Douglass: A Graphic Narrative of a Slave’s Journey from Bondage to Freedom by David F. Walker with illustrators Damon Smith and Marissa Louise [Ten Speed Press; $19.99]. After escaping from slavery, the brilliant Douglass became many things. He was a social reformer, a crusading abolitionist who fought for women’s rights as well as for the freedom of slaves, a riveting orator, a compelling writer and a statesman whose services were requested by presidents and other powerful men. He broke barriers in many ways, including being praised by a history-challenged president who thought he was still alive.

Walker does a magnificent job capturing Douglass in this narrative. Readers will feel the degrading horror that was slavery and revel in how Douglass overcomes his past to become a beacon of hope for many, even today. There are parts of this book that are difficult to read. Yet, at its conclusion, despite all the parts of his life that Douglass could never know, there is triumph. Even knowing we as a nation face challenges born of the past and not yet conquered, there is triumph.

Artist Smith and colorist Louise provide visuals that are dramatic and fluid and real. Several prose articles throughout the book add a greater understanding of Douglass and his world.

The Life of Frederick Douglass is a graphic novel that should be in every personal, public and school library. It should be nominated for every comics industry award for which it is eligible. It is a work to be cherished. 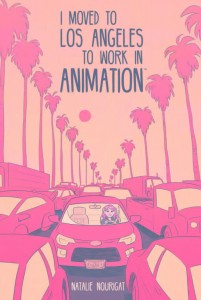 I Moved to Los Angeles to Work in Animation by Natalie Nourigat [BOOM! Box; $9.99] is more than the story of a woman who left her life in Portland to pursue a new career. Nourigat had been making her own comics and working as a commercial artist in Portland. But, as I’ve been hearing from comics friends who lived there, Portland has become more expensive with each passing year. Los Angeles isn’t cheap, but opportunities there can come with good pay and benefits.

Nourigat takes her readers through her journey, showing all of the many steps it takes to build a reasonably stable career in TV and movie animation. Though the book is a slim 96 pages, she includes copious advice toward pursing such a career. Finally, she brings in several other cartoonists to give their perspectives on working in Los Angeles and in animation.

I Moved to Los Angeles is a mightily useful book. Nourigat relates her life and her advice in clear and humorous style. You get a good feel for her and her work. I liked this book a lot.

As graphic works go, this is fairly inexpensive. I’d recommend it to fans who are interested in the behind-the-scenes stuff and also, especially, to students who are contemplating an animation career. Kudos to Nourigat for sharing her knowledge. 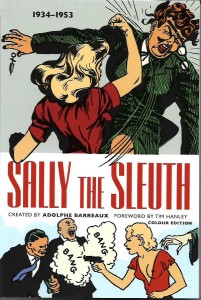 I call right now the real Golden Age of Comics because of the vast availability of so many different kinds of comics from all over the world and from every era of comics history. Addressing the latter, we are getting collections of great old comics and comics that are perhaps not so great but which are just plain fun or of historical interest.

Sally the Sleuth [Bedside Press; $20] clicks off both my fun and my historical import boxes. Created by Adolphe Barreaux, Sally got her start in 1934 in two-page, black-and-white comic strips that ran in Spicy Detective Stories. Sally’s adventures were compact and, for the era, quite salacious. The feisty lady rarely remained clothed past the first page of any story. She was tied up by the villains in many tales and, occasionally, whipped while being held captive. Even so, the criminals were always brought to justice, fatally in some cases, and Sally was always part of that justice.

Though Sally worked for a “chief” who also seemed to be her lover and he rescued her most of the time, she solved many cases on her own and rescued him on occasion. She was sassy and sexy. What Doc Savage would have called a “brick,” though the Man of Bronze would have blushed at her nudity and her suggestive dialogue.

Just from a storytelling standpoint, I am impressed by the ability of the writers to tell a fairly complete story in just two pages. Later in her career, the stories would run four pages.

In 1950, Sally left the Spicy Detective Stories pulp magazine for Crime Smashers. Her adventures ran in the first fifteen issues of that comic book. The stories were longer and in full color. Also, Sally kept her clothes on. I found that a little bit disappointing. Don’t hate me.

Editor Hope Nicholson did a terrific job with this collection. The introduction by Tim Hanley is fascinating.

At just under 300 pages, Sally the Sleuth delivers a lot of fun for a very reasonable price. I recommend it.