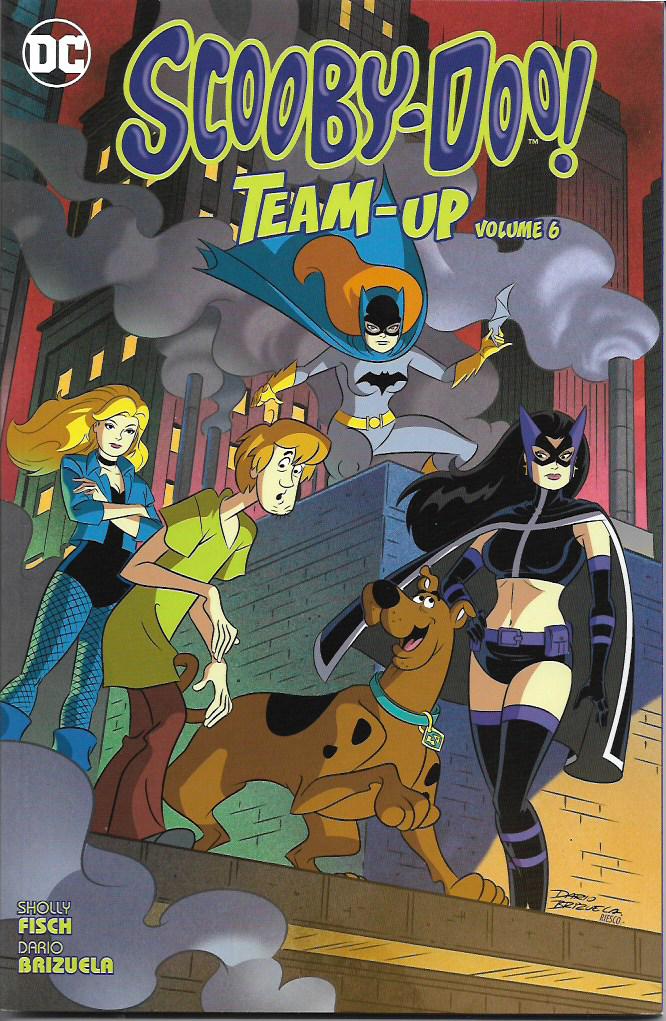 Whew! This year got off to a busy start, what with my trip to the Black Lightning set in Atlanta, a couple comics conventions and a few personal matters. I’m back in the saddle and will once again be bringing you tips on great comics on a weekly basis.

My second 2019 convention was Pensacon in Penascola, Florida. It’s my favorite convention, partly because the whole city embraces the event. The airport changes its gates to “stargates.” Several of the city’s best restaurants adopt themes appropriate to the convention. My son Ed and I had a great meal at the Fish House, which was all decked out as Hogwarts. I barely noticed the dementor that hovered over me while I dined. The restaurant even took a photo of me for its Wall of Fame. When I dine there next year, I’ll be able to see myself hanging among presidents, astronauts, entertainers, sports stars and others. I’ll be the photo people will be pointing at and asking “Who the heck is that?”

Let’s make it official. Scooby-Doo Team-Up is my current favorite ongoing series. Sholly Fisch writes brilliantly funny stories that work on multiple levels, making the book accessible to and fun for readers of all ages. Dario Brizuela delivers instantly recognizable visuals for the Scooby Gang and their guest stars. His storytelling skills are just good.

Scooby Doo Team-Up Volume 6 [DC; $12.99] collects issues #31-36 of the series. We get team-ups with the Atom, Atom Ant, the Legion of Super-Heroes, the Birds of Prey (Batgirl, Black Canary, Huntress], Yogi Bear and Angel and the Ape. The Birds of Prey story has a line that made me laugh out loud. Asked why she isn’t traveling around the country with Green Lantern and Green Arrow, Ms. Lance replies “Sometimes I need a break from Green Arrow’s constantly talking about ‘hideous moral cancer’ and ‘failing this city.’” Fisch draws from all the incarnations of the characters as he crafts adventures that are both funny and thrilling.

The afore-mentioned Angel and the Ape adventure includes more than a dozen characters from DC humor titles of the 1960s. Fisch gives us alternate takes on Bob Hope and Jerry Lewis while guest-starring the Inferior Five and many others. The final character reveals of the story had me cackling with delight.

I recommend Scooby-Doo Team-Up for comics readers of all ages. I’ve been reading them through my local library system, but I have just now purchased all six volumes. They deserve a place in my personal comics library. 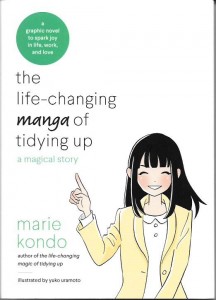 My office is a mess with books and DVDs and Godzilla knows what all over the place. The same holds true for my son’s old bedroom, now the repository of boxes of comics…and a corner of my wife and my master bedroom…and half of our downstairs family room…and what I laughingly call my reading room…and half our basement. My great plan to reduce and finally organize my Vast Accumulation of Stuff has clearly not survived contact with the enemy. And so I turn to the East for wisdom.

Marie Kondo is a #1 New York Times bestselling author and the star of Netflix’s Tidying Up with Marie Kondo. Drawn by Yuko Uramoto, The Life-Changing Manga of Tidying Up: A Magical Story [Ten Speed Press; $14.99] distills Kondo’s methods into a fun story of a young woman who, with Kondo’s guidance, transforms her messy apartment, her unorganized work and her love life. I’m doing okay with my love life, but, geez, could I use help with the other stuff!

I got a kick out of this manga. Watching Chiaki get her, err, stuff together was enjoyable. I considered Kondo’s methods with far more interest than I would have imagined at the start of the book…and started thinking about which of her methods would be useful to me.

Keeping the possessions that spark joy is a key element of Kondo’s methods. This manga certainly sparked joy in me. I would recommend to anyone who likes comics that are outside the usual. I would also recommend as a gift for friends and other loved ones who might not be avid comics readers, but would enjoy this comic.

Now to start tackling my clothes closets. Because old clothes that no longer look good on me definitely do not spark joy. 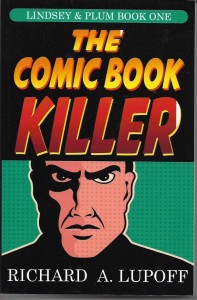 Originally published in 1988, The Comic Book Killer by Richard A. Lupoff [Borgo Press; $16.99] is the first in the author’s Lindsey and Plum series. Lindsey is a white suburban bachelor who works for an insurance company and who takes care of his invalid mother. Plum is a black detective. Forced to work together on a case involving the theft of a half million dollars worth of comics and the murder of the comics store owner putting the pricy collection together for a client, they are as different as two people could be.

The intricate plot stretches back to World War II. Comics history plays a key role, as does the history of the faux-comics that are part of the pricy collection. Unsuspected connections arise as the case progresses, as does romance between the insurance investigator and the beautiful detective. I don’t want to spoil this novel any further, but I will add that those connections elicited more than one “Wow!” from me when revealed.

This Borgo edition was published in 2012 and it’s the edition that I recommend to you. In addition to the prose novel, it contains 20 pages of faux-comics from Gangsters at War. One of the stories is drawn by Trina Robbins.

The Lindsey and Plum series runs to nine books. All of them involve collectors of one sort or another. This is the only one featuring comic books. But I liked this debut novel so much that I’m reading the entire series.

My next convention appearance is the Big Apple Comic Con, March 9-10, at The Penn Plaza Pavilion, Pennsylvania Hotel, 401 7th Avenue in New York City. Guests include William Shatner, Mike Colter, Jim Steranko and many others. I’d love to see you there.