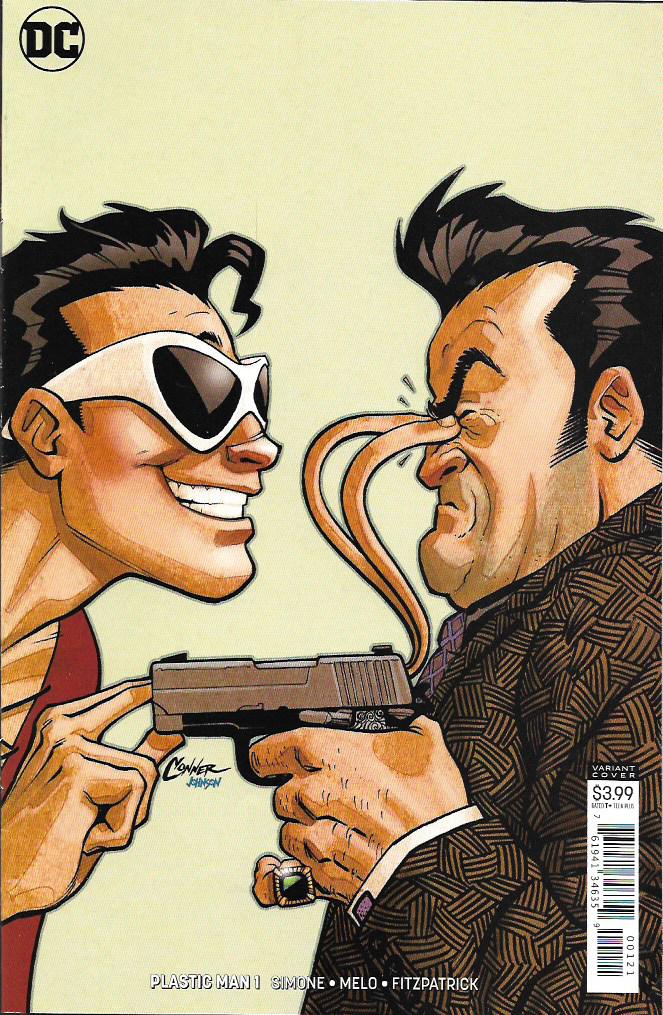 This is my final “Tony’s Tips” column of 2018. It was a good year for me. I was delighted by the positive critical response for Black Lightning: Cold Dead Hands, currently available in trade paperback wherever fine comics are sold. Like, for example, though the great people at InStockTrades.

Full disclosure. InStockTrades sponsors this weekly column. But I am also a customer of theirs. I recommend their prices and service to all of my readers here.

I appeared on several TV news shows last year. I was interviewed by dozens of print and online journalists. I spoke at several schools and libraries. I received love and respect from countless fans and entertainment industry professionals. I count comics professionals among the later because, more than ever, comics drive the TV shows and movies we love.

This concluding year was not perfect. We lost many dear people and saw frankly disgusting behavior on the political and social media fronts. But hope remains and, like so many of you, I hope we will do better on all fronts in 2019. Always forward.

Plastic Man #1-6 by Gail Simone with artist Adriana Melo and color artist Kelly Fitzpatrick [DC Comics; $3.99 per issue] checks off my Plastic Man boxes. It is a redemption story and you know how much I love those. It portrays Plastic Man as funny and capable without going dark as DC did in the Metal and Terrifics titles. It has as much heart as I’ve seen in any recent super-hero comics. It boasts some terrific guest heroes and villains.

Simone remains one of our art form’s best writers. Her Plastic Man is far from perfect, but a hero at his core. Pado Swakatoon is one of the best supporting characters Plas has ever had. The plot takes twists and turns I didn’t see coming…and that’s no mean feat for a guy who’s been doing this as long as I have. At the end of these six issues, I felt I had read a satisfying story and wanted more of the same as soon as possible.

Plastic Man is the kind of comic we need more of from DC. A writer puts their mark on a character and it’s obvious that writer has a better grasp of the character than any of the other writers at DC. When it happens it’s wondrous to behold, though there’s always the fear that the company won’t recognize the priceless gem that’s been laid before them.

If you’re more a trade paperback reader, Plastic Man [$16.99] will be available in that format come April. The six-issue series is my pick of the week. 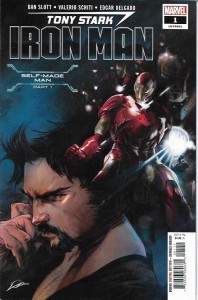 Writer Dan Slott takes chances. Yes, because he writes high-profile Marvel characters like Spider-Man and the Fantastic Four, he likely has the approval of his editors. Still, I find myself awed by some of the directions he has taken these iconic heroes. Currently, I’m very much enjoying Tony Stark: Iron Man. I have read the first six issues {$4.99 for #1, $3.99 for each of the other issues] and I’m impressed.

The corporate intrigue, human drama and pseudo-science tickles me. Stark is about to give the world a virtual reality system that is ridiculously cool. Business rivals and the odd super-villain have been causing problems. Tony and his birth mom are having troubles connecting. His company is safeguarding the rights of A.I. beings like Jocasta, while Jocasta herself is facing interesting personal issues. And let’s not leave out the budding romance with the Wasp and the evil brother. It’s such a jumble of stuff, some of which borders on cliche. However, all of it comes together to make for an entertaining series.

If, as with Plastic Man, you prefer reading comic books in trades,you won’t have too long to wait for Tony Stark: Iron Man Vol. 1: Self-Made Man [$16.99]. The collection of the first six issues is due to hit the stores in January. 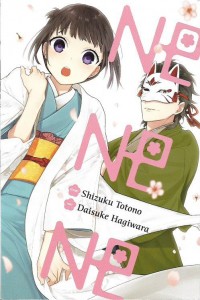 Is there a manga sub-genre involving young women in love with older men? A few weeks back, I reviewed After the Rain 1 by Jun Mayuzuki. It’s the story of a high school student smitten by the 45-year-old manager of a family restaurant. What seemed like a creepy premise turned out to be a rather sweet tale of these two different people chastely exploring their feelings for one another.

For this week’s column, we’re looking at Ne Ne Ne by Shizuku Totono (story) and Daisuke Hagiwara (art). Published by Yen Press with a “T” for “teen” rating, this seemingly done-in-one volume manga has a young woman still in her teens married to a man twenty years her senior. It’s an arranged marriage to secure the fortunes of both of their families. Oh, yeah, and she’s never seen her husband’s face. He wears a cat/fox mask because he’s always “on call” for dealing with supernatural matters.

Koyuki wants to be a good wife to Shin, but she’s inexperienced in the ways of wedded bliss. It turns out Shin is just as innocent as his much younger wife. What drives the story and what also provides much gentle humor is the couple’s mutual difficulty in navigating this unfamiliar territory. Lest you mistakenly think Ne Ne Ne has  salacious content, let me add Shin has vowed not to have sex with Koyuki until she is older.

Despite their lack of physical intimacy, Koyuki and Shin do grow as a couple. They are very likeable characters. I’m disappointed there aren’t more volumes to their stories. I would like to spend a bit more time with them.

Because of the premise, I don’t think this manga will entertain all readers. I thought it was well-written and well-drawn. I recommend it based on its likeable characters and the quality of the art and writing.

That’s a wrap for 2018. I’ll be back with more reviews in the new year before us. See you then.