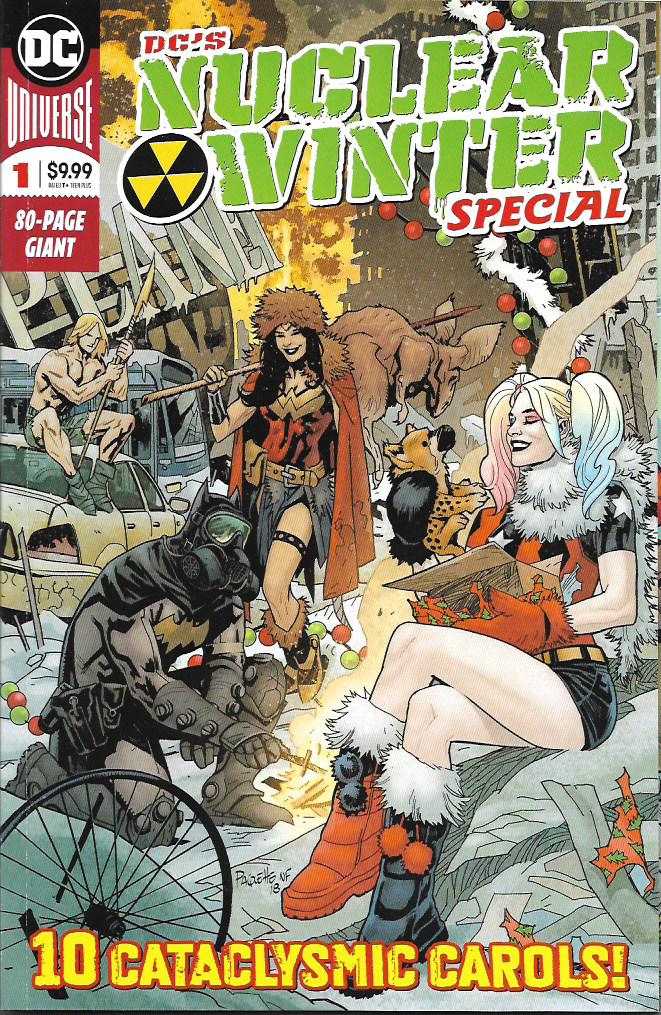 With two more “Tony’s Tips” columns to write before the end of the year, I’ve made the courageous choice to not present anything that remotely resembles a “Best of the Year” list. First off, you can’t swing a cursor without hitting one of the hundreds of those things that are available online. Second, I find such lists to be almost invariably useless.

You get the “Best of” lists that focus only on big books from the major publishers, be they the periodical Big Two or the mainstream graphic novel folks. You get the lists that concentrate on artsy-fartsy, navel-gazing that speak to the human condition, but only if  if you define the human condition as “first world problems” that a reasonable person would just deal with. You’ll get the lists that represent whatever demographic the list-maker considers themselves to be part of. Too many comics pundits are incapable of accepting comics outside their increasingly narrow interests and that doesn’t serve readers like me who like all kinds of comic books and graphic novels. There’s so much other good stuff out there.

So, for these final two columns of 2018, I’m just going to go with my usual three things I enjoyed and think some of you might enjoy as well. This week, it happens to be an item from DC, an item from Marvel and a prose and photos look at a pop culture icon. Next time out, it’ll be three other things. I roll how I roll.

DC Comics anthologies have been more miss than hit in recent years. With the exception of most of their 100-page giant collaborations with Walmart, I found them lacking in consistency and quality. To be honest, I wasn’t expecting much from DC’s Nuclear Winter Special #1 [$9.99] featuring “10 cataclysmic carols” from various post-apocalyptic DC continuities. Imagine my surprise when I enjoyed the issue so much I want to recommend it to you.

Edited by Alex Antone and Dave Wielgosz – and I’m a bit embarrassed those names are unfamiliar to me – the 80-page giant delivers some outstanding stories. The Rip Hunter: Time Master framing sequence by Mark Russell and artist Mike Norton serves that purpose and even offers some laughs along the way. The Superman One Million tale by Steve Orlando with artists Brad Walker and Drew Hennessy is a great story as is Paul Dini’s Firestorm tale with art by Jerry Ordway. I also liked stories featuring the Flash, Supergirl, Aquaman, Green Arrow, Catwoman and Kamandi. The only story that failed to hit the mark with me was the Batman 666 with its extremely lame attempt at delivering a semblance of a happy or even not awfully bleak ending. Not for the first time, I must conclude there’s too much Batman in the DCU. The company needs to recognize that it has an huge roster of equally great characters. 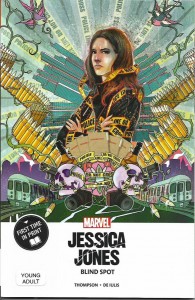 Between the excellent Spider-Man: Into the Spider-Verse movie and  the equally choice Jessica Jones live-action series on Netflix, I’m inspired to do some Brian Michael Bendis binge-reading in the next few weeks. While I’m getting ready for that, I read Jessica Jones: Blind Spot [Marvel; $19.99] by Kelly Thompson with artists Mattia DeIllus and Marcio Takara and colorist Rachelle Rosenberg. I read the graphic novel via my local library.

Collected here in print for the first time, Blind Spot was a Marvel digital original. Enjoying life with husband Luke Cage and their child Dani, Jessica continues her work as a private investigator. She returns to her office after a case to find the dead body of a former client she wasn’t able to help, and subsequently arrested by police officers for the murder. She learns of other powerful women who have been found murdered and discovers a link between her and all of them. After that, it’s super-hero noir with guest stars and surprising twists. By the end of issue #5 (of the six included in this trade paperback), we get a very satisfying ending to Jessica’s case. The trade paperback should have ended there.

The sixth issue is all about Dani’s birthday. It’s fun stuff until we arrive at the last-page cliffhanger. As some of you may recall from other reviews I’ve written, I absolutely loathe when a trade paperback doesn’t contain a complete story. In this case, I don’t even know where to go for the story that must follow that last-page cliffhanger. Is it available digitally? Will it be collected in a trade paperback? Did it ever conclude? Not remotely cool.

Thompson’s writing is first-rate. The art, colors and storytelling are very good as well. If there is more Thompson-written Jessica Jones out there, this book has me wanting to read it. I recommend Jessica Jones: Blind Spot to you, with the warning that it ends on the afore-mentioned cliffhanger. 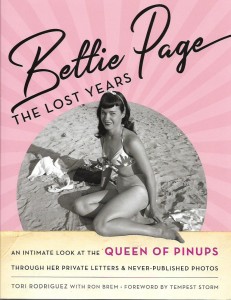 Bettie Page was a cultural icon whose images fascinate me and whose life is every bit as intriguing. Bettie Page: The Lost Years: An Intimate Look at the Queen of Pinups, through her Private Letters and Never-Published Photos by Toni Rodriguez with Ron Brem [Lyons Press; $27.95] explores Page’s life after the end of her modeling career. The large-size hardcover book is filled with rare materials from her sister Goldie Jane Page and supplied by Goldie’s son Ron. Often in Bettie’s own words, we get an examination of her life and her struggles beyond her unforgettable celebrity.

The book rounds out the extraordinarily special woman behind those instantly recognizable bangs, stunning figure and bright girl-next-door smile. It leaves me wanting more and, fortunately, there are other books about Bettie and even some swell comics from Dynamite Publishing. These are definite additions to my home library and I think you’ll enjoy them as well.