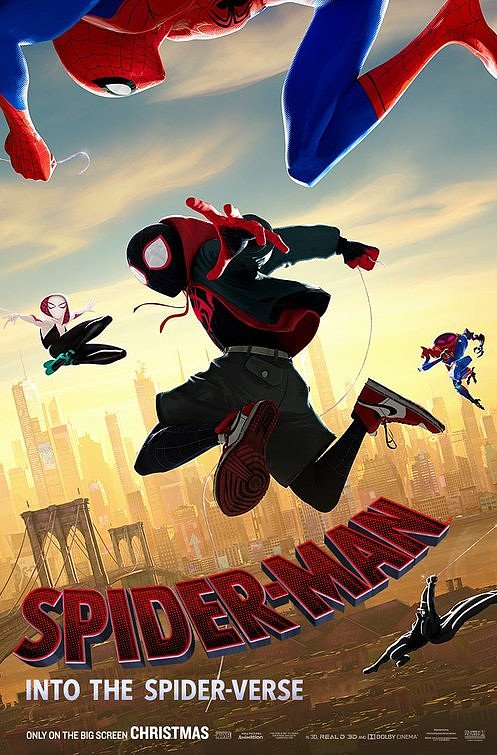 If you’re still doing your holiday shopping, then you might just be in the same panic mode as your favorite Tipster. Unless you order something online RIGHT NOW, that something might not arrive in time for your Christmas or other holiday shopping. However, since this is the season of miracles, I’ll offer a few more suggestions this week…and then go out and finish my own shopping!

Take your comics-loving loved one out for an afternoon or evening at the movies. Specifically, I recommend the amazingly spectacular Spider-Man: Into the Spider-Verse, an animated feature directed by Bob Persichetti, Peter Ramsey and Rodney Rothman from a screenplay by Phil Lord and Rothman and a story by Lord. Uncredited are over a dozen comics writers and artists who created the characters who appear in this movie. Bad form, Sony. Bad form.

Despite the slighting of comics creators not named Stan Lee, Steve Ditko or Brian Michael Bendis, this story of Miles Morales becoming his world’s Spider-Man and teaming up with spider-heroes from other worlds is an exciting, stylish and emotional presentation. Every aspect of the movie from the story to the animation to the acting to the graphics to the music is stunning. Here’s the Internet Movie Database summary of the movie:

Miles Morales becomes the Spider-Man of his reality and crosses paths with his counterparts from other dimensions to stop a threat to all reality.

Shameik Moore is great as the out-of-his-element Miles. His scenes with the beaten-down-by-his-world Peter B. Parker [Jake Johnson] are the heart of the movie. Liev Schreiber is gloriously scary as the Kingpin, as is Kathryn Hahn as Doc Ock. Other notable players include Hailee Steinfeld as Gwen Stacy, Mahershala Ali as Miles’ Uncle Aaron, Lily Tomlin as Aunt May, John Mulaney as Spider-Ham, Nicolas Cage as Spider-Man Noir and Marvin ‘Krondon’ Jones III as Tombstone. Stan Lee’s cameo gave me big feels.

Though the movie does contains scenes of violence, I would rate it as suitable for all but the youngest viewers. Some of the more meta humor will be lost on non-comics afficionados, but there are still plenty of other laughs to keep things light when you need a break from the more dramatic moments. Most importantly, Spider-Man: Into the Spider-Verse has a simple-yet-profound message at its core and had me feeling hopeful as I left the theater. Stories like this one have the power to inspire. When the film is available for purchase on Blu-ray or DVD, I plan to add it to my home video collection. It’s a keeper.

Note. If you’re really doing your gift-shopping up to the very last moment, keep in mind Aquaman opens on December 21. Advance reviews of the movie are extremely positive. If I finish my shopping, I’m thinking of taking myself to it on my December 22 birthday. I will be turning 67 years old this year. Yow, am I ancient! 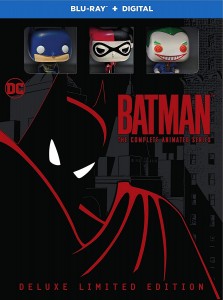 The deluxe limited edition of Batman: The Completed Animated Series is one of the nicest series sets I’ve seen. It’s expensive. Even at Amazon prices, you’re talking over a hundred bucks for the Blu-ray plus digital version. But, after buying one for a friend, I put it on my own wish list. If it doesn’t turn up under my tree, I’ll buy it for myself next month.

There are 25 in-depth features, including the new definitive making of Batman: The Animated Series documentary. Also include in the set are commentaries with show creators on a dozen episodes. Short of finding some way to transport a viewer into the episodes, I don’t think you could ask for a finer complete presentation of Batman: The Animated Series. Highly recommended. 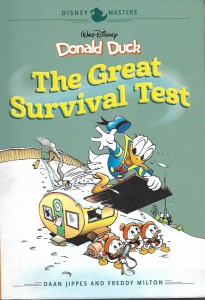 One more suggestion, though just reading the title might take too long for you to buy for a Christmas present. Disney Masters Vol. 4: Daan Jippes and Freddy Milton: Walt Disney’s Donald Duck: The Great Survival Test [Fantagraphics; $29.99] is the latest in a series of hardcover books collecting classic stories from some of the world’s best Disney comics storytellers.

These tales present Donald Duck at his best and worst. He competes with Gladstone Gander for various awards. He tries to teach lessons to his Junior Woodchucks nephews. He shows his mastery of various skills and, more often than not, is undone by his pride in what he accomplishes. There are 18 stories, all of them short enough for a quick break from your workday or a comedy nightcap at the end of a workday. I have been reading these books through my local library, but I think I’ll be buying them for my home library.

Jippes and Milton are masters of comics creation, but, fortunately, they don’t suffer from the results of that mastery as our old pal Donald does. The book also includes short biographies of the men, as well as a Milton piece on “Doing It the Barks Way.” Barks is, of course, Carl Barks, the most masterful Donald Duck/Uncle Scrooge storyteller of them all.

Here’s wishing all my Tony’s Tips readers the happiest of holidays this Christmas season and the same to the great people at InStock Trades who sponsor these weekly review columns. Bless each one of you. As I see it, you’re all on the “nice” list.