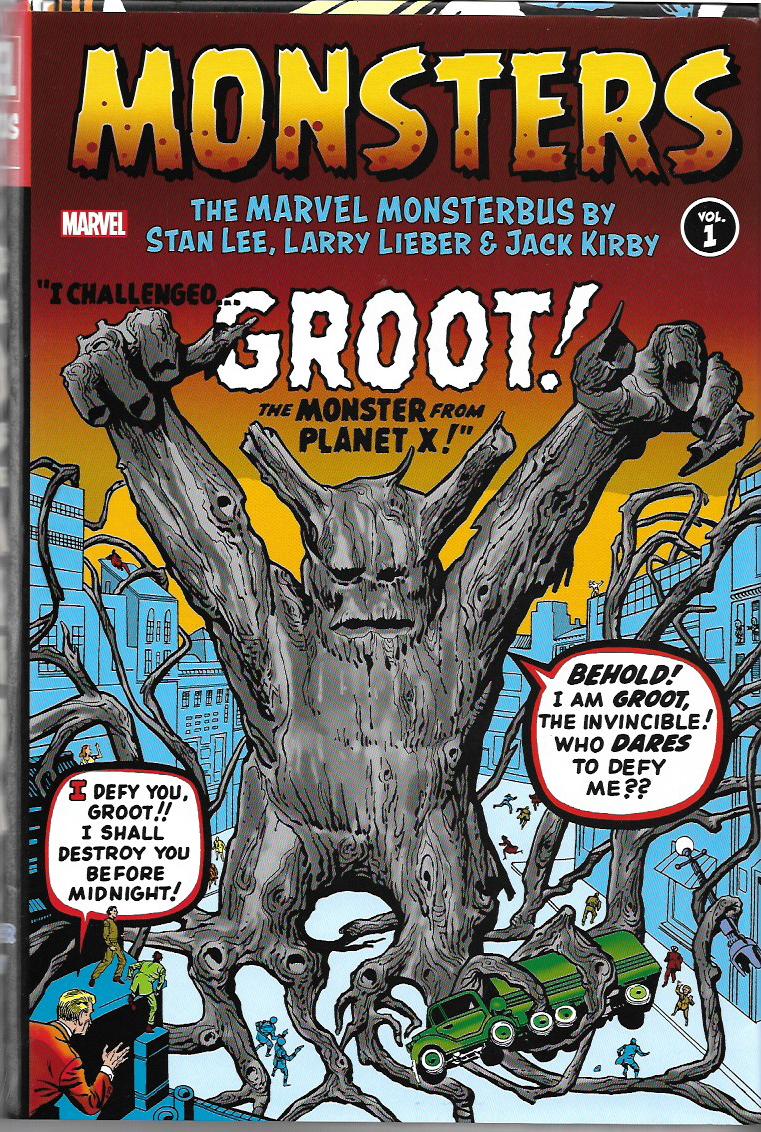 Christmas and the other seasonal holidays are drawing close, which means I’m going into “this would make a great gift” mode for the next couple weeks of “Tony’s Tips!” Let’s start with three terrific items, every one of which would make a wonderful present for those beloved comics readers in your life and every one of which should be considered a pick of the week.

If it weren’t for assorted Black Lightning comic books written by me and the amazing Black Lightning TV series, Monsters Volume 1: The Marvel Monsterbus by Stan Lee, Larry Lieber & Jack Kirby [$100] would hands down be my favorite comics thing of the year. This is almost nine hundred pages of entertainment I love: comics stories by Stan Lee, Larry Lieber and Jack Kirby, and giant monsters. This is practically a holy book to me.

The brilliant art by Kirby on display in this book has never before been collected in a book like this. Even in the late 1950s and the earliest 1960s, no comics craftsman did work as exciting as Kirby. His sure-footed layouts and ability to make the outlandish look so real knocks me out. He is well served by inkers Dick Ayers, George Klein, Steve Ditko, Christopher Rule and others. The reproduction of these tales is nothing short of magnificent.

The stories are equally choice. You’ll see the initial appearances of characters who would play roles in the future Marvel Super-Hero Universe. Groot gets the cover, but there are also debuts of Zemnu the Titan; the living Colossus who, for a variety of weird reasons,  would one day be known as “It!”;, Doctor Droom/Druid and Gorgilla the Living Gargoyle. You’ll witness the emergence of the “outsider hero” trope of nerds and down-on-their-luck individuals who would informed the super-heroes of the Marvel Universe. You’ll enjoy how popular monsters were brought back for a second shot at our planet. And, for the total Marvel geeks among us, you’ll get a kick out of how names were re-purposed for Marvel super-heroes and villains: the afore-mentioned Colossus, the Molten Man-Thing, Diablo, the Living Pharaoh, the Hulk, Goliath, Elektro, the Scarecrow, Thorr, Vandoom, Magneto and the Sandman.

Award-nominated editor Cory Sedlmeier deserves kudos and awards for what he has created here. Besides putting together this great tome, he also includes a section featuring original art pages from some of these stories and the covers of later comic books reprinting some of them. I already know I’m going to reread this first volume from cover to cover and I’ll do the same with the second volume. These books are creations to cherish. 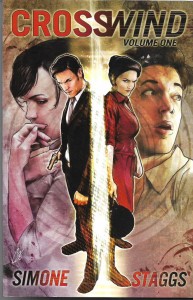 I think I’m developing a thing for female assassins. Over at Dark Horse, Joelle Jones and Jamie S. Rich’s Lady Killer is a favorite. I find the darker aspects of Marvel’s Black Widow intriguing. And now I’m wild for Juniper Elanore Blue, who is described as a smart but downtrodden Seattle housewife. Juniper is one of the two lead protagonists of Crosswind Volume One by Gail Simone and Cat Staggs [Image; $9.99].

The other protagonist is Cason Ray Bennett, described as a slick, ruthless Chicago hitman. The thing is…Juniper and Cason are now living in each other’s bodies, cursed to this change of life by a mysterious old man. Cason as Juniper and Juniper as Cason makes for an entertaining and harrowing adventure.

Cason is targeted by the mobsters he works for. Juniper is dealing with her cheating husband and a stepson who won’t accept her as his mother. Everyone around the two disparate individuals is wondering what the heck’s going on. This is brilliant writing with expressive art that delivers a satisfying explanation for what’s happening and a satisfying conclusion to this first six-issue arc. I’m 100% ready for the second volume and I hope it’s not long in coming.

Side note. This is one of the most respectful treatment of a male to female (and female to male) body switch I’ve read. Simone did her homework on this and sought counsel from members of the trans community. There’s one of the reasons I’ll read any comic book she writes.

Additional side note. Crosswind is being developed for television by Vanessa Piazza, an executive producer on the TV shows Lost Girl and Dark Matter. If it makes it on air, I’ll be there. 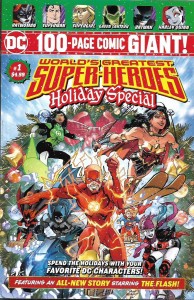 This last item is more of a stocking stuff, provided you can bear to roll it up to stick it in a stocking. Available only at WalMart, the World’s Greatest Super-Heroes Holiday Special #1 [DC; $4.99] is a hundred pages of seasonal adventures with some of your favorite DC Comics characters.

The special leads off with an all-new Flash story by Scott Lobdell with art by Brett Booth and Norm Rapmund. You’ll see many members of the Rogues Gallery in this tale with several great moments for Captain Cold. The other stories in the issue are reprints of tales from earlier DC holiday specials. The best of these are a Superman story by Dan Jurgens and Jackson Guice that always me makes me tear up a little every time I read it; and a Batman/Alfred tale by Tom King and David Finch. Other featured characters include Supergirl, Batwoman, Harley Quinn and Green Lanterns Jessica Cruz and Simon Baz. I’m a fan of these 100-page giants and this special might be the best one yet.

That’s all for this week. I’ll be back next time with more holiday gift suggestions. Whatever holidays you celebrate – and whose gonna stop you from celebrating all of them – my wish is that this time of the year be filled with joy for all my readers.