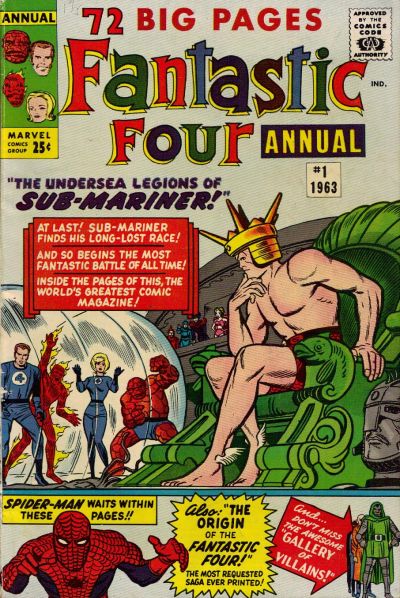 The Great American Comic Convention held a moving Stan Lee tribute on Sunday, November 19. The speakers included Tom DeFalco, Allen Bellman, Alex Saviuk, Ron Wilson, Randy Emberlin, Wendy and Richard Pini and others. I was happy to be at the tribute and participate in it. The crystal clear truth of Stan’s life is that he will never be forgotten. He will be remembered for his characters, stories and all he brought to the comics industry. In that spirit, I thought I would use this week’s column to talk about some of my favorite Stan Lee stories.

Many of these stories owe a great deal to Stan’s collaborators, be they artists like Jack Kirby or Steve Ditko or writers like Larry Lieber. This makes them no less Stan Lee stories. He was the light at the beginning of the tunnel and our guide on so many thrilling journeys. He will be forever honored for this.

Topping this too-short list is “Sub-Mariner Versus the Human Race!” [Fantastic Four Annual #1; 1963] by Lee, Kirby and Dick Ayers. At 37 pages of a desperate Fantastic Four defending New York from an invading Atlantean army, it was the most epic comics story I’d ever read at that time. The Four dealt with injuries and what seemed to be overwhelming odds. Namor was villain and tragic hero within the same story. The personalities of the characters were well crafted and somehow more real than the DC heroes and villains of the era. Add multiple bonus pages that introduced the FF’s world to me and the reprinting of the team’s origin and its first meeting with the Amazing Spider-Man. No wonder this comic book above all the others I’d read inspired me to want to write comics myself. It was, as I have noted elsewhere, a pivotal moment in my life.

I could write an entire column on my favorite Fantastic Four tales. I was bowled over by the Thing/Hulk battle (with key appearances by the Avengers) that ran in issues #25-26 [April-May 1964]. I would not be able to name many runs of a series that surpass issues #36-53 [March 1965-August 1966] with the introduction of the Frightful Four, the defeat of the Fantastic Four by their evil counterparts, our powerless heroes teaming with Daredevil to battle Doctor Doom in their Baxter Building headquarters, another battle with the evil FF, the introduction of the Inhumans, the Galactus trilogy, “This Man, This Monster!” (one of the finest examinations of heroism and redemption in comics history) and the first appearance of Marvel’s first black super-hero, the Black Panther.

Spider-Man’s origin is one of the best in comics, featuring as it did the line that sums up the essence of the super-hero genre for me: “With great power, there must also come great responsibility.” Then there’s Amazing Spider-Man #33 [February 1966} where Spidey is trapped beneath an impossibly large hunk of machinery with the life of Aunt May on the line. Moving into the Romita era, I was thrilled by “The Petrified Tablet Saga” than ran from issue #68 through #77 [January-October 1969]. 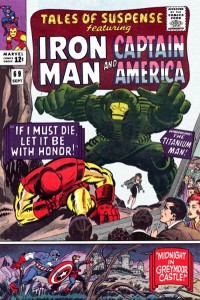 So many great super-hero stories. The audacious Avengers yarn where the founders left the team to a roster that consisted of Captain America and three reformed villains. The X-Men’s first meeting with the Brotherhood of Evil Mutants. Giant-Man battling the Human Top. Sub-Mariner’s quest in Tales to Astonish. Iron Man’s battle with the Titanium Man. The introduction of the Falcon. Daredevil trying to prevent the much more powerful Sub-Mariner from harming innocent New Yorkers. Those glorious double-sized issues of Silver Surfer, drawn by the legendary John Buscema. Thor. Incredible Hulk. Doctor Strange. Stan and his collaborators took the super-hero genre to places no previous creators had taken it.

I came to Stan’s other comics writing after I’d been hooked by the Marvel super-heroes. Giant monsters always fascinated me as a kid and still do so today. I think the classic pre-hero giant monster story is “Fin Fang Foom!” from Strange Tales #89 [October 1961 by Stan, Larry and Jack. Set in Taiwan and Communist China, the hero is the scholarly nerd we saw in many of these stories. Ridiculed by his father and his serving-in-the-army brother for not also being a solider, he uses his knowledge of mythology to awaken the ancient dragon of the title and trick him into destroying the Communist military forces ready to invade Taiwan…and then he tricks Fin Fang Foom back into his centuries-old slumber. Nerds often rule in these giant monster thrillers.

The Lee-Ditko “surprise ending” tales are also favorites of mine. Just five pages long and yet so many of them are unforgettable. I’m especially fond of “The Terror of Tim Boo Ba!” from Amazing Adult  Fantasy #9 [February 1962]. Tim Boo Ba is the supreme ruler of his planet until he is wiped from existence by a flash flood. It turns out his planet is part of a small scale model and the flood is the splash of water spilled on the model by a young boy. That blew my mind as a kid. 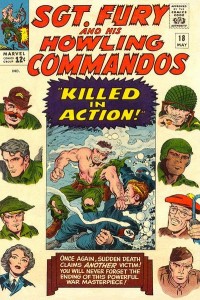 Stan’s work on Sgt. Fury and His Howling Commandoes was impressive. Though more pulp adventure than the war stories editor/writer Bob Kanigher was publishing over at DC Comics, they had their frequent moments of unforgettable human drama. The last page of issue #18 [May 1965] haunts me to this day. Having gotten up the courage to ask Pamela Hawley to marry him, Fury learns that she died rescuing others in a bombing attack and that her last words on this planet were “Tell my wonderful American sergeant how much I love him.” If you think that page has lost its impact over half a century later, guess again. I had tears in my eyes as I wrote this paragraph.

One more. A short story from Rawhide Kid #18 [October, 1960]. “A Legend is Born!” is one of my favorite Lee/Kirby collaborations.  In five masterful pages, Stan and Jack show their understanding of human nature, delivering action and one of the best “punch lines” ever.

The Kid is trying to have a peaceful meal when a bully, not knowing the identity of the young man, tries to push the Kid around.  Five panels is all it takes for Rawhide to show that bully and everyone else in the bar the folly of such behavior.

Rawhide escapes before the sheriff arrives.  The witnesses proceed to describe the Kid to the lawman.  They claim he was a giant with four guns the size of cannons and fists the size of sledgehammers. They say his voice was like the growl of a caged lion.  The sheriff is thrilled to have such a good description.

For the record: The Rawhide Kid had an unusually low, mild voice! He was five feet, three inches, in his stocking feet, and had never in his life weighed more than one hundred and twenty-five pounds! His hands were normal size, a mite on the small side, maybe, and he carried no more than two regulation Colt .45’s!

But human nature is what it is, and men will always color what they say!  That is why none of the records really agree about the Rawhide Kid – that is how legends are born!

This week’s column barely shows the top of the iceberg of terrific Stan Lee stories I have read since I first discovered Marvel Comics in the summer of 1963. I hope I wrote about some of your favorites this week. I know you have your own favorites. If you have your own column or blog, if you’re on Facebook or Twitter, please share your favorites with the rest of us.

Stan truly loved his fans and he gave us a plethora of reasons to love him right back. We will never forget him. Excelsior!

I’ll be back next week with some holiday gift suggestions. Or, as we usually refer to them, some reviews of cool comics and related items. See you then.