The 2018 convention season is winding down for me. This weekend, I will be at the always wonderful Grand Rapids Comic-Con in Michigan. This is my fourth time attending the event and it’s one of my all-time favorite conventions. Check out the show’s website for a list of all the great guests and programming.

On the following weekend, I’ll be wrapping up my 2018 appearance schedule as a guest at the Great American Comics Convention in Las Vegas. This will be my first time at a Las Vegas convention and, to make it even cooler, my Saintly Wife Barb will be attending it with me. I’ll have more details for you next week, but, at present, I’m scheduled to appear on the morning news program of the Las Vegas CW affiliate next Friday.

After these two cons, I get to stay home for two solid months and actually write stuff. My goal is to finish the two books I’ve been writing and continue developing the brand-new super-hero universe I’ve created. I have no idea how I’m going to bring this universe to the marketplace, but I’m having a grand time creating characters and concepts for it.

With Halloween behind us, it’s time to start thinking about spiffy holiday gifts for your loved ones. I have some suggestions for you this week. Let’s get started.

Barbara Slate sent me a signed copy of You Can Do a Graphic Novel: Comic Books, Webcomics and Strips [Richard Minsky; $34.95 hardcover and $24.95 paperback]. This is a new version of her 2014 You Can Do a Graphic Novel. I treasure this book both for Barbara’s friendship and because it contains terrific tips for even overly-seasoned pros like myself. At a time when there are a great many platforms for making comics and sharing them with an audience, Slate’s book will be helpful for all those comics readers who have been inspired by the comics they read to create their own works.

Slate writes about getting started making comics and then moves on to story, plot, art, creating character, writing, layout and even the dreaded creative block. It’s easy-to-understand advice that, at all times, also encourages creators to find their own style and be their best creative self. In addition to Slate’s teachings, You Can Do a Graphic Novel also includes informative information from pros like Tom DeFalco, Rick Parker, June Brigman, Barbara Brandon-Croft, Trina Robbins, Hildy Mesnik, Ray Billingsley, Danny Fingeroth, Mary Fleener, Dan Parent, Jerry Craft, Dean Haspiel and several others.

If I were teaching a class on creating comics, You Can Do a Graphic Novel would be required reading. It’s a book that will make a fine gift for any young person who wants to make comics. It’s a book I would put in the public or school library. It’s a book that’s not on my wish list, but only because I’m the first kid on my block to already have a copy of it. It’s my pick of the week. 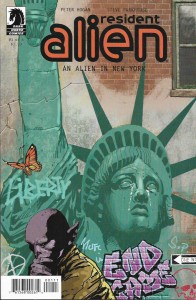 One of my favorite comic-book series will be coming to an end far too soon to suit me. Resident Alien: An Alien in New York by Peter Hogan and Steve Parkhouse [Dark Horse Books; $14.99] is the fifth and penultimate volume in the story of an alien stranded on Earth and posing as a doctor in Patience, Washington.

Doctor Harry Venderspeigle is beloved by his patients, almost none of which know he is a visitor from another planet who shipwrecked on our world. While he waits for a rescue that may never come, he  provides medical care for his patients and solves murders and other mysteries. The federal government knows there is an alien on Earth and, with each new story, is getting close to finding Harry. Each mini-series to date has delivered a satisfying story while moving the overall story further.

In An Alien in New York, Harry discovers alien symbols in New York street graffiti and travels to the Big Apple to see if they might lead him home. Traveling to such a large city is difficult for the doctor because the greater number of people make it more difficult for him to maintain the human image he projects. It’s a risk that he has to take.

The writing and art on this series is consistently excellent with co-creators Hogan (script) and Parkhouse (art) producing intriguing  stories with real drama. Parkhouse is a master of depicting emotion and Hogan’s scripts give him many opportunities to showcase that mastery. I’ve read every issue to date and then re-read them just to marvel at their talents.

I love the series so much I’m buying all of the trade paperbacks. If you’re a lover of mysteries or down-to-earth science fiction, I think you’ll enjoy this series as much as I do. If anyone on your holiday gift list likes these things, well, you know the drill. The books would also be great for public and school libraries.

If you’re a comics shop owner, expect interest in Resident Alien to go up soon. The Syfy channel has placed a pilot order for Resident Alien. Production on the pilot started in October with the popular  Alan Tudyk as Harry. I’m excited.

Resident Alien Volume 4: The Man with No Name

This outstanding series concludes with Resident Alien Volume Six: Your Ride’s Here. While I’ll miss the series, I’m looking forward to seeing how Hogan and Parkhouse bring it home. 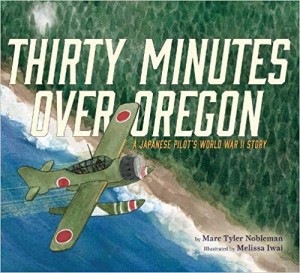 My last suggestion isn’t comics, but a fascinating look at a bit of World War II history seldom discussed. Thirty Minutes Over Oregon: A Japanese Pilot’s World War II Story by Marc Tyler Nobleman with illustrations by Melissa Iwai [Clarion Books; $17.99] is the tale of Japanese pilot Nobuo Fujita who, several months after the attack on Pearl Harbor, flew two bombing missions over the United States. Nobleman is best known in comics circles for writing non-fiction picture books about Jerry Siegel and Joe Shuster, the creators of Superman, and Bill Finger, the long-unsung co-creator of Batman. Iwai is the artist of many award-winning picture books.

Thirty Minutes covers Fujita’s military service and continues on to describe the remarkable series of events that led to him becoming an honorary citizen of the very town he tried and failed to bomb. It’s a tale of atonement and redemption, as well as a model of how even former memories can put aside their past animosity and come together in friendship.

Though the book is aimed at school children in grades one through four, I found it to be entertaining and informative. Indeed, this incredible story would make an excellent movie. It might not reach the box-office success of Crazy Rich Asians, but I think it would find an appreciative audience. I’d go see that movie.