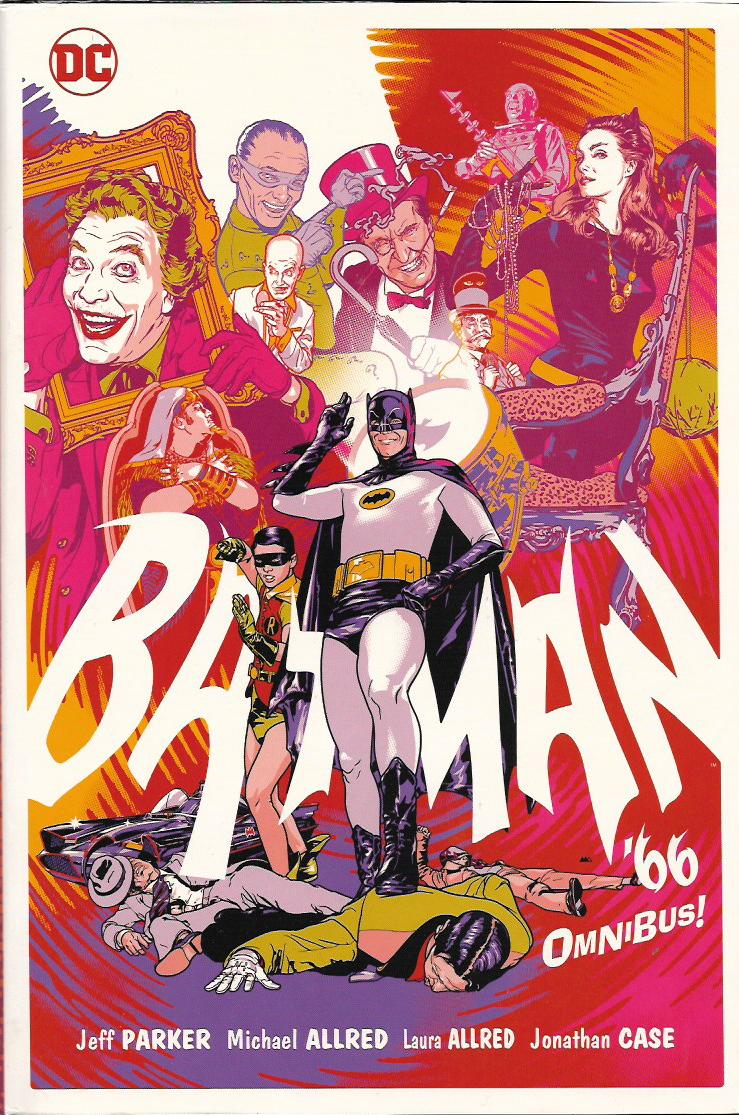 If you have been an exceptionally good child this year, then maybe Santa Claus or your other preferred holiday icon will bring you a copy of the Batman ’66 Omnibus [DC Comics; $125] for Christmas. The reindeer won’t much like this because this handsome hardcover book weighs six pounds, but, hey, I don’t see where they have a lot of room to complain, what with their working only one night a year and all. They must have a great union. That I had to purchase my own copy of this tremendous tome probably tells you more than I’d like about my own place on the naughty/nice scale.

The 966-page omnibus collects Batman ’66 #1-30 and Batman ’66: The Lost Episode #1 plus the story behind Harlan Ellison’s outline for that last comics. Ellison wrote a treatment for the TV series back in the day, but it was never produced. Len Wein took that treatment and adapted it into a comics story drawn by Jose Luis Garcia-Lopez. It’s one of the best stories in a book filled with great stories.

Mostly written by Jeff Parker, these Batman ‘66 adventures capture the spirit of the Batman television series. Parker and the artists laugh with the series and not at it. They tell dozens of enjoyable stories that are suitable for all ages. Taking advantage of the comics format, some of these tales introduce villains that weren’t yet created or weren’t yet prominent enough to have appeared on the TV show. We get Batman and Robin’s first meetings with Poison Ivy, the Scarecrow, Croc, Harley Quinn and others. We also get stories featuring the TV series villains from the most popular – Catwoman, Joker, Penguin, Riddler – to more obscure foes like the Bookworm, Marsha Queen of Diamonds, Louie the Lilac and others.

The book also includes guest writers like the deservedly legendary Mike W. Barr, who spins a great Penguin yarn. Artistic contributors include Michael Allred, Jonathan Case, Ty Templeton, Joelle Jones and many others. Since each story is complete unto itself, you can read one or two every day when you need a break from the more grim comic books of today.

I can’t recommend this book highly enough. It would make a wondrous gift for any Batman or comics reader on your holiday shopping list.  It’s my pick of the week.

I’m always on the lookout for interesting and new-to-me manga. My latest “find” was Graineliers Vol. 1 by Rihito Takarai [Yen Press; $13]. Though the creator is known for his yaoi manga, this series isn’t overtly yaoi. It’s a science fantasy of sorts, set in a world where plants and their seeds have unusual powers. The Graineliers who develop and grow these plants are the driving force behind the economies and social structures of this world.

If you’re unfamiliar with the term yaoi, it’s a genre of fiction, originating in Japan, that features romantic relationships between its male characters. However, unless there are developments coming in subsequent volumes, Graineliers doesn’t seem to fall precisely into this genre.

Luca illegally cultivates and sells rare seeds. This is a serious crime in his world that can result in imprisonment. When the “cops” come a’calling, Luca thinks they are after him. But they are after his father. Luca’s dad orders his son to flee. Luca escapes with a handful of rare and very powerful seeds, one of which he ingests. Which is a thing that happens in his world and usually with fairly dire consequences.

Luca ends up in a coma and, when he awakes, he’s Swamp Thing. No, not really, but he’s no longer quite human, no longer needs food to survive (just water) and may have powers of his own. With his best friend, he’s conscripted into service with a prominent Grainelier. Luca is fascinated by the man’s legendary skills, but there’s also a risk of his new nature being discovered.

I like the world of the Graineliers and the suspense of Luca’s new life. This first volume came out in December of last year with the second volume published in March of this year. I enjoyed the first volume enough that I want to read the second.

Graineliers is recommended to fans who enjoy the variety of genres to be found in manga. These days, I read almost as much manga as I do our traditional American comic books and graphic novels from all over the world. 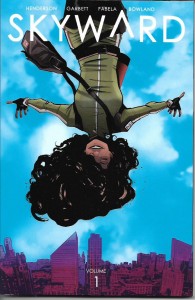 Image Comics is also justly praised for the wide variety of comics stories it presents. Skyward Volume 1: My Low-G Life by writer Joe Henderson, artist Lee Garbett and colorist Antonio Fabela [$9.99] takes place in a world where gravity suddenly weakens to the point where people and objects fly into the sky to be lost forever. It’s a world where storms float above the ground in huge masses and pose a deadly threat to anyone who enters one. It’s a frightening world, but Henderson and company go beyond the horror to show us the more matter-of-fact life of their new world.

Courier Willa Fowler is trying to find her way in this new world. She lost her mother on G-Day. Her father hasn’t left his home since that day. Dad has secrets. One of the most powerful men on Earth, a former associate of Willa’s father, wants those secrets. Willa is caught in an intrigue she had no idea existed.

Skyward has humanity and horror in equal doses. Henderson’s writing and character play is first-rate, as I might have expected from the showrunner of the great Lucifer TV series. Garbett’s art is sheer wonderment. Fabela’s colors accentuate the humanity and the wonder  well. I’m really loving this series.

Skyward is recommend to comics readers, especially those who like stories starring interesting female protagonists. This is a great time to be a comics fan.

These will be my final conventions of the year. If you’re in any of these fine cities on these weekends, I hope you’ll try to come by and see me and the other guests.