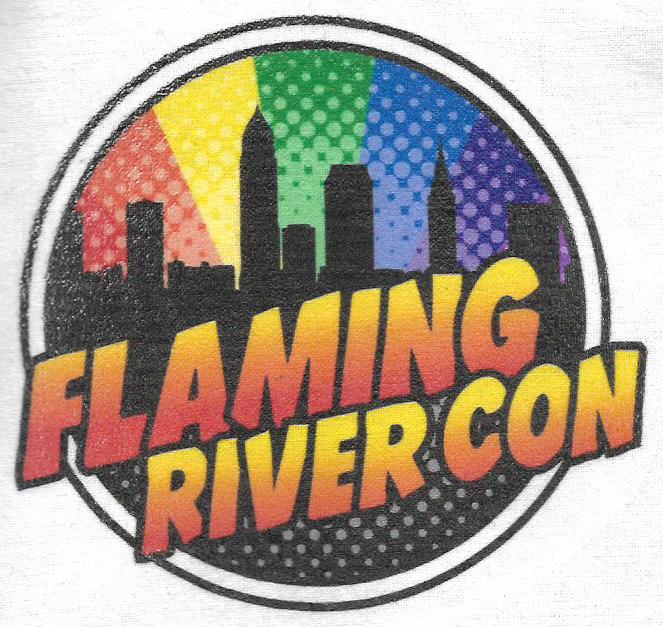 Flaming River Con was held on Saturday, September 22, at the West Shore Unitarian Universalist Church in Rocky River, Ohio. This was the first LGBTQ comics convention in the Midwest. I was not a guest of the convention, but attended to show my support for the comics and the gay community. The name “Flaming River” stems from the time the Cuyahoga River caught on fire.

This was a terrific event. Though I could only stay for a few hours – I had a binge-watching date with my daughter Kelly – I met Sina Grace, writer of Marvel’s Iceman; caught up with my Sam Maronie, my friend of many decades; and met Sam’s husband Kevin. I hope this is just the first of many such conventions to come.

When I tell people that right now is the real Golden Age of Comics and that I’m enjoying comic books more right now than I ever have in a lifetime of enjoying comic books, one of the reasons I cite is the new characters and voices coming into our art form. Despite the relatively few “on the wrong side of history” naysayers, readers are embracing the diversity represented by creators who bring their own stories to their super-hero and other comics works. Inclusion. It’s making comics better than ever.

By the way, Kelly and I binge-watched the last few episodes of The Flash. I’ve been somewhat so-so about the past season, but anything that gets me more Ralph Dibny (as played by Hartley Sawyer) is fine by me. On to this week’s reviews… 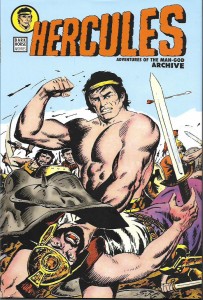 Hercules: Adventures of the Man-God Archive [Dark Horse; $49.99] collects all thirteen issues of the 1967-1969 series published by Charlton Comics. The stories were written by Joe Gill and Sergius O’Shaughnessy (aka Dennis O’Neil). The artist was the legendary Sam J. Glanzman. The title’s editors were Pat Masulli, Dick Giordano and Sal Gentile.

Charlton paid the lowest rates and printed on the cheapest paper in the comics industry. It has been reported they published comics to keep the overall company’s presses running 24/7. This combination of factors meant generally mediocre comic books, but didn’t prevent the publication of gems like Hercules.

Hercules was a sanitized version of the mythological legend, which was not surprising given the era and the then-powerful Comics Code Authority. Thus, Hercules was said to be the son of Zeus from that god’s previous marriage and the sins that led Herc to undertake his twelve labors were never described. Both Gill and O’Neil played a bit fast and loose with other aspects of the myths, but they still got most of the key points right.

Glanzman’s art was heroic and rugged where it needed to be heroic and rugged, but he could also draw in a more whimsical and almost psychedelic style when the story called for that. Between the art and dialogue that often reflected the 1960s, Hercules was perfectly acceptable to the readers of that era. I confess I laughed out loud when an exasperated Ares says to the vindictive Hera, “Gee, ma, I hate that kid!”

Hercules: Adventures of the Man-God Archive is my pick of the week. It would be a great gift to yourself or to the comics fans in your life. My sponsors here at InStock Trades are currently offering an excellent discount on the volume. Go for it! 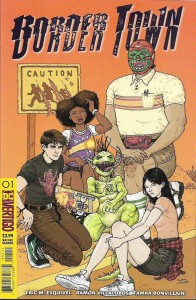 Border Town #1 [DC/Vertigo; $3.99] is fun. Yeah, I know that will sound strange to those of you familiar with the comic. I mean, it starts with racists planning to murder Mexicans crossing the border into Arizona and ups the stakes with a demon slaughtering one and all. Mexicans and racists alike. As I read further into the issue, there was more racists and demons and blood-letting. If that’s not hilarity, what is?

Seriously, writer Eric M. Esquivel has crafted a solid opening to a series about a border town. It’s not just on the border of Mexico and Arizona; it’s also on the border of our world and some sort of monster dimension.

It’s the first day at a new high school for Frank. He makes a few new friends, gets attacked by one of those new friends, makes other new friends, fights one of his old new friends and then everyone is attacked by monsters who appear as whatever they fear most. For one young child, that happens to be Bane from Batman comics and movies. This is satire that has much to say about the state of our nation as empowered racists try to slow their inevitable sweeping into the dustbin of history. It’s fun with purpose. 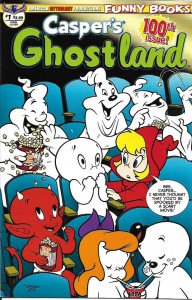 Casper’s Ghostland #1 [American Mythology Productions; $3.99] marks the 100th issue of the title. There were 98 issues in the original run (1958-1979) with a one-shot in 1992. There are two new stories and several pages of short reprint gags and stories. The main cover for the issue and the interior art for the new stories are by Eric Shanower. Very nice work.

In Mike Wolfer’s “From Bad to Curse,” Casper visits Hot Stuff (the Little Devil) in the Enchanted Forest where he is startled to hear all the animals cussing. Even Hot Stuff, no stranger to that kind of language, is surprised. The source of the rude language and the solution to the cussing epidemic are clever components of the tale. While definitely reminiscent of the old Casper stories, this one is much more contemporary. Not to worry, the cussing is represented by that comic-book standby, “@#&!#@” and similar phrasing.

In Pat Shand’s “Blow Off Some Scream,” Casper tries to help Spooky when the Tuff Little Ghost has a falling out with girlfriend Pearl. As with Wolfer’s story, this adds some contemporary touches to the classic characters.

These are followed by a selection of one-to-three-page reprint gag stories staring Nightmare, Wendy the Good Little Witch and Spooky. All are pleasant fun.

Casper is a great character and this is a perfectly readable comic book. Yet I think American Mythology could do a lot more with the friendly ghost. Without losing any of the charm or inventiveness I associated with Casper as a young reader, they could make him even more contemporary. We live in a world as strange, sometimes scarily so, as the Enchanted Forest. Maybe I should take a swing at Casper or a character like him soon.