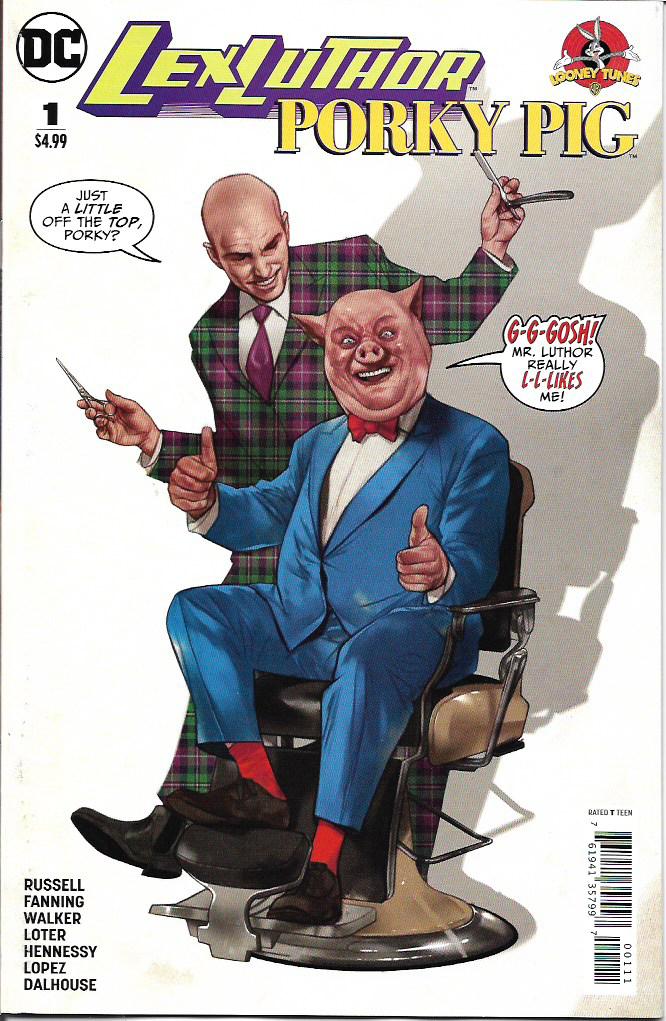 I’m back from a whirlwind week in Los Angeles where I hung out with dear old friends like Maggie Thompson and Mark Evanier; shopped at the amazing Galco’s Soda Pop Stop; visited DC Comics and talked about possible future projects; had lunch at a Thai restaurant with Elliot S! Maggin, Ken Penders and Larry Houston; saw BlackkKlansman (which I recommend highly); had lunch at the Magic Castle; went to Long Beach for dinner with my goddaughter Vanessa; and attended a memorial party for my friend and sometimes mentor Harlan Ellison. If I started dropping names of the amazing people who were at the party, there wouldn’t be room for the comic-book reviews this week.

The DC Comics and Looney Tunes mash-ups have been weird wonderful fun. Lex Luthor/Porky Pig #1 [$4.99] is no exception. Written by Mark Russell, whose The Flintstones was one of my favorite comics in recent memory with art by Brad Walker (pencils), Andrew Hennessy (inks) and Andrew Dalhouse, the lead story gives us a Porky who was an huge success in the crypto currency business until he crashed and burned. Hired by Lex to run his company’s social media efforts, Porky doesn’t realize Luthor’s platform exists to steal information from users. That will cost him.

Russell also takes some shots at pharmaceutical companies who raise their rates on life-saving drugs. The greedy CEOs? Doctor Sivana and Professor Ivo.

The second shorter story is “Lex’s Next Appointment” and is told in a more traditional animated style by writer Jim Fanning, penciller John Loter and inker/colorist Paul J. Lopez. Porky is an office supplier salesman calling on LexCorp. Hilarity ensures.

Lex Luthor/Porky Pig is my pick of the week. Look for it wherever marvelously insane comic books are found. 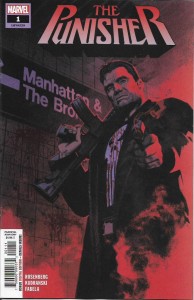 Marvel has published a new The Punisher #1 [$4.99], though if you look closely at the brand box in the upper left corner, you’ll see it is also [Legacy] #229. As the handy “what has gone before” title and credits page informs us after relating Frank Castle’s origin, the Punisher was duped by the evil Steve Rogers during the absurd “Secret Empire” event and now seeks revenge on Hydra for his butt-hurt feelings. Oh, yeah, and he no longer has the War Machine armor he was flying around in before this new first issue.

Matt Rosenberg, a good writer, is the writer of this new “World War Frank” story arc. It is drawn by Szymon Kudranski with colors by Antonio Fabela. I don’t consider the Punisher a hero, but wanted to like this first chapter more than I did.

Castle is portrayed as a silent killer throughout the issue. Which takes away something important to him and other Marvel characters. They have personalities.

The storytelling is less than adequate to the story. The action is not clear. The faces of the villains are not dissimilar enough to make their identities clear. Baron Zemo’s mask distinguishes him; the Mandarin just looks like another guy and, for that matter, not too different from Tony Stark, who also appears. The issue does deliver what could be a major development, assuming it isn’t undone before the end of the arc.

I’ve been a fan of Hydra since they were introduced, as witness my being about the only Marvel writer using them in the mid-1970s. So I applaud seeing some of those groovy green outfits. Still, I will need to see something better than this first issue to become truly invested in Castle’s war against Hydra. I’ll keep reading in hope of seeing that, but I can’t honestly recommend this series to you at this point. Buyer beware. 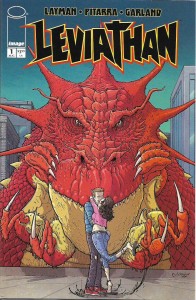 As the pastor of the First Church of Godzilla on Facebook, there’s no way I would pass on Leviathan #1 by John Layman and Nick Pitarra [Image; $3.99]. Kaiju terror comes to the big city when things get out of hand at a party and the partygoers seem to summon a dragon of biblical proportions.

Protagonist Ryan Deluca, the host of the party is on a beer run, at the time. His apartment building and his girlfriend Vee Monroe is in the path of the creature. His rescue of her takes an unexpected turn, even as the United States and its Japanese allies prepare to unleash some specialized weaponry against the monster.

Layman has long been one of my favorite writers. Pitarra is a fine artist. Colorist Michael Garland knocks it out of the park with his hues. However…I’m going to take a “wait and see” position on this series. There is good stuff in this inaugural issue, but the story hasn’t quite come together yet.

Kaiju completists like me will want this issue, but I’m not ready to recommend it to non-believers. I’ll keep reading and revisit the title in a few months.

My next convention appearance will be at the Baltimore Comic*Con, Friday through Sunday, September 28-30, at The Baltimore Convention Center. The media guests are Mike Colter (Luke Cage), Wil Wheaton (Star Trek: The Next Generation, The Big Bang Theory) and Zachary Levi (Shazam!). This will be Levi’s only North American signing event in 2018 and your only chance to meet him.

The comics guest list is amazing. The event has literally dozens upon dozens of name creators from Art Adams to Mike Zeck. This is my first time at the convention and I’m already wondering how I’ll find the name to chat even briefly with my many friends who are on the guest list.

One old friend I know I’ll be chatting with is Bob Greenberger, my former editor on DC’s Star Trek. He’ll be moderating Sunday’s “Tony Isabella Spotlight” presentation in rooms 347-348 from 1:30 to 2:30 pm. I’ll also be spending as much time as possible at my table, so please, if you’re coming to the convention, come and say “hi.” I’ll be happy to sign your Isabella-written stuff for a nominal fee or sell you Isabella-written stuff I have on hand or just answer your questions on this and that.

If you can’t attend the Baltimore Comic*Con, don’t fret. I will be back here next week with more reviews.