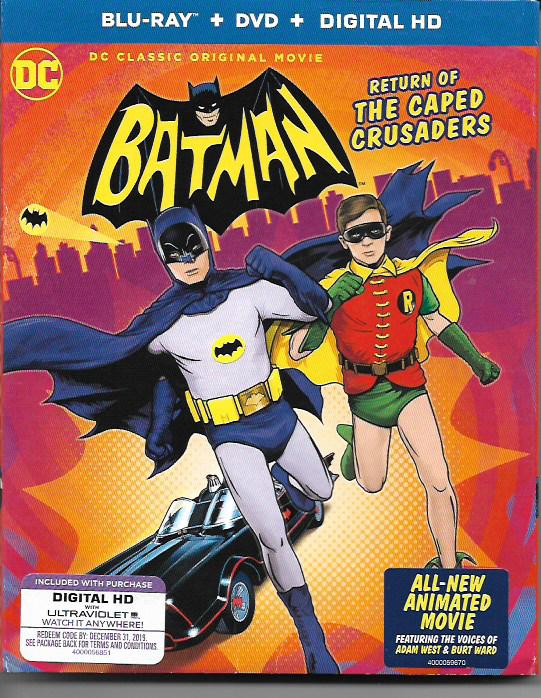 When I was a youngster, Batman was my favorite super-hero.  It was the George Reeves Superman on TV that introduced me to the genre, but, once I started buying comic books, it was the Caped Crusader all the way.

Before I decided I wanted to write comics, I wanted to be Batman. Even if my parents were not wealthy and hadn’t been gunned down in an alley, I figured that, with dedication and work, I could be the Batman.

I was even training myself. I had this shoe box containing weather maps I’d clipped from the newspapers and envelopes filled with dirt samples from around our neighborhood. If the bully down the street committed a crime and left dirt behind, I would be able to prove it came from his yard. I don’t know what happened to that crime-lab in a shoe box. I’d like to think it’ll turn up someday and completely confound whoever finds it.

When Batman debuted on TV, I was insulted by the series playing my hero for laughs. But I still watched every episode and went to the  movie that came out that summer. It was only in the past decade or so that I came to appreciate that the series is fun and, in so many ways, faithful to Batman and his comic-book mythos.

Batman: Return of the Caped Crusaders (2016) reunited three of the original cast members of the TV show: Adam West, Burt Ward and the always glorious Julie Newmar. The animated feature was directed by Rick Morales from a screenplay by Michael Jelenic and James Tucker. With a deliciously cold Pepsi Wild Cherry, a big bowl of popcorn, and my cat Simba showing a mild interest whenever Newmar spoke, I was ready to be entertained and even delighted.

From the Internet Movie Database summary:

Batman and Robin spring into action when Gotham City is threatened by Penguin, The Joker, Riddler and Catwoman. This time, the four super villains have combined their wicked talents to hatch a plot so nefarious that the Dynamic Duo really have their hands full.

So it’s a kind of sort of the sequel to the 1966 live-action movie.

There’s even a nod to movie Catwoman Lee Meriwether and alternate TV Catwoman Eartha Kitt when a drugged Batman sees three different Catwomen. As if that were a bad thing.

The villains steal a “diabolical” replica gun that creates endless counterparts of anything, including human beings. Batman and Robin capture the three male villains, but, as a result of the drug that he was exposed to, Batman becomes a super-control-freak. He makes countless duplicates of himself and pretty much takes over Gotham City, firing Commissioner Gordon, Chief O’Hara, the mayor, a judge and so on. He becomes more brutal and seems likely to start killing people if this continues. A reluctant Robin teams up with Catwoman, who was betrayed and nearly killed by the other villains, to try to set Batman to rights.

Return of the Caped Crusaders is a split-personality movie. For the first half of the movie, it’s almost a beat-by-beat episode of the TV series without the wink-wink charm of the original. The second half gets surprisingly and uncomfortably dark.

The voice-action is pretty good, but it takes West and Ward a few scenes to get back into the rhythm of their former roles. Newmar is amazing from the start. The other performers are okay, but I can’t say there are any stand-outs among them.

The bottom line? Keep your expectations on the low side and you’ll enjoy this movie. It’s fun. It has crazy sound effects. It has over a dozen other Bat-villains making appearances. It has all sorts of “in” jokes, enough that I’m going to watch the movie again to see if I can catch them all the second time around.

Batman: Return of the Caped Crusaders was worth the ten bucks that I paid for it and the time I spent watching it. I recommend to all Bat-fans who have come to terms with the 1960s TV series. 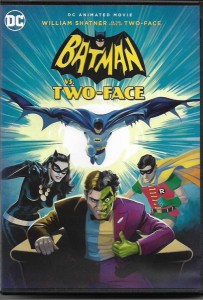 Batman vs. Two-Face (2017) is a better animated feature than Return of the Caped Crusaders. West, Ward and Newmar all return. We get a major bonus in William Shatner as Harvey Dent/Two-Face and a cool  cameo by Lee Meriwether as prison psychiatrist Lucilee Diamond. We also get Professor Hugo Strange [Jim Ward] and Dr. Quinzel [Sirena Irwin]. Director Morales and writers Jelenic and Tucker also return for this movie. Here’s the IMDb summary:

Gotham City D.A. Harvey Dent is mutilated in a laboratory accident. When the duplicitous Two-Face embarks on a crime spree, Batman and Robin must solve the mystery of his identity while facing off against several other foes.

Strange has invented a device to extract evil from criminals like the Joker, the Riddler and the Penguin. When the experiment takes a bad turn, Dent is exposed to the essence of evil or whatever you want to call it and becomes Two-Face. Obviously, the cartoon opted to forgo the more grisly Two-Face origin from the comic books and other versions. This also allows for other people to experience the same transformation.

Dent is arrested, sentenced, cured, rehabilitated and, incredibly, allowed to be an assistant district attorney. Robin/Dick Grayson is not buying it, which causes a rift between Batman and his partner. This is well played.

Even better played is the jailhouse romance of Batman and Catwoman. It’s corny. It’s sweet. It fits the 1960s demeanor of this feature. Alas, this movie is the last time we’ll know the joy of hearing the Batman voiced by West. He is missed.

Batman Vs. Two-Face is a big fun in 72 minutes. Watch it closely. You’ll see nods to all sorts of geeky things. There are even scenes lifted from Silver Age comic books. It’s my pick of the week.

One before we call it a column. From Amazon, you can now get both Batman vs. Two-Face and Batman: Return of the Caped Crusaders for around ten bucks in a two-film collection. Both animated films are also available on Amazon Prime.

I’m on my way to Los Angeles for several days, but I’ll return next week with more reviews. See you then.