I was delighted to see Back Issue #107 [TwoMorrows; $8.95] devoted its September 2018 issue to Archie Comics. Not the modern versions that, as regular readers of this column know, leave me cold. Nope. Editor Michael Eury’s topic for this latest issue is “From the groovy ‘70s through the big ‘80s, Archie Comics in the Bronze Age!” The issue went immediately to the top of my reading pile.

Although Archie Comics didn’t always get credit for its attempts to expand its characters and its impact in the comics marketplace, the company did a lot of interesting things during those two decades. I used to talk to the late Michael Silberkleit a bit back then and, even when we disagreed, I thought he was a smart cookie. It’s sad I never got to do a full-on interview with him.

The line-up of subjects and writers in this issue is spectacular. Jack Abramowitz kicks things off with a wonderful overview. There are Jerry Boyd interviews with Stan Goldberg and George Gladir, who were exceedingly kind to me. Gladir gave me rare issues of Bats and other comics for my 1000 Comic Books You Must Read. I was working on a new comic-book series tailored for Goldberg at the time of his passing. I want to return to it soon, but where will I ever find anyone as perfect for it as Stan?

Steven Thompson has a fun article about the various Archie clones published by other comics companies. Kurt Heitmueller, Jr. does a two-page strip about his love of Archie comics. There are articles about Sabrina the Teenage Witch (Christopher Larochelle), Archies on television (the amazing Andy Mangels), That Wilkin Boy (Mark Arnold), Red Circle Sorcery (Ed Catto), Red Circle Superheroes (Steven Wilber), Cheryl Blossom (Jerry Smith) and a neat collection of rare artwork curated by Boyd. Indeed, my only quibble with Back Issue is that I want to see writers credited for their articles on the contents page and not just in the “special thanks” section. I have favorite Back Issue writers and would love to be able to go to their articles first.

Back Issue #107 is my pick of the week. If Archie Comics ever gets away from dark and largely lacking in humor soap-opera, I’d love to be a part of that movement. You can move forward without abandoning the core values of these classic characters. 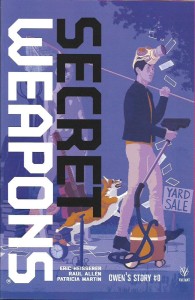 Since I’m not the kind of comics reader who goes to a comics store every Wednesday, picks up the new releases and immediately goes home to read them, I seldom review individual issues here. Still, every now and then, one of those issues tickles my fancy and makes me want to share it with out.

Secret Weapons: Owen’s Story #1 [Valiant; $3.99] focus on Owen Cho, a psiot whose power doesn’t seem particularly useful. Owen conjures objects out of nothingness, but he has no control over what kind of object he conjures or even when it will materialize. It’s the super-powered equivalent of the mystery boxes sold at comics conventions. He never knows what he’s going to get.

In a fun story by writer Eric Heisserer with art by Raul Allen and Patricia Martin, Owen’s life and power are closely examined. While I don’t want to give away too much, let’s just say there might be a method of sorts to this madness.

Valiant published a nice bunch of titles every month. The universe of these titles keeps growing, but the writers do an excellent job keeping readers old and new in the storytelling loop. I enjoy them quite a bit. If you have found other comics universes not to your liking, I recommend you give the Valiant titles a shot. 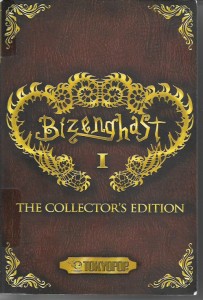 I’ve been reading a great deal of manga lately, looking for series to replace some recently-concluded favorites. One that caught my eye was Bizenghast: The Collector’s Edition Volume I by M. Alice LeGrow [Tokyopop; $19.99]. It’s a gothic adventure drama series. I got this volume, which collects the first three books in the seven-volume series through my local library system and it hooked me early on.

Fifteen-year old Dinah Wherever’s parents were killed in an accident and now she lives with her aunt in a haunted estate that includes a former hospital and a former boarding house. Both her aunt and her doctor believe Dinah is schizophrenic. But the grounds are, indeed, haunted. Dinah has been charged with freeing the ghosts who linger there. If she fails, she will remain there forever. Assisting her in this calling is Vincent, her only friend.

The characters and stories are intriguing. Before long, some other supernatural creatures show up to help Dinah. The perils of what she must do grow with each new adventure.

LeGrow’s art is gothic Lolita. The storytelling is a little rough in places – this is her first comics work – but I’ve been enjoying this series. Though this first collectors edition might be difficult to track down, it’s worth the effort. 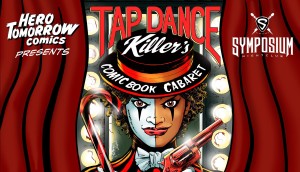 My next public appearance will be a first for me. I will be doing a reading from my Black Lightning: Cold Dead Hands mini-series in a nightclub setting. If you’re going to be in the Cleveland area on Saturday evening, September 1, think about coming to this event:

Hero Tomorrow Comics is throwing a loving farewell for the Phantasy complex featuring a vaudeville show of rock and theatre performers, dancers, poets, and comic book writers! It’ll be a night like you’ve never seen!

Yeah, this is a little out there for me. But, barreling towards 67, I remain committed to trying new things, spreading my “brand” far and wide and always, always going forward.