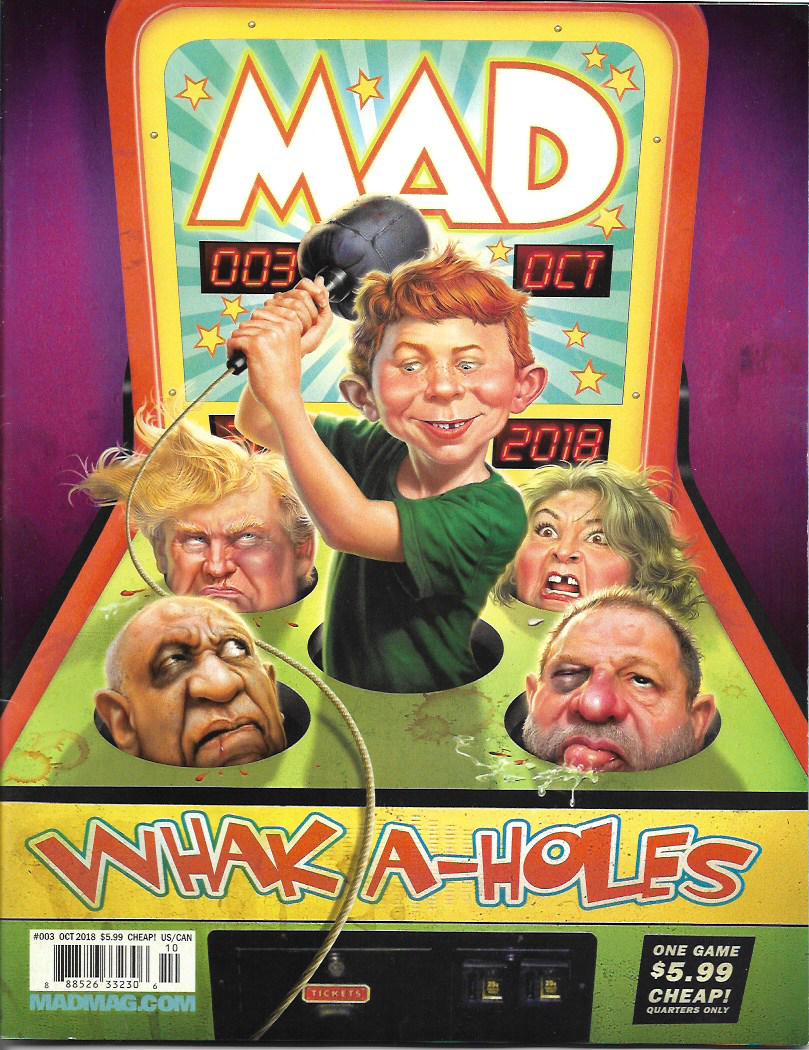 We’re three issues into the “new” MAD [E.C. Publications; $5.99 per issue]. That strikes me as a reasonable sampling to assess how the legendary humor magazine has and hasn’t changed.

Mark Fredrickson’s cover for the third issue is fairly brutal. I do  quibble at the inclusion of Roseanne Barr. Yes, she’s awful. But,  unlike the others, she’s not, to the best of my knowledge, a serial sexual predator. If the left-leaning politics are more noticeable in MAD these days – and I admit they are – is because the Dumpster gives them so much to work with.

The MAD movie and/or TV parodies are still a monthly feature. This issue’s “Messy Layered One” by writer Desmond Devlin and artist Tom Richmond was entertaining…and I haven’t even seen the movie that it was mocking.

The writers are a mix of old faithfuls like Dick DeBartolo and new folks like Tammy Golden, who, with artist Jon Adams, has revived the classic Dave Berg “The Lighter Side Of…” feature. It’s not up to Berg’s standards, but it was good enough that I’d like to see it again become a regular part of MAD.

“Spy Vs. Spy” – or this issue’s, “Spy Vs. Spy Vs. Spy” isn’t doing much for me lately. I’m a fan of Peter Kuper’s work but it’s harder to laugh at espionage humor when our highest elected official is a Russian agent.

I’m loving “Potrzebie Comics” a lot. “Infant Terrible” by writers Paula Sevenbergen and Allie Goertz with art by Pauline Ganucheau is a gem. Kerry Callen’s “The Origin of Spidery-Man” was excellent. I am on the fence when it comes to Bob Fingerman’s “Boonies Burbs and Burgs” which is sometimes more gross than funny.

Along with the usual great contributions by Sergio Aragones and the Al Jaffee fold-in – both never cease to amaze me – there’s a nice tribute to the late Nick Meglan in the issue.

MAD remains what it ever has been. It has some brilliant material. It has some material that bombs. It has decent material in between those two extremes. It’s still a great magazine, one to which I am delighted to subscribe. It’s my pick of the week. If you want to imagine me pulling a dripping copy of MAD out of my nose, feel free to do so. Because, you know, it’s MAD. 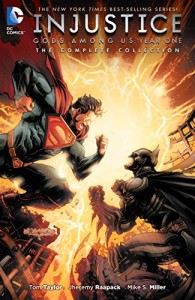 Turning super-heroes dark has become as much as a cliche as those pure-as-angels champions who dominated the 1950s and 1960s. As someone who believes the genre is essentially an optimistic one, twisting classic characters into dark versions of themselves does not appeal to me. However, sometimes good writing can hook me into enjoying even the darkest of super-hero comics.

You probably know the starting point of Injustice, but I’ll avoid any spoilers beyond this: Superman suffers a terrible loss at the hands of an iconic villain. His response is extreme, leading to his decision to save the world by dominating it. Some heroes join him. Others oppose him.

Taylor is the star here. He makes a convincing case for Superman’s renunciation of his previous moral code. That Superman doesn’t see it that way is part of what makes the story convincing. Almost all of the other heroes and villains are much like their traditional selves, but twisted into non-traditional actions. Even if Injustice didn’t feature a take on Black Lightning that mostly works for me, I think I would want this book for my collection. I know I will be checking out the succeeding volumes.

With the cautionary note that this collection does contain graphic violence, I recommend it to older readers. 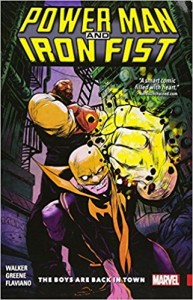 Catching up on my reading, Power Man and Iron Fist Vol. 1: The Boys are Back in Town by David F. Walker with artists Sanford Greene and Flaviano [Marvel; $15.99] was a hoot-and-a-half. Collecting Power Man and Iron Fist #1-5 from 2016, it’s just your basic fun “buddy book” with Luke and Danny getting back together to help out an old friend. Unfortunately, that old friend is playing them.

This book has Luke and Danny getting together to help their former secretary Jennie, released from prison for a crime she committed while possessed. She asks them to retrieve a family heirloom from crime-boss Tombstone. Except it’s actually a mystic amulet. With which Jennie and her former cellmate Black Mariah plan to use for their own gain.

The book is equal parts action and comedy. Jennie’s new powers make her a formidable foe. Tombstone sends various goons after Luke and Danny. Jessica Jones (Luke’s wife and the mother of their child) keeps making fun of him for teaming up with Danny once again. Danny  keeps asking Luke why Jessica hates him. We get heroes and villains as guest stars. There’s a nice parallel between the bond that ties Jennie and Mariah and the continuing bromance of the former Heroes for Hire. I was grinning most of the time I was reading this book with the occasional laugh-out-loud moments.

Is it a classic collection? No, but it’s a thoroughly entertaining volume and that’s plenty good for me. Check it out.