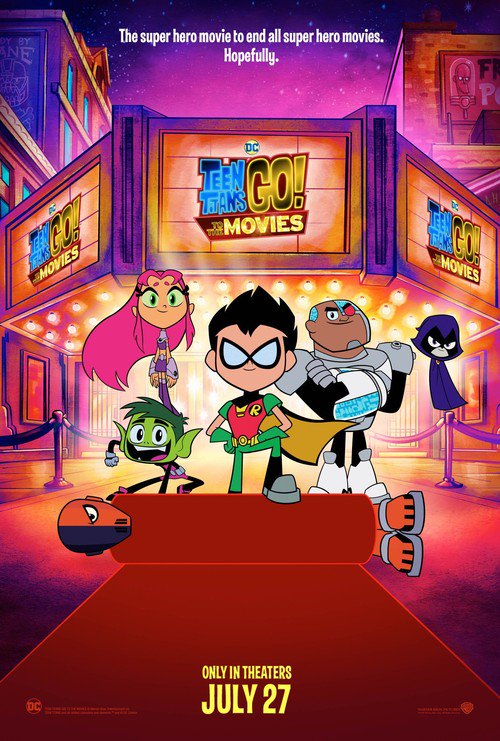 I took an extended lunch break one day last week, going to my local multiplex movie theater for an early showing of Teen Titans Go! To the Movies. This was my reward to myself for completing a somewhat challenging comics script. This was a delightful experience on so many levels that I knew I’d have to write about it.

I’m going to eschew the spoiler warnings because I don’t need them to do this animated feature justice. In fact, the only spoiler in this week’s “Tony’s Tips” column is in the Internet Movie Database synopsis of the movie:

This will ramble a bit because I want to share that fun afternoon with you. As I said, I went to an early showing figuring I’d grab lunch at the Regal Stadium 16 in Medina, Ohio. The t-shirt I wore had the Black Lightning logo from the TV series. The guy at the refreshment stand saw my shirt and excitedly asked:

“Do you know the guy who created Black Lightning lives right here in Medina?”

I confessed that I did know this and added:

The guy showed me his own art on his phone. I gave him some quick advice and then ordered what turned out to be a very tasty pizza. That was another pleasant surprise.

The individual theater showing the movie was almost empty. Besides me, there was a young woman with four kids. I got a kick out of how excited they were and how much they enjoyed the film. I enjoyed it as much or more than they did.

Robin and his team are miffed they aren’t on the guest list for the premiere of a new Batman movie. How they get seats at this showing is one of the best gags of the feature.

Robin is humiliated by the disrespect shown him. He dreams of being the star of his own movie. His teammates try to bolster his self-esteem in ways both heartwarming and hilarious. There’s some real heart and soul to this movie, deftly mixed in with the crazy humor and the occasional musical number.

I’m not going to give away of the gags. Some of them are aimed at older viewers. Some had me laughing out loud. The movie as a whole was incredibly inviting to most longtime comics readers like me and to the youngsters who probably only know these characters from the cartoons and movies and TV shows. We got a very satisfying ending, which made me love the film even more.

Kudos to writers Michael Jelenic and Aaron Horvath for a smart and funny script. Kudos to directors Horvath and Peter Rida Michail. Kudos to the great Teen Titans voice actors –  Greg Cipes, Scott Menville, Khary Payton, Tara Strong and Hynden Walch – and to all the fantastic guest voice actors. To the actor who also played a certain flame-headed motorcyclist of my acquaintance, I’m so happy you got to fulfill one of your dreams in this movie.

Teen Titans Go! To the Movies is my pick of the week. Starting in 2019, the Eisner Awards should start honoring comics-based movies and TV shows. This animated feature should be the first nominated, followed by Ant-Man and the Wasp, Black Lightning, Black Panther, Lucifer and Luke Cage. 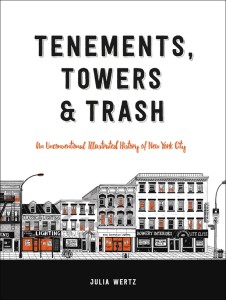 Tenements, Towers & Trash: An Unconventional Illustrated History of New York City by Julia Wertz [Black Dog & Leventhal; $29.99] was a New York Times Notable Book of 2017. Based on Wertz’s columns for  The New Yorker and Harper’s, it combines comics storytelling with meticulous drawings of buildings, streets and all the architectural vibrancy that mark past and present-day New York.

This 284-page tome is perfect for displaying on your coffee table and picking up whenever you’re in the mood for a charming lesson on the Big Apple. Wertz makes much of this history personal. It made me wish I was with her on her exploratory walks around the city she called home for many years. Here and there, when she draw a part of the city I knew from my much shorter time there, I felt a yearning to see those places again.

The book is just plain gorgeous. I could look at it for hours and re-read some parts of it again and again. I think it would make an outstanding gift for someone you love who lives in New York City or who has lived in New York City or who wishes they could live or, at least, visit New York City for an extended time. It makes me want to arrange my schedule to spend a couple weeks in my old hood. What would it be like to be writing and making deadlines in the same area where I wrote so many of my Marvel and DC Comics stories? But I digress. 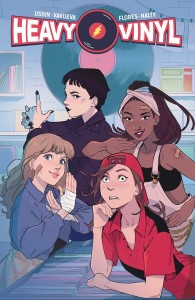 Heavy Vinyl by Carly Usdin, Nina Vakueva, Irene Flores and Rebecca Nalty [BOOM! Box; $14.99] is a collection of the first four issues of the comic book, though the first three issues went by the name Hi-Fi Fight Club. This isn’t a book for which I have much affinity, which won’t stop me from recommending it here. Not every comic book has to be tailored for me.

When Chris joins the staff at her local record store, she’s surprised to find out that her co-workers share a secret: they’re all members of a secret fight club that take on the patriarchy and fight crime!

Starry-eyed Chris has just started the dream job every outcast kid in town wants: working at Vinyl Mayhem. It’s as rad as she imagined; her boss is BOSS, her co-workers spend their time arguing over music, pushing against the patriarchy, and endlessly trying to form a band. When Rosie Riot, the staff’s favorite singer, mysteriously vanishes the night before her band’s show, Chris discovers her co-workers are doing more than just sorting vinyl. Her local indie record store is also a front for a teen girl vigilante fight club!

Follow writer Carly Usdin (director of Suicide Kale) and artist Nina Vakueva (Lilith’s World) into Heavy Vinyl, where they deliver a rock and roll tale of intrigue and boundless friendship.

The music background didn’t do anything for me, but that’s on me. As I get older, I don’t listen to music while I’m writing. If it’s in English, it’s too distracting. When I do listen to music, it’s instrumental, Japanese or salsa. Go figure.

The characters are likeable, the writing is good, the art is good. The back-issue blurb about this story showing “that girls can be both smart and tough” got a snort out of me because there are now a few dozen comics that do the same thing. Yes, Heavy Vinyl is one of those comics, but it’s far from alone in this welcome change to the comics industry.

Basically, Heavy Vinyl isn’t my thing, but I can recognize it as a quality comic book and realize that a great many readers will like it better than I did. If this mention puts those readers together with this book, I’ll be delighted.