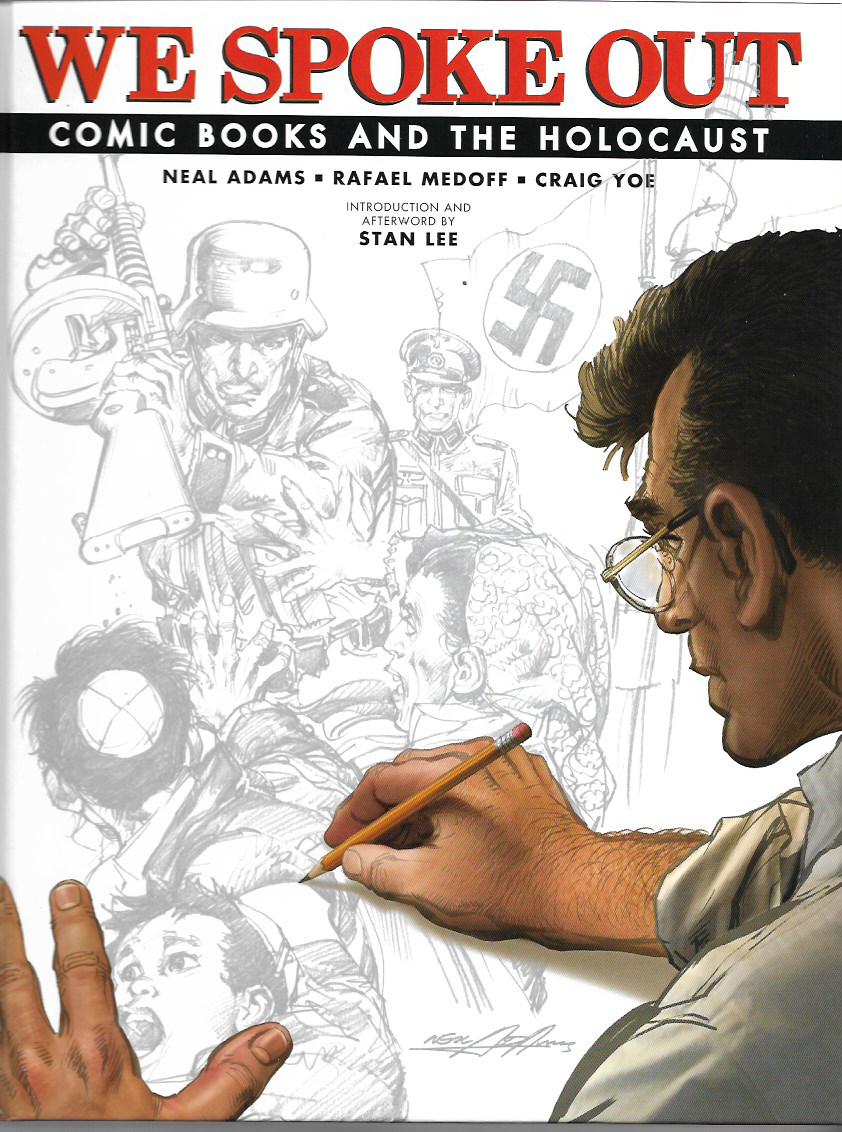 Comic-Con International 2018 is in the record books. It will take me a few weeks to digest the news that came out of San Diego last weekend, but I can make some predictions.

We Spoke Out: Comic Books and the Holocaust by Neal Adams, Rafael Medoff and Craig Yoe [Yoe Books; $49.99] gathers together eighteen classic comic-book stories about or concerning the Holocaust. This important book becomes all the more so at a time when the shadows of the Nazi scourge have not only resurfaced and spread across the world, but cast their unthinkable horror into the very White House that once stood so resolutely against them.

The book starts with introductions by Stan Lee, Adams, Medoff and Yoe. From there, it reprints Al Feldstein’s and Bernard Krigstein’s “Master Race,” one of the first comics stories to shine a light on the Nazi death camps and still powerful over six decades after its initial publication.

The other seventeen stories were originally printed in war comics, horror comics and super-hero comics like Captain Marvel, Batman, Captain America and Uncanny X-Men. I was especially gratified that “The Duty of Man” by Chris Claremont and George Evans was included in this anthology. It is a strikingly strong work that appeared in War is Hell, the series I created for Marvel Comics in the 1970s, and which I turned over to Chris because I felt he would do a much better job with the concept. Which he did.

The final comics story in the book is “The Last Outrage” by Medoff and Adams. Published in X-Men: Magneto Testament #5 from 2008, it is a non-Marvel Universe story about the struggle of painter Dina Babbitt to recover paintings she did under coercion while she was a prisoner in Auschwitz. Those paintings how hang in the Auschwitz Museum. The museum refused to return these paintings to the since-passed Babbitt and refuses to return them to her surviving family. The museum once made the outrageous claim that the paintings were the property of the Nazi who forced Babbitt to paint them to save her life and that of her mother. That Nazi was Dr. Josef Mengele. In a few gripping pages, Medoff and Adams expose the vileness that was the backdrop of these paintings and the modern-day vileness of the museum’s refusal to return them to Babbitt’s family. 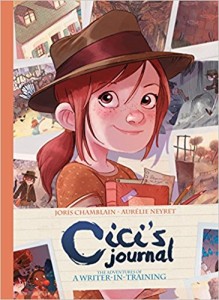 Cici’s Journal: The Adventures of a Writer-in-Training, written by  by Joris Chamblain and illustrated by Aurélie Neyret [First Second; $17.99] is a charming French graphic novel about a young girl who dreams of being a novelist. She keeps a journal, she observes the people she sees around her. When any of those people are something of a mystery, well, the game is afoot.

Cici is dedicated in her quest for answers to these mysteries, but that dedication often leads her to treating her friends and mother badly. She gets so focused that she fails to realize the people in her life are not there simply to support her story. They all have lives and needs of their own. This is pretty heady stuff for a book aimed at readers under the age of 13.

The mysteries are fascinating. The first of the two stories in the book concerns a mysterious man, his coat spattered with paint, who Cici spots in the forest where her friends and her are building a secret fort. The second story involves an elderly woman who checks out the same book from the town library every week. The development and resolutions of these stories are clever and satisfying, as is the growth we see in Cici.

I love this graphic novel. I’m amazed it didn’t win a whole bunch of awards. It would make a great gift for any pre-teen child, but especially for girls. It should be in public and school libraries. Though aimed at younger readers, this doddering old man enjoyed it immensely. You should check it out. 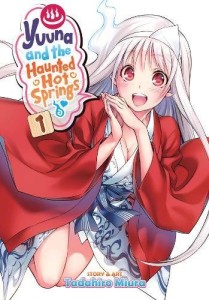 Assassination Classroom and Princess Jellyfish are two of my most favorite manga series. Having finished reading both of them, I have been looking around for another manga series with which I can fall hopeless in love. Unfortunately, Yuuna and the Haunted Hot Springs by Tadahiro Miura [Ghost Ship; $12.99] isn’t going to be that manga series. This despite having a cool premise:

Homeless and haunted by ghosts, high schooler Kogarashi thinks his luck has finally turned when he finds Yuragi-sou-a cheap boarding house that was formerly a hot springs inn, now full of super sexy, scantily clad female tenants. If Kogarashi can use his spirit abilities to banish the ghost that haunts the inn, he can even live there rent-free! But when the ghost, a beautiful teenage girl named Yuuna, appears before him, Kogarashi takes pity on her and is suddenly not so sure about the exorcism. Will he help save Yuuna from becoming an evil spirit? And what supernatural secrets do the other boarders hold?

What keeps me from embracing Yuuna and the Haunted Hot Springs is the plethora of salacious – albeit “R” rated at worst – images of beautiful young woman, some of them yokai, flashing their breasts, butts, panties and other undergarments. The style of Miura’s art is such that the characters don’t always appear to be of legal age. I find that problematic, even though it’s an established tradition in manga. I’m on the fence as to whether or not I’ll read the series past the first volume.

A live-action and somewhat more discreet version of Yuuna and the Haunted Hot Springs could make for a fun movie. Such mildly raunchy teen comedies are part of our American movie tradition. But, in its current manga form, the series is troubling.