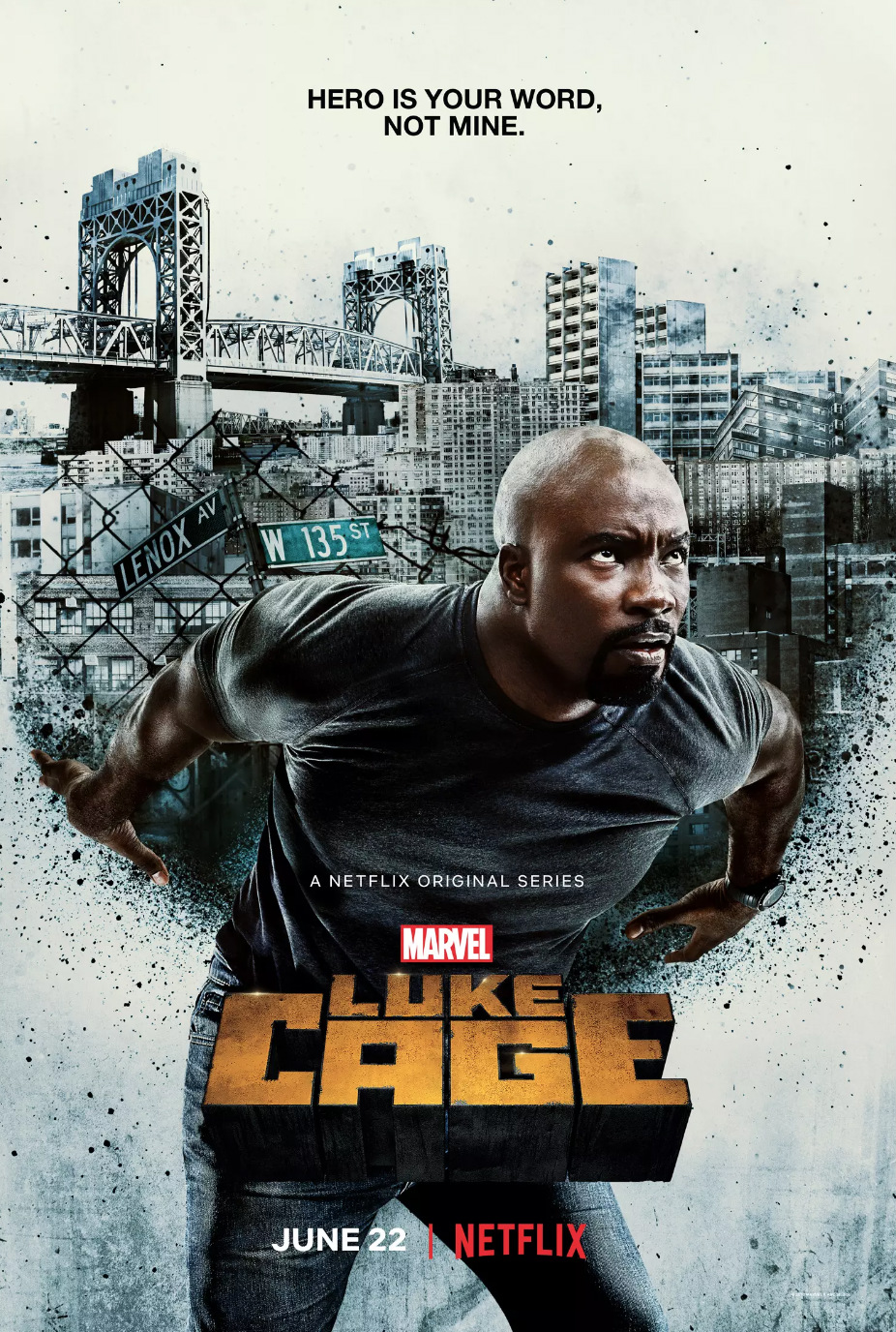 I’m writing this the day after I attended a special Marvel Comics screening of the first two episodes of Luke Cage Season Two. It was a wonderful event, made all the more so by the presence of Don and Marsha McGregor, the Marcus McLaurin family, and the families of Rich Buckler, Archie Goodwin, Billy Graham and George Tuska. Not to slight our honorable hosts: David Bogart, Tom Brevoort and Brian Overton.

I am best known for my work on Black Lightning at DC Comics and I mean no slight to the fine folks there when I say Marvel has always kept its agreements with me and, since the dawning of the company’s cinematic and television empires, with great respect. They’ve made me feel like I’m still part of the Marvel family.

Since Luke Cage Season Two dropped last Friday, I’m guessing many of you have already seen the entire season. It’ll be a while before I can do the same. But I do have some quick thoughts on the pair of episodes I have seen.

Luke is dealing with his new fame as he continues to fight the good fight in Harlem. It’s not an easy thing for him and it puts him at odds with some of those closest to him. Adding to his difficulties, his estranged father has turned up. Mike Colton continues to give Emmy-worthy performances as Cage.

Misty Knight, played by the transcendent Simone Messick, is giving her own Emmy-worthy performances as her character deals with losing an arm. While I’m looking forward to Misty getting her bionic arm as much as anyone, I applaud the show’s restraint in holding off on that for a while. Messick is killing it.

What else? New scary situations. New scary villains. Music that is the second best of any TV series I’m watching. The first is still Black Lightning. Sorry, Luke.

If you didn’t want the first season of Luke Cage, you need do that as soon as possible. Then, properly entertained and impressed, you can move on to the second season.

Luke Cage Season Two’s first two episodes are my undisputed picks of the week. I’ll have more to say about the second season when I re-watch those episodes and then the rest of the season. 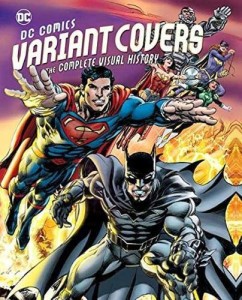 I described DC Comics Variant Covers: The Complete Visual History by Daniel Wallace [Insight Editions; $45] as being such a gorgeous coffee table book that it made me want to buy a new coffee table to put it on. But, though it has its many charms, it’s got a word in its title that makes me wince.

There are dozens of great cover reproductions in this 11 by 14-inch book. Some of the best artists in comics. Some of the most dynamic images. Some of the funniest gags. However…it is, by no means, a complete visual history. We don’t get every variant cover, just a generous sampling thereof.

For the most part, Wallace offers a decent history of DC’s variant covers. Yet he never mentions some of DC’s earliest variant covers, such as the one done for Justice League #3 [July, 1983] as a test market for newsstand sales. The book also lacks a checklist of the DC variant covers.

If Wallace had replaced the word “complete” with “a,” I wouldn’t be dismayed by this otherwise fun book. When books have “complete” or “encyclopedia” in the titles, the reader has a right to expect the books to be complete and encyclopedic. Not long ago, I reviewed a book called Encyclopedia of Black Comics that didn’t mention many of the most important black creators. It, too, did not live up to its title. This is why you will never see me use the words complete or encyclopedia in the titles of any books I write.

I’m still going to recommend DC Comics Variant Covers: The Complete Visual History. I think fans of comic-book art will get a kick out of it. I think it would make a terrific gift for the comics fan you love enough to spend almost half a c-note on. Just recognize that its title isn’t accurate. 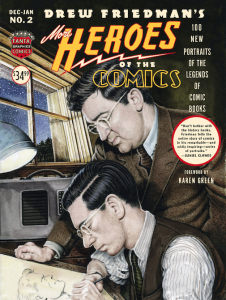 It almost goes without saying that Drew Friedman is one of the best and most interesting artists of our time. His intricate portraits can be appreciated and studied as the great works they are. Yet I didn’t much care for his Heroes Of The Comic Books: 75 Portraits Of The Pioneering Legends Of Comic Books [Fantagraphics Books; $34.99] when it was published in 2014. There were two distinct elements to my disappointment with the book.

The artistic one was that almost all of Friedman’s subjects in the book were drawn from images of their older selves. We didn’t see a lot of their vibrant prime years.

The historical one was that the text accompanying each portrait was either lacking in important detail or erroneous or wrong. When it comes to mainstream comics history, Fantagraphics often gets facts incorrect. It elevates conjecture, rhetoric and speculation to the level of truth.

Friedman has clearly found new photographic inspiration for these portraits. This time out, we get a range of ages with many of the creators shown in the prime. Having worked with some of this book’s subjects, that made the art more enjoyable for me.

Unfortunately, the historical material is still lacking. Some pages have little more than a paragraph of material. So many interesting accomplishments and quirks are left out of the text.

Worse, though better than in the first volume, there are many pesky errors of fact in this book. Many of these come from what I think has become a Fantagraphics and anti-mainstream bias that routinely ignores inconvenient facts if it doesn’t suit the writer’s agenda. Heck, the cover quote by indy favorite Daniel Clowes, comes right out and say readers shouldn’t bother with the history books.

Nowhere is the anti-mainstream bias more evident that when it comes to naming artists as creators or co-creators. I laughed out loud at the outrageous suggestion that Mike Sekowsky, as much as I admire his work, was a co-creator of the Justice League of America. That title was conceived by Julius Schwartz as a revamping of the 1940s Justice Society of America. The debut issue was written by Gardner Fox after a plotting session with Schwartz and his script was then edited by Schwartz. Every super-hero character in the series was an existing super-hero, none of them created, co-created or drawn by Sekowsky when they first appeared. The only original characters in the first story were sidekick Snapper Carr and villain Starro the Conqueror.

Current fashion is to name the original writer and artist of books and characters as co-creators. It’s accepted, even by me, as just the way it’s now done. But, though I accept this, I recognized how flawed it is from an historical standpoint. Editors have created characters and handed them off to writers and artists. Writers have written full scripts for the artist to draw. Artists come up with characters which the editor and writer put into the scripts. There is simply no “one size fits all” determination of creation except that which is convenient for bookkeeping purposes.

As with the previous volume, I recommend Friedman’s More Heroes Of The Comics for his brilliant portraits. It would make a wonderful gift for the comics fan savvy enough to take the text material with a grain of salt.

That’s all for this week, my friends. If all goes as planned, I’ll be Los Angeles the day this week’s column posts. Marvel invited me to the premiere of Ant-Man and the Wasp. Joyfully, my plus one for this event is my Saintly Wife Barb. I’m not sure when I’ll review the movie – definitely not before its general release – but I will review it in the near future.

Have a great week. See you soon.