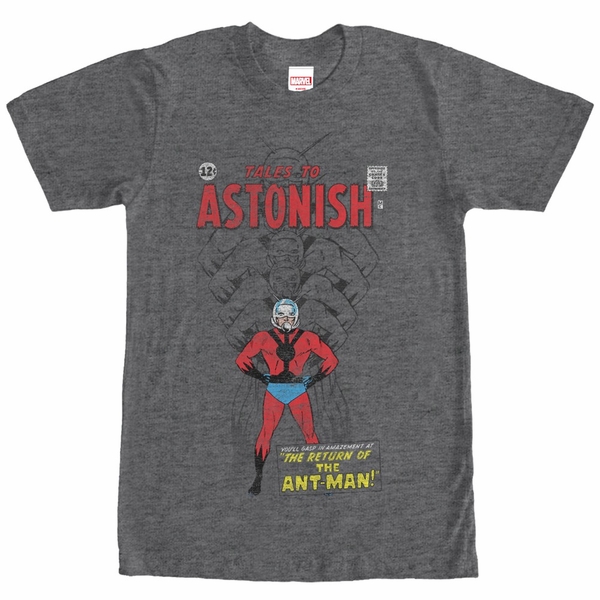 My latest comics gear buy was this cool “Return of the Ant-Man” T-shirt from Stylin Online. I bought it because Marvel has invited me and my Saintly Wife Barb to the world premiere of Ant-Man and the Wasp. Marvel has been great about inviting me to events like this and I thank them for it. 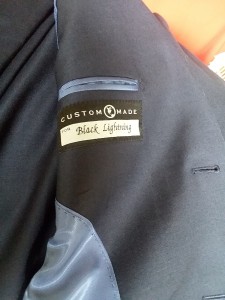 Even if it arrives before we leave for the premiere, I don’t plan on wearing this shirt to the premiere. I’ll be debuting the second of the two new suits I bought this year from Men’s Warehouse. The first was the one I wore to the Black Lightning premiere in D.C. earlier this year. The second, which I just picked up, is a custom-made suit with a label you might find interesting:

The young man who sold me the suits was a James Bond fan and also a comics fan. His label read: You Only Live Twice. When he told me I could get any label I wanted, my choice was obvious.

I’ll be wearing the new suit to the Ant-Man and the Wasp premiere. Look for a report on that event and a review of the movie sometime in the near future. Speaking of other comics-oriented movies and TV shows…

Marvel’s Cloak and Dagger launched on Freeform on June 7 with two episodes. I’ve since watched the third episode. Here’s the quickie introduction from epguides.com:

Two troubled teens find themselves with strange powers, and a mysterious connection that draws them to each other.

Cloak and Dagger were created by writer Bill Mantlo and artist Ed Hannigan. They appeared in Peter Parker, the Spectacular Spider-Man #64 (March 1982) as runaways whose run-in with a criminal chemist connected them and gave them super-powers, which they used to bring down drug dealers. Since then, Cloak (Tyrone Johnson) and Dagger (Tandy Bowen) have sometimes been considered mutants and sometimes not. In truth, the further removed they became from their Mantlo and Hannigan stories, the less interest I had in them. Fortunately, while keeping the most basic of basics, the new TV series doesn’t follow the comic books.

As young children, teens Tyrone (Aubrey Joseph) and Tandy (Olivia Holt) were exposed to energy released when a Roxxon Corporation oil rig collapses. They were in a lake at the time: Tyrone because his older brother had been shot by a bent cop and he dove in to try to rescue him. Tandy because her father, a Roxxon scientist, became distracted when the oil rig exploded while he was driving her home from a ballet lesson. Young Tyrone’s power manifested, as did young Tandy’s, and he rescued her.

Years later, their circumstances are much different. Roxxon pinned the oil rig disaster on Tandy’s father, leaving her and her mother penniless. Tandy lives in an abandoned church, pulling various cons with her boyfriend. Her never-stable mother is an alcoholic and drug abuser (Andrea Roth), chasing the fantasy she will get Roxxon into court and win a huge settlement.

Tyrone attends a Catholic high school and struggles to fit in. His mother (Gloria Reuben) is an activist struggling with the fear she might lose her only remaining child. Tyrone lives with the guilt of his brother’s death and the knowledge that his brother’s killer is still out there.

They meet by chance, reactivating their long-dormant powers. By the end of episode three, they understand they are somehow connected. Which just leaves them with more questions.

Joseph and Holt are terrific in their roles. The storytelling gets a little trippy at times, but it’s intriguing and powerful. This is the journey of two traumatized teens trying to make sense of their world while coping with their circumstances. The chemistry between the two young actors is simply amazing.

In my admiration for Joseph and Holt, I don’t want to sell anyone else short. Reuben is a commanding presence. Roth is a compelling tragic figure. Carl Lundstedt does well as the likeable young con man honestly in love with Tandy. J.D. Evermore is chilling as bent cop Connors. Noëlle Renée Bercy as Tyrone’s girlfriend Evita adds beauty, compassion and maybe a little menace to the proceedings via her voodoo-practicing aunt. It’s a great cast.

Of course, the highest kudos must go to Joe Pokaski, who created the TV show and wrote the first two episodes. He took the best of the characters and molded them into a terrific series. Right now, Cloak and Dagger is my favorite Marvel-based TV series. I’m in for the long haul.

Cloak and Dagger airs Thursdays on Freeform. It’s probably on all kinds of digital platforms, but I’m still working on mastering the remote control. For information on those platforms, you’ll have to go to someone who understands that stuff. 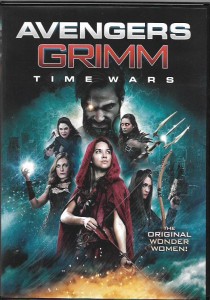 The Asylum, maker of Sharknado and other fun films, has established its own shared super-hero universe. Their source material is fairy tales. They started with Avengers Grimm (2015) with heroines Snow White, Cinderella, Sleeping Beauty, Rapunzel and Red (Riding Hood). The villain was Rumpelstiltskin.

The Asylum followed that with Sinister Squad (2016) with Alice of Wonderland fame gathering a team of fairy tale villains to combat a different version of Rumpelstiltskin. Because this is not just a shared universe; it’s a shared multiverse.

In 2018’s Avengers Grimm: Time Wars, Snow White, Sleeping Beauty and Red team with Alice and her Looking Glass organization to try to prevent a shattered multiverse from messing up all reality as we know it. The villains are Magda, the evil queen of Atlantis, and a third incarnation of Rumpelstiltskin.

Yes, the similarities you note to various Marvel and DC super-hero movies are there. The Asylum is known for its “mockbuster” takes on films with much bigger budgets.

Yes, the usual anonymous “critics” on the Internet Movie Database have been merciless in panning this film. Wanna guess how many of them have ever published or released anything? My money would be on single digits. As in zero.

I’m a forgiving viewer when it comes to low-budget movies like this one. I’m not expecting Black Panther, though I would have loved to see the Asylum’s take on that classic. I’m just asking for those 90 minutes of entertainment. If you are of a similar mind, I believe you’ll enjoy Avengers Grimm: Time Wars.

I had been planning to write a lengthy review of the second season of Marvel’s Jessica Jones, but realized I didn’t have much to add from my comments on the first season. Jessica Jones is resolutely about people making bad choices again and again. That would usually be a deal-breaker for me, but, in Jessica, so brilliantly played by Krysten Ritter, we have a hero whose bad choices are often defined by her PTSD (posttraumatic stress disorder). Indeed, given that a number of other characters in the series had their minds controlled by the late Killgrave, the bad choices usually worked for me.

Jessica makes some good choices this season and, while they do not offset the bad choices completely, the finale leaves her in a much better place than previously. I liked that a lot.

There are some intriguing life-changes for several members of the supporting cast. I can’t say I was wild about all of these, but I found them interesting and what to see what happens with them next season. Some of these changes will radically alter what have been some of the most solid relationships in Jessica’s life.

The big bads of the second season weren’t as black and white as in the first season. One of them was a victim herself. Though they did not match the villainy of the first season’s Killgrave, they played a necessary part in Jessica’s journey. I give them points for that. Killgrave’s reappearance from Jessica’s troubled mind did nothing for me. Normally I love seeing David Tennant in anything. Here, it seemed utterly forced. Boo on that.

The bottom line? The second season of Jessica Jones was well done with a great many blips in the quality. I definitely look forward to the show’s third season.