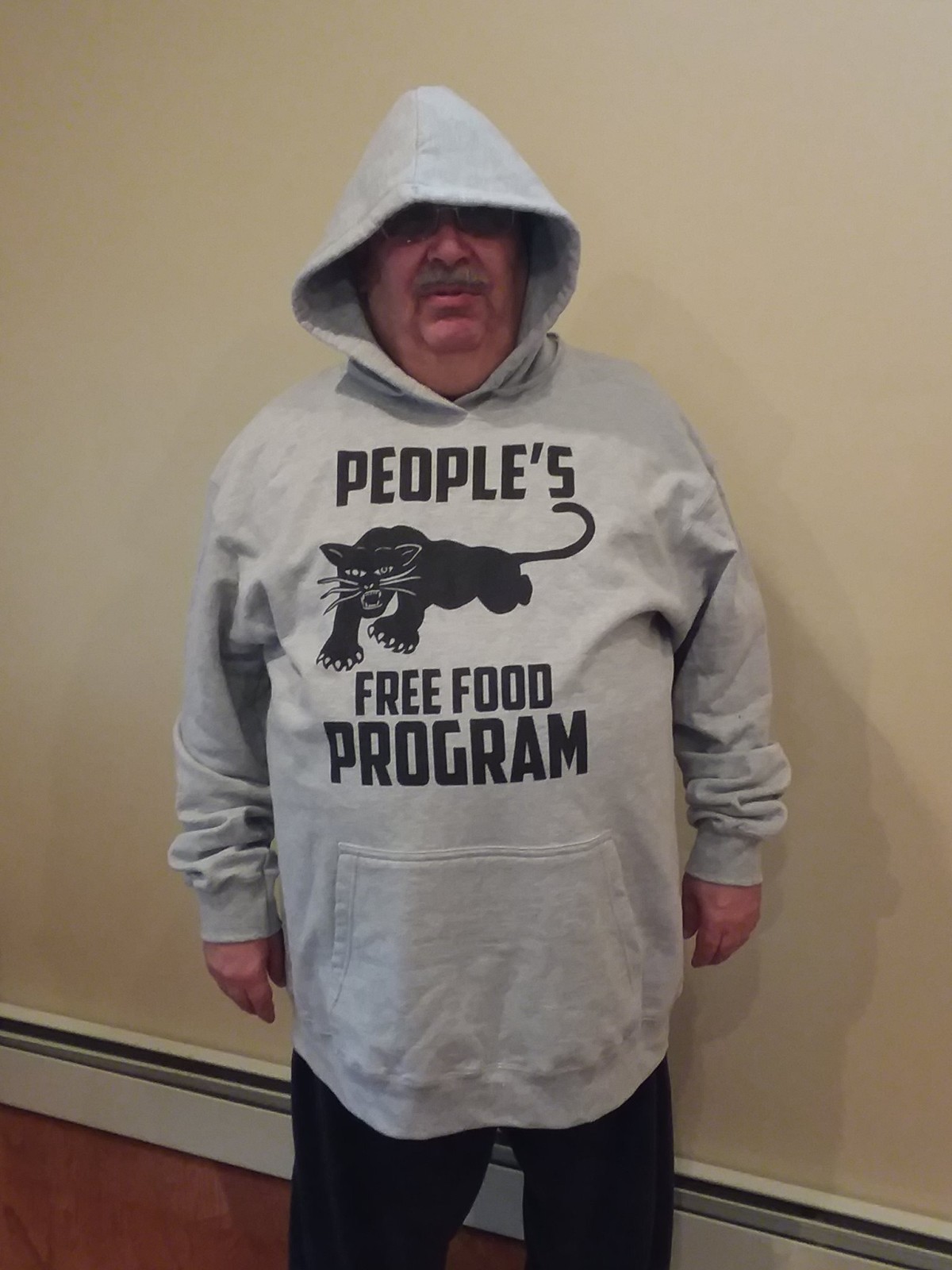 This time around, we’re showing my new “People’s Free Food program Hoodie” [$45.99]. My Facebook friend Rahadyan Timoteo Sastrowardoyo wore one to this year’s East Coast Black Age of Comics Convention. I thought it was a cool looking hoodie, even if was a little pricey for my usual tastes.

Created and run by the Black Panther Party in the early 1970s, the People’s Free Food Program provided free food to Black and other oppressed people. It was among the many community outreach services the Party offered. Whatever opinion you might hold of the Party and I admit mine are conflicted, it did some good things and tried to help people often overlooked by the government and, indeed, other Americans. 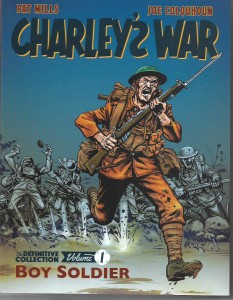 History also informs this week’s pick of the week. Charley’s War Volume 1: The Definitive Collection by Pat Mills and Joe Colquhoun [Rebellion; approximately $27 in U.S. dollars] reprints the stories originally published in the British weekly Battle Picture Library from January 6, 1979 to October 25, 1980. Over the past decades and in a number of different printings, I have read these chapters four or five times over. That I never tire of them is because Charley’s War is the finest war comics series of all time.

This is the story of Charley Bourne, an underage British soldier who lies about his age to join the British Army during World War I. The recruiters overlook that the sixteen-year-old Charley, not the brightest tool in the shed, can’t get his birth year correct on his application. England needs soldiers.

Before long, Charley is fighting in the trenches and, incredibly, getting smarter all the time. He adapts to the horrors around him and becomes a soldier who is equal parts brave, capable, and often damn lucky. He fights in the Battle of the Somme, one of the most bloody and deadly battles in the history of warfare. It’ has been reported that more than three million men fought in this battle with a million of them being wounded or killed. Mills and Colquhoun depict this brutal struggle in painful detail.

In stark chapters of mostly four pages, Charley’s War introduces us to foppish aristocrats, common men, petty bureaucrats, sadistic officers and clueless relatives who can’t understand why a lad like Charley can’t find the time to thank his auntie for the scarf she sent him. Charley and his mates soldier on, even when the food is terrible, their pay is late and too many of their officers look at them as fodder to be fed to the enemy for the great glory of king and crown. There are moments of humor in these stories, but those moments never last long.

Charley’s War is not an easy series to read, but it’s essential to anyone who considers themselves a supporter of great comics. This is a series you should read. This definitive collection, boasting the best reproduction the series has ever had and presenting over 300 pages of comics and additional features, are books you should have in your comics library. 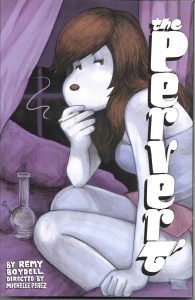 The Pervert by Remy Boydell with words by Michelle Perez [Image; $17.99] is, according to its back cover, “a surprisingly honest and touching account of a trans girl surviving through sex work in Seattle.” It’s the debut graphic novel for its creators and, based on this debut, I’m looking forward to what they do next and hoping it continues the story of this GN’s protagonist.

Their heroine faces and makes difficult choices. I can’t say that I feel all those choices were wise ones. But a reader with an open heart and mind can connect with her and wish for her happiness. If not now than in the times to come.

I confess I was put off by the graphic novel’s title since that’s a common insult thrown at transpeople and, indeed, many people who don’t fit the traditional “cisgender” or “cissexual” designation. Of course, I’m not wild about most such designations, including the ones that apply to me, and also don’t much hold to the notion of reclaiming such insults. That’s me. The anthropomorphic depiction of the humans in this graphic novel didn’t do much for me either. After so many years of this, it has grown tiresome for me. Boydell and Perez are telling a very human story here. I would have preferred the characters be drawn as human beings. Again, that’s me.

The Pervert is for mature readers and won’t be to everyone’s taste. I recommend it to those of you always looking for new stories told by new creators who want to reflect the world around us. 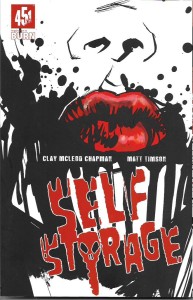 What if Storage Wars had zombies?

Storage Wars is a reality show that airs on A&E. It revolves around buyers who bid on storage units whose original owners have stopped paying rent on those units. They only get a quick glimpse of these units. Then they bid on them and hope to find treasure. I used to be a big fan of this show until it was revealed that the producers seed some of the units with great stuff.

Self Storage by writer/creator Clay McLeod Chapman and artist Matt Timson [451 Media; $19.99] throws zombies into the mix. Chris Smith is a likeable guy who barely gets by hocking stuff from abandoned storage units. Then he opens up a unit and finds a zombie name of Jessica. What the…you know.

This is an entertaining graphic novel. That’s coming from me, who has never been a fan of zombies. Except for maybe Marvel’s Tales of the Zombie, Shaun of the Dead and Robert Kirkman’s The Walking Dead (which I am about a hundred issues behind on.) The writing is good. The art is good. You get to know the characters. You get to watch the mystery of Jessica unfold. You get some shocks. It’s not unlike a fun B-movie.

Self Storage is definitely worth checking out. It would also make a fun movie. Are you listening, Hollywood?