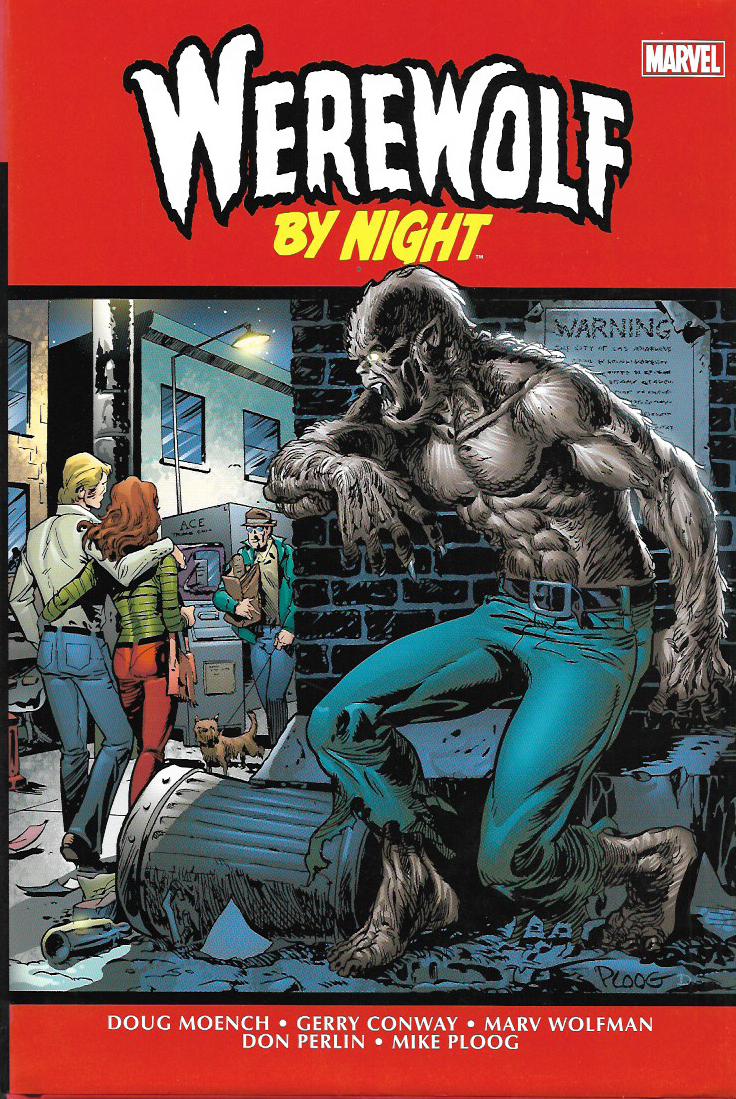 The Werewolf by Night series made its debut in Marvel Spotlight #2 [February 1972]. Conceived by Roy and Jean Thomas and written by Gerry Conway, it introduced the cursed Jack Russell to comicdom and the Marvel Universe in particular. It also debuted decades of jokes about the lead character’s name. The jokes were officially declared old in March of 1972.

Not every story in this volume, which collects every Werewolf tale from Marvel Spotlight #2 to Werewolf by Night #43 [March 1977] was terrific, but nearly every one was entertaining. Conway delivered some nice gothic tales. Len Wein brought his lyrical word-smithing chops to others, including a Marvel Team-Up with Spider-Man. Marv Wolfman – “At last – Werewolf written by a Wolfman” – created two of Russell’s classic villains in the Hangman and Taboo, as well as the Eisner-esque Topaz. But it’s Moench who had the longest run on the feature, developing the supporting cast, taking Russell and his friends all over the world, delving into supernatural dimensions, and, when sales started dipping, ushered in a surprising change in the Werewolf’s course. I would have liked to have seen Moench take that further, but, alas, sales figures are a harsh mistress.

Werewolf By Night’s first artist was the remarkable Mike Ploog and he was perfect for the feature. He was also greatly in demand, so other artists were recruited. Tom Sutton and Gil Kane did some fine work on the strip, but it was Don Perlin who made the Werewolf his own. Not as flashy as the above-mentioned artists, Perlin was one heck of a storyteller and handled every wacky notion Moench threw at him. They were a terrific team.

Sidebar. Don drew my Tigra debut from Giant-Size Creatures #1 [July 1974], also included in this omnibus and was just wonderful to work with. I wish I could have done more than one story with him back in the day. I think we were a good team.

Besides the Marvel Spotlight issues and the Werewolf’s own title, this hefty hardcover includes Marvel Team-Up #12, the crossover with a notable count from Tomb of Dracula #18, Giant-Size Creatures #1, a prose story from Monsters Unleashed #6-7, all the new stories from Giant-Size Werewolf #2-5, and the big monster bash from Marvel Premiere #28. That last one teamed the Werewolf with Ghost Rider, Man-Thing and Morbius in a wild adventure by Bill Mantlo and Frank Robbins. There’s also a generous helping of special feature pages in this book. Amazing stuff.

If you’re into 1970s Marvel in all its glory and weirdness, you’ll want this not-inexpensive book. However, InStock Trades, the fine outfit that sponsors this column, is currently offering it at a 42% discount. Worth looking into. 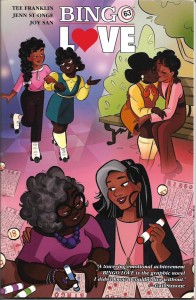 Bingo Love by Tee Franklin with artist Jenn St-Onge [Image Comics; $9.99] will surely and deservedly be an Eisner and other awards contender. Rated “T” for “Teen,” it’s the life-story of two girls who meet and fall in love in 1963. Their families are horrified by the sight of their first kiss and with a determination born of both bigotry and ignorance, separate them. As this sometimes bittersweet graphic novel unfolds, we watch the adult lives of Hazel and Mari, the choices they make and their amazing reunion. There is sadness and turmoil in their story, but what stands out most of all is how joyously they commit to one another.

Franklin’s characters are easy to embrace. Her dialogue strikes the right notes. St-Onge’s drawings are charming and flirty and filled with emotion. Colorist Joy San does a fine job, as does letterer Cardinal Rae. I love this original graphic novel a lot.

My one quibble is that, at two different places in the book, just as something vital is happening in this story, readers are directed to digital episodes. Not cool. Those episodes should have been in this book. Hopefully, this will be corrected in some future edition of the graphic novel.

Bingo Love is something special. I recommend it highly. 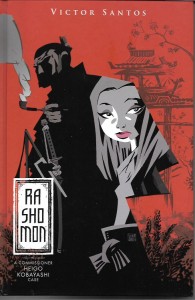 Rashomon: A Commissioner Heigo Kobayashi Case by Victor Santos [Dark Horse; $19.99] is such a stylishly told crime noir story is really needs to have its own category. Swank noir? Fine art noir? I’m not sure what that category should be named. What I’m sure of is that, beyond a superficial similarity to Frank Miller’s Sin City works, Rashomon is unlike any crime comics story I have ever read and one of the best I’ve read in recent years.

Santos was inspired by the works of Ryunosuke Akutagawa, regarded as the father of the Japanese short story. Some Akutagawa stories featured the heroic commissioner Heigo Kobayashi.

In this take on the classic Rashomon, the body of a famous samurai is found along a road in feudal Japan. Investigating the slaying, Kobayashi interviews a number of suspects and witnesses, none of whom give the same testimony. The most unnerving of the characters in the tale is the widow of the samurai, a calculating, sensuous woman who might have been behind the murder and subsequent actions bring her into repeated contact with the commissioner and may also have inspired other violent acts.

There are no real answers in this graphic novel. Certainly Santos leaves much open for speculation. Yet what drew me to the book and gave me such delight was his telling of his tale. There were pages that made my eyes grow wide. This is a great story with astonishing art in a beautiful hardcover volume.

Rashomon would appeal to fans of crime noir, historical fiction and manga. I definitely recommend it to those fans.

Hope you enjoyed this column. I’ll be back next week with another three-pack of reviews. See you then.