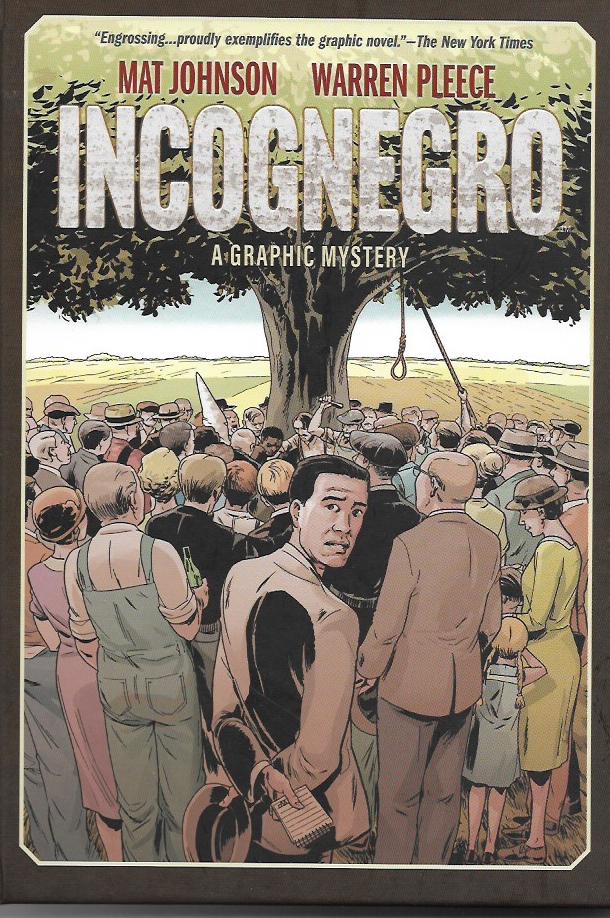 Black Lightning: Cold Dead Hands #6 was released last week and the reviews have been wonderful. Outside of the few benighted critics who believe super-hero comics should consist of powered individuals punching each other in the head and those who object to non-white  heroes or diversity in comics in general, the initial reviews have been overwhelmingly positive.

The first season of Black Lightning is drawing to a close and it’s common for viewers to tell me each new episode is their favorite to date. I don’t disagree as week after week has delivered brilliant acting, crazy good acting and surprising twists. Thirteen episodes just doesn’t seem like enough to me. While we’re waiting for season two – the series received an early renewal – check your convention listings for appearances by Black Lightning cast members. They’re a great group of people who I know you’ll enjoy meeting. Heck, if I wasn’t otherwise committed, I’d follow them around the country. Which maybe sounds creepy now that I think about it.

While I wait to see what my next comics gig will be, I’ve started work on four different books and getting ready for my famous Vast Accumulation of Stuff garage sales. I’ll have more to say about all these projects in the near future. In the meantime, I’m delighted to bring you this week’s reviews. Every item I’m writing about this week should be considered my “pick of the week” because they’re all that good.

From the Burger Books imprint at Dark Horse, Incognegro: A Graphic Mystery by Mat Johnson with artist Warren Pleece [$19.99] has a new edition to celebrate the graphic novel’s tenth anniversary. It’s  a handsome hardcover book with enhanced toned art, an afterword by Johnson, character sketches and other added material. The add-ons are terrific, but it’s the story that makes this a classic.

Zane Pinchback, a reporter for a black-owned New York newspaper in the early 20th century, is light-skinned enough to pass for white. He has used this to investigate lynchings and other crimes against black people throughout the American South. After a near escape, he plans to retire his “Incognegro” identity. Until his own brother is arrested in Mississippi and charged with killing a white woman. It is a grim chronicle of murderous racists, the acceptance of their heinous crimes and even the elevation of those crimes to some sort of carnival entertainment, including postcard souvenirs of those crimes. Today, when we have a racist president surrounded by white supremacists, Johnson’s story resonates more strongly than when it was first published.

Pleece’s art and storytelling are top-notch, drawing readers into the era and the horrors of that era. He and Johnson put a spotlight on the setting, the disgusting racism and the things people would do to survive and be themselves. That this graphic novel is taught in schools doesn’t surprise me. Indeed, it should be taught in more schools. It is an important reflection of our history, a truth that saddens me, albeit not as much that it’s a truth many Americans do not yet recognize.

Also being published by Berger Books and Dark Horse is Johnson and Pleece’s Incognegro Renaissance [$3.99 per issue], a five-issue origin story of Zane’s other identity. A hardcover collection of this series is scheduled for October publication. 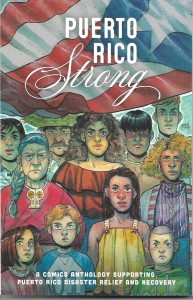 There are at least two other Puerto Rico benefit anthologies in the works, but Lion Forge hits the comics shops first with its amazing Puerto Rico Strong [$12.99]. The anthology is just over 200 pages of stories and art, which makes it a true bargain.

So many talents came together, united by their horror for what has befallen the island and their desire to do something to support the relief efforts. The anthology is more than stories of Puerto Rican life in this time of need. Latinx creators tell their own stories and also delve into the culture and history of the island. There is so much power in their drawings and words that I’m reading the book for a second time, savoring a story or two each day as part of my morning routine.

Dozens of creators contributed to this anthology. You’ll recognize some names from your favorite comics of the past. You’ll wonder why you haven’t heard of others before this. I hope I get to see more work from both groups.

Puerto Rico Strong is a breathtaking reflection of creators coming together for a good cause. It is a book to be cherished. 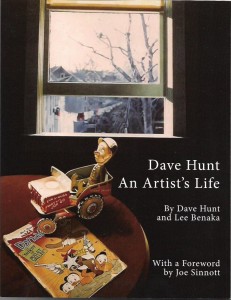 If you read mainstream comic books during the 1970s through 2000 or so, you’ll have seen the name “Dave Hunt” hundreds of times. From his start working in production at Marvel, Dave was a colorist, letterer, background inker, inker and penciller for Marvel, DC and other publishers. I didn’t socialize with Dave, maybe a lunch here and there when we both worked at Marvel, but he struck me as a real salt-of-the-earth guy, an amiable and friendly fellow, and a solid professional. Even in a comics career filled with as much stellar work as Dave’s, my fondest memory of him is personal.

When Dave learned I spent my first Thanksgiving in New York alone, a turkey sandwich from a Brooklyn deli for a meal that represented pretty much my last money until my next paycheck (which, luckily, was just days away), he was mortified. If he had known, he said, he would have invited me to spend the day with his family. He was one of the good ones. Heck, one of the best ones. That he is no longer with us diminishes our world.

Dave Hunt: An Artist’s Life by Hunt and Lee Benaka [ComicArtAds; $25] is an autobiography and more. The beautiful book presents the artist’s story in his own words. It has a foreword by the great Joe Sinnott, who hired Dave to do background inks for him. It has more photographs and more examples of Dave’s work than I can count. The examples include Hunt’s fine arts creations. All topped off with an exhaustive checklist of Dave’s comics work.

The title of the book says more than it appears on the surface. In detailing his life, Hunt wrote an informative essay or sorts on the lives of other artists. His dedication to his craft, his numerous inspirations and the business of being an artist. It’s a fantastic book and reference resource.

Copies of the book can be had by sending $25 to Benaka via PayPal. His PayPal ID is: savewamubluegrass@hotmail.com

That wraps another week’s worth of tips. I’ll be back in seven days with more reviews. I hope you’ll join me.