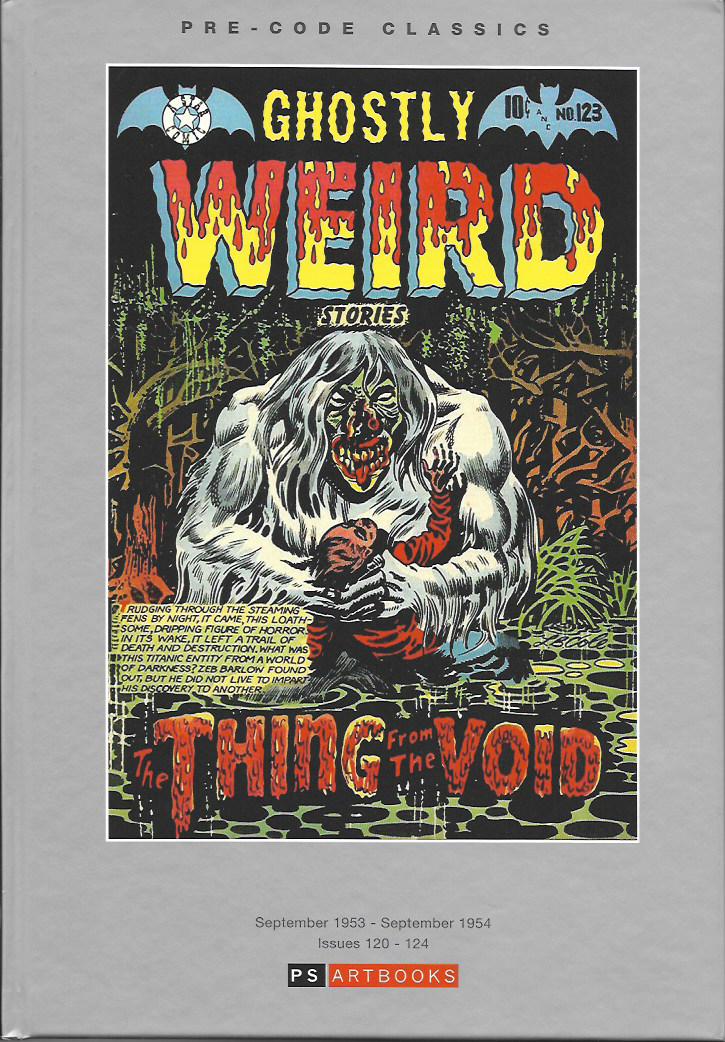 Black Lightning: Cold Dead Hands #6 will be hitting the comic-book shops this week. Due in no small part to the great art of Clayton Henry, the editorial support of Jim Chadwick and Harvey Richards, and the amazing color art of Pete Pantazis, I think the six issues represent my best comics work ever. It was a thrill to reinvent my signature creation for a new era and I hope I’ll return to him in the near future.

I have a pretty light appearance schedule in April. I’ll be filming a public service announcement for literacy and Free Comic Book Day at WBNX-TV, our local CW station. The PSA will be aired during the various DC Comics and other shows. Beyond that, I’ll be speaking to a group of students for their special projects.

While I’m making those choices, here are the items I’ve selected to write about this week…

I didn’t purchase Pre-Code Classics Ghostly Weird Stories Volume 1 [PS Artbooks; $44.99] because I thought the stories reprinted in this hardcover collection from the U.K. were classics. I bought it because of my fascination with the horror comics of the 1950s and the production thereof.

Published by Star Publications, Ghostly Weird Stories ran but five issues, continuing its numbering from Blue Bolt and Blue Bolt Weird Tales of Terror. Issues #120-124 are cover-dated September 1953 to September 1954. L.B. Cole drew all the covers with the cover copy consisting of the caption from the splash panel of the cover story. The cover tale, usually written and drawn by Jay Disbrow, was often the only original material in an issue.

Disbrow’s work is intriguing its own right. Artistically, he has a style of its own. Lots of grim faces and horrifying creatures. As a writer, boy howdy, is he one wordy wordsmith. Huge captions and word balloons that required smaller than normal lettering so as to not crowd out the art.

His stories are entertaining, but only one of them – “Death Ship” – is memorable. That one is a character study of a spaceship captain who can’t resist the call of the stars no matter how good his life on Earth is. He’s looking for something out there, but whether he finds it or not, is left to the reader to decide.

The other stories are a mixed bag. Reprints of jungle heroes Jo-Jo, Rulah and Tonaka appear. Heroes like Torpedo Man and the Mask are in some of the issues as well. Horror tales and even a crime story are reprinted. Besides the Disbrow lead stories, the only other new story is “The Last Man Alive,” an off-beat tale about a surly guy who doesn’t like sharing the world with people. It’s drawn by the equally off-beat A. C. Hollingsworth. Many of these stories would be reworked with additional gore to appear in the notorious black-and-white comics magazines by Eerie Publications in the late 1960s and mid-1970s.

Sidebar. Marvel Comics had a similar business plan for some of the 1970s “mystery” comics it published around the same time as those Eerie magazines. After several issues, titles like Tower of Shadows would feature only one new story and then fill out the rest of their pages with reprints.

Pre-Code Classics Ghostly Weird Stories Volume 1 isn’t a must-have for anyone who doesn’t share my fascination with the horror comics of the past. But, if you are one of our maniacal number, I suspect you’ll enjoy the collection. 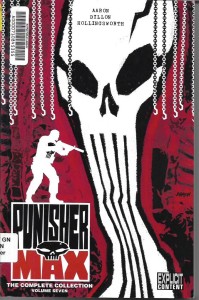 Written by Jason Aaron with art by Steve Dillon and colorist Matt Hollingsworth, this is the most brutal series of Punisher comics I have ever read. There are no good guys among the combatants here. There are monsters in human guise…and Frank Castle is every bit as monstrous as those he hunts and slaughters.

Clearly set in an alternate Marvel Universe, the players in these stories include the Kingpin, Bullseye and Elektra. There are quick violent deaths in these stories and lingering torturous killings. These are more horrifying crime comic books than I imagined before I read them. They make the crime comic books of the 1950s look like TV’s afternoon specials. That said…the writing, the art and the coloring are all of the highest quality. Each issue had me wanting to see what happened next and, when I got to the last issue of the series, I was satisfied by the overall ending. This isn’t for the faint-of-heart, but if your intestinal fortitude is higher than most readers, I think you’ll find this collection to be worth reading. 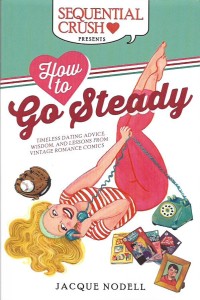 My pick of the week is the long-titled How to Go Steady: Timeless Dating Advice, Wisdom, and Lessons from Vintage Romance Comics by comics historian and love comics expert Jacque Nodell [CreateSpace; $12.99]. The back cover calls it “history book meets how-to guide,” which is pretty good short hand for what Nodell has created here.

The field of romance comics in general has not been covered as well as it should be. It was a leading genre from the late 1940s through the mid-1970s. Its target audience were girls and young woman, but it had plenty of male readers as well.

Nodell has been collecting and writing about romance comics for as long as I can remember. Her “Sequential Crush” blog was one I would visit frequently. I always enjoyed her articles and learned a lot from them. What she has done in this book is focus on one part of the romance comics allure: the advice columns.

Though often written by men, these columns actually contained some useful lessons. Nodell went through hundreds of comic-book advice columns to put together a dating/relationship guide with some solid suggestions for young women and men. Though the advice offered in the comic books tended to be very conservative, the basics hold up pretty well today.

Though I’ve been safely and happily married for over thirty years, I found this book to be entertaining. If I’m ever again fortunate enough to edit a romance comic – I was the editor of Young Love at DC Comics for a short time in 1976 – you can be sure I’ll include an advice column in that comic book.

Entertaining and informative, shining a light on a part of comics history never before covered in such detail, How to Go Steady would make a great gift for anyone even remotely interested in romance comics. I recommend it highly.